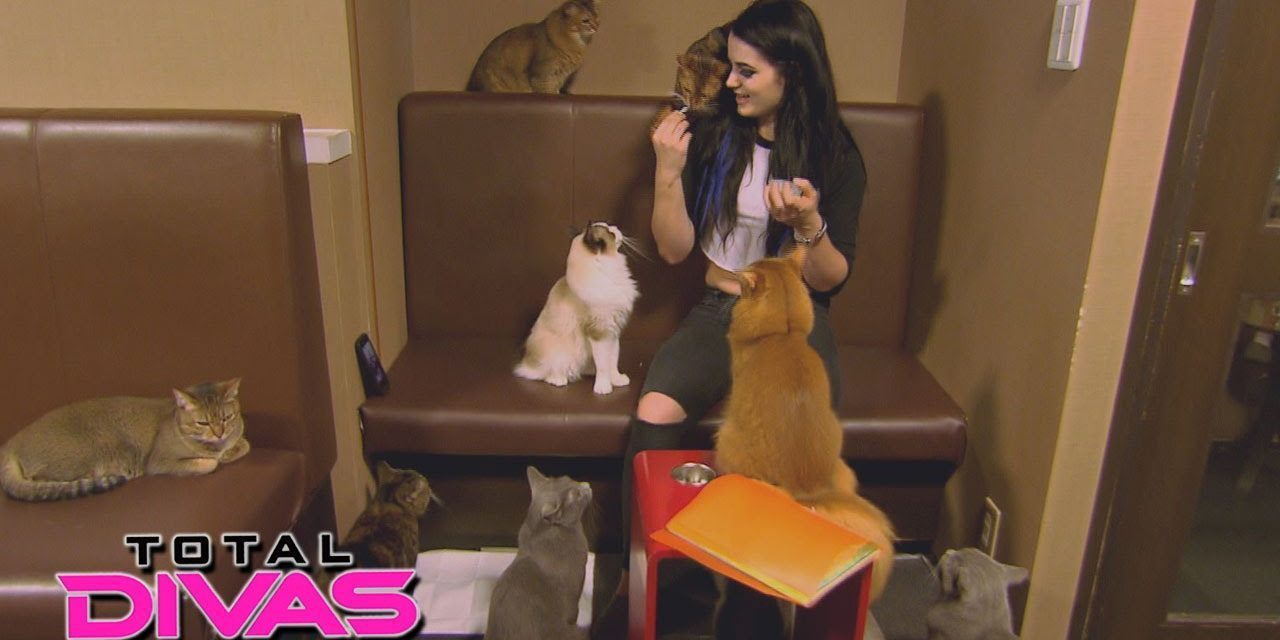 Praise the TV gods: The greatest reality show in the history of pro-wrestling-themed reality shows targeted to women and broadcast on entertainment-focused cable networks, Total Divas, has returned, thick with the promise of resolution for last season’s cliffhanger ending: Will Nikki Bella choose Dolph Ziggler over John Cena?

JK. Out here in the real world, anyone with access to the Internet and even the barest hint of interest can find out in mere seconds that the reigning king and queen of the injured list are still reveling in round-the-clock red-carpet PDA.

In case you haven’t been literally holding your breath for every single second since season four wrapped in September, here are the other dun-dun-DUNNN question marks with which we were left:

While there’s no hint of All Red Everything so far, this season’s first episode of Total Divas does carry on a proud tradition we’ve been enjoying since season one: Yoda-like insight from Mr. Brie Bella, Bryan “Daniel Bryan” Danielson.

“John and Nicole have a weird relationship in general,” Daniel Bryan Danielson Bryan proclaims. Other things about which D. Bryan Danielson has opinions: Tough Enough (judging is not his “thing”); why no one will listen to him when he’s no longer a working wrestler (in fact, there is quite a bit of heartbreaking chatter about Bryan D. Bryan’s wrestling career being over, and it’s all horribly depressing); and manners — as in, he objects when Brie doesn’t pause at a restaurant to let him push in her chair.

“I thought you were gonna come give me, like, a rear chokehold,” Brie explains.

Meanwhile, Brie is working with some business partners on some sort of vague plan involving promoting local businesses. One of their good ideas is to launch a “Brie Box,” which, if it is what it sounds like (Birchbox but full of things Brie Bella likes?), sign me up. One of their terrible ideas is to put Bryan D. Bryan in charge of running a booth (venue/purpose unclear) where people can learn about local products. In a heart-to-heart at the Braniel manse, Daniel Bryan Danielson makes clear to his wife that he’s not interested in a second career in marketing to local shoppers and farmers marketers.

“You are so focused on making a new chapter for my life, and I am not ready for that yet,” he tells Brie. “Do you understand? Like, I am still trying to come back to wrestling.”

Ever the good wife, Brie agrees to support her husband’s dream of returning to the ring, and then she lets him put her in a headlock while the dog threatens to bite her. Marriage is all about compromise.

Nattie’s impending blindness, which was a high-drama issue in the season four finale, is not even mentioned in the season five premiere, although there is some discussion of her husband Tyson “TJ” Kidd’s devastating, life-threatening injury (which Nattie says is like Christopher Reeve’s if his neck had been bruised instead of broken). In a weird throwaway scene, Nattie’s parents come over to talk about TJ’s neck.

“Do you guys want a cup of coffee or a bottle of vodka?” Nattie asks her parents as they each weigh in on the various specific challenges of spinal surgery in the exact area required by TJ’s injury. (Seriously, the Neidharts are weirdly well versed in cervical spine procedures.)

Paige, meanwhile, has decided to put off confronting Kevin until after WWE’s Japan tour. (In an entertaining side note, the original tour poster concept features Dolph Ziggler, John Cena and Nikki Bella, although Nikki is later replaced by Brock Lesnar, prompting Paige to tell Nikki that Brock will probably fall in love with her next.) She finds a cat cafe (of course she does) and calls Alicia Fox for some relationship advice, although she does encounter some interruptions from the locals.

“Sorry, I’m so surrounded by felines right now,” Paige tells Foxy as cats circle her and demand treats and attention.

When she gets back to Orlando, Paige has lost her luggage, but that isn’t her biggest problem: Kevin (his name is definitely Kevin) has visitors coming, and they are his parents, and Paige has not yet broken off their engagement, which means she needs to do it posthaste.

Kevin picks Paige up at the airport, but their reunion is cut short by a FaceTime call from Paige’s mom, who is out of her mind with rage.

“I’ll give you a ‘Hey mum,'” Sweet Saraya says, lighting into Paige as she answers the phone. “I’ve just found out off the telly that you’ve got engaged, OK. … You can’t turn around and not tell me. I’m your bloody mother…” Her tirade continues until Paige finally hangs up on her. This immediately leads into an argument with Definitely Named Kevin about venues and booking them and picking dates and invitations, which then escalates into Paige shouting: “Don’t plan it at all. Don’t frickin’ plan getting a frickin’ bridesmaid, don’t plan a frickin’ venue, because I don’t even want to be frickin’ engaged, Kevin.”

Technically Kevin’s response is “What?” but I think this is one of those real-life instances in which it should be properly spelled “wut.”

Then they work it out or whatever, and it seems like they’re not going to stay engaged, but they are going to stay together, apparently, because there’s a bunch of hugging afterward?

Ultimately, though, what this episode is really about is Nikki and John and is she going to leave him for Dolph (whose real name, Nick, we are apparently no longer using this season), even though she Instagrammed a photo of herself sitting in the walk-in closet at Casa de Cena just yesterday, followed immediately by a photo of her kissing John.

But in TV world, Dolph has just tried to kiss Nikki basically right in front of a tour bus with a giant photo of John Cena’s face on it.

“John’s in the building and our bus is right there,” Nikki narrates, outraged, so she does what any normal reality TV star would do: She slaps Dolph. Then she runs away and tells her sister and Paige: “Nick just offered me babies, marriage, and tried to kiss me.”

“At work?” Paige asks, trying to swallow a spit take.

“Do not tell Nattie,” Nikki warns Brie and Paige, “because Nattie will tell everyone.” Words to live by.

Backstage in Japan, Nikki confronts Dolph about his workplace proposition. He still thinks she’s picking the wrong guy, but at least he’s not being a tool about it.

“Settling or whatever you’re doing is cool,” Dolph says. Seriously, the king of passive aggression.

Dolph then threatens to tell Cena about how he tried to kiss Nikki, which seems like a bad idea on a lot of fronts. Paige (pre-return to Florida, so still engaged to Kevin at this point), eavesdropping, secretly arranges for Dolph to meet up with her and Nikki at one of those weird spas where the pedicure involves a pool of tiny fish nibbling at your feet. After Nikki gives up on the pedicure, claiming she’s been bitten, Paige kicks things off by asking Nikki where she sees herself in a couple of years.

“Are we all doing, like, fantasy things that aren’t going to happen?” Dolph asks.

Paige tries to cut the tension by asking where John is (he’s working out), and then Nikki talks about John’s very inspirational Twitter and Instagram accounts, where he shares quotes and “amazing advice.”

“What’s his advice, ‘Run awkwardly to the ring’?” Dolph asks.

“He does not run awkwardly,” Nikki says. “He runs like a man. He lifts heavy things.”

At which point my husband, wiping tears from his eyes, weighs in: “This is the best Dolph Ziggler promo of all time.”

Later, watching Dolph and John tag against Kane and Bad News Barrett, Nikki decides she needs to tell John about what happened, which she does over dinner at a fancy steakhouse in Toyko. John’s response is… not what she was expecting. After expressing his love for her, John tells Nikki he’d be “so stupid for trying” to stop her from pursuing happiness if she thinks she can find it with Dolph.

“It’s not like I’m gonna slap him with an empty white glove and challenge him to a duel on Main Street,” Cena says. “That’s just not how it works nowadays. … I say here’s to you; you still got it.”

You know that face Nikki Bella makes in the ring when she loses a match and sprawls on the canvas, watching the winner walk away? Turns out it’s pretty similar to the face she makes when her boyfriend doesn’t run out of the restaurant to go beat up a would-be rival for her affections.

Also, there is no Titus appearance. But as a consolation prize, we do get a few seconds of the New Day getting out of Paige’s way in an elevator. For the first episode of the season, I’ll take it. 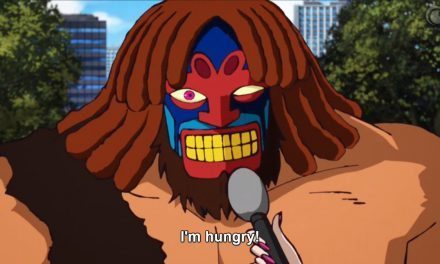