It’s New Year’s Eve and it’s the last episode of SmackDown on SyFy. This weird coasting through purgatory that we’ve been doing ever since the USA move was announced is finally due to end! I can barely believe it! A new era for SmackDown; a new direction; new exciting wrestling to look forward to in 2016!

At least, that’s what I’ve got to tell myself, because RAW this week was particularly egregiously bad– and the way the show opened on Monday was one of the many times this year WWE have made me feel ashamed to support their product. As Vince McMahon spat “you’re one generation from a bone in your nose,” at Roman Reigns, he wasn’t only expressing a vile racist attitude, but exposing layers upon layers of systemic inequality which he gleefully perpetuates both in and out of kayfabe. It’s one thing to have a character who’s a rich old white man telling a POC that they should “know their place”, but Vince McMahon isn’t just a character. We know this how he really believes. This is the reason that he’s happily profited from portraying Samoans as savages. This is the reason that he’s unrepentant about this today.

This isn’t an underdog story where the proud mixed-ethnicity Reigns is going to triumph over the evil racist boss: because at the end of the day, he’s still working for the company owned by the same man who is only a paper-thin facade away from that character. When Stephanie emerged, shrieking, in this segment, she picked her words carefully. “Arrest this… this… neanderthal!”; of all the personality flaws they could have assigned our flawed hero Roman, painting him as a brutish, prehistoric thug is the one they’ve chosen.

People arguing that Reigns (the man, not the character) must have approved this angle and therefore it’s morally okay are missing the larger point about what WWE markets itself as: family entertainment targeted heavily towards children. No other medium of children’s entertainment would get a pass with even ambiguous racial epithets being thrown around. Children who don’t have the cultural knowledge or experience to parse exactly what McMahon is implying when he says “bone in your nose”, will internalise these opinions as being just another bad guy thing, without the context of hundreds of years of oppression. Do we really want this to end up another playground insult?

All of this and the other complete nonsense that went down on Monday inevitably acts as a backdrop to SmackDown, which is why I think it’s worth confronting, but I’m not the RAW guy, so….

The New Day vs Kalisto and The Dudley Boyz

Sin Cara’s messed his shoulder up. When one of the Usos hurt himself, the other one was out too, all summer. Kalisto just traded his masked amigo in– one night later— for two completely unrelated randos backstage who don’t even have matching gear! He comes out, waving his slammy, while Sin Cara’s all bandaged up forlornly. You can tell through the mask, you know? Like you can tell when Jushin Liger’s feeling flirty. Kalisto’s casual callousness here would be more unexpected if 2015 hadn’t been a year of Sin Cara headbutting him in the balls, face-planting off topes, and standing awkwardly while Ryback made the save for his diminutive partner. Is 2016 the year the Dragons finally implode? A strange alliance here. Sin Cara’s injury is actually the only thing preventing this being an exact repeat of last week’s SmackDown opening match: which would be a worrying trend if we weren’t on the precipice of a reboot, because SmackDown already has a main event template, it doesn’t need one for the opener too.

The New Day emerge here, in unicorn horns and New Year party hats– a daring combination– to explain their New Year’s resolutions. They’re a mixed bag, which mostly come across as some kind of dictatorship manifesto rather than promises for self-growth, but I’m particularly fond of Xavier’s assertion that every member of the WWE Universe will be required to keep a New Day journal to write down the best New Day moments (“assuming you know how to write,” adds Big E).

The Dudleyz wreck Xavier for the first part of this match, leaving Kalisto bouncing frantically on the apron, and Sin Cara just standing, sadly at ringside, remembering better times. Like his friendship with Scooby Doo. That was good, wasn’t it? They had a special handshake and everything.

After dominating the New Day, Bubba Ray sets up Kofi for the low-blow headbutt with Kalisto as the projectile of choice. Kalisto soars from the top-rope, cranium meeting Kofi’s crotch with a thud. It’s no secret this is my absolute least favourite move in wrestling: it encapsulates all the things I dislike most; flagrant disregard for rules when it’s convenient, weird sexual humiliation imagery, and general crass lowest-common-denominator humour. Here, though, I feel it takes on a deeper meaning. Kalisto is doing this pointedly in view of his fellow Dragon. He’s doing it in revenge for that one missed spot on the 7th May, that one flurry of head on balls that left Kalisto reeling and disgraced. He’s showing Sin Cara what will happen to him if he carries on botching spots.

The New Day work over Kalisto for a long time after this, Kofi and Big E taking turns to cinch in time-killing headlocks, and then, notably, Kalisto kicks out of a Big Ending. Big E gets angry after this, and his distraction lets Kalisto make the hot tag to Bubba Ray, who storms in tossing around the New Day, and teaming with D-Von for a 3D. Kalisto gets a fiery win with the Salida Del Sol on Kofi.

The Dudleys’ team plunge Xavier Woods through a table spray-painted “Happy New Year” after the bell, in a scene very baffling and hard to explain to the casual viewer.

Now I’m finally on the Breaking Ground bandwagon, and have enjoyed Breeze’s acerbic backchat and midnight bat-hunting, I fear I may love him even more — if this is even possible. I wasn’t sure what to expect from Goldust, having been absent for a while — these injury breaks can go either way — but he looks immediately excellent here, throwing dramatic armdrags that send the flexile Breeze careening, dazed, through the air.

Tyler regains control after he’s irately dusted himself off from this first whirlwind. One of the many things I love about Tyler is how he always shows his mood through his wrestling– here, he’s frustrated at himself from being caught off-guard, so he’s wrestling huffily, eyebrows furrowed, slamming Goldust’s elbow into the mat with a grumpy pout.

Breeze gets a sneak leverage pin with his feet on the ropes almost as soon as this match has begun.

After the match, Summer Rae (long-sleeve shimmery silver dress #bestdressed) climbs into the ring to explain that the pair have an announcement to make. Summer Breeze have decided to go their separate ways. It’s okay, folks. As Summer says, everything is everything.  They pose for a breakup selfie. While their alliance has certainly had its bright spots, it’s clear to anyone the spark of passion wasn’t underpinning this relationship. The two were never romantically compatible. Breeze doesn’t have space in his heart to love somebody else; Rae deserves someone who can adore her fearlessly. Regardless, this ended smoothly. No slap-fights or bitchiness.

Thank goodness this breakup was amicable. I don’t want to cry on New Year’s Eve.

Luke Harper and Braun Strowman vs The Usos

This match is much of a muchness. The only interesting thing about the Usos is when they fly around and spring off things, so wrestling a team that keeps them grounded for 90% of the match is the most tedious dross. This match also has far too many closeups of Braun’s large head as he sweats on the apron for my tastes. There’s not even a tenuous reason for this fight. Braun chokes out Jimmy Uso for the KO win.

This feud was set up backstage when Bo said that Ziggler wasn’t funny, so Ziggler insulted Bo’s hat, called him the “New Year’s Baby” and threatened to punch him. I didn’t expect a massive New Year’s themed stipulation here, but this is poor.

This goes longer than the ten seconds you’d expect, and the crowd get distracted, chanting unrelated things and generally murmuring with dissent. Bo manages two premature victory laps within the space of this match, but gets hit with a superkick when he tries to go for the Bo Dog, for the pin.

Roman Reigns and Dean Ambrose vs Sheamus and Kevin Owens

SmackDown’s 2015 will be remembered chiefly for having errant members of the Shield in nearly every single main event– so it seems appropriate that this last, New Year’s Eve show, should feature the two remaining healthy ex-Shield members. There’s a weird atmosphere in the air, or a lack of atmosphere: a sort of nihilistic nothingness. This is truly a SmackDown Without Consequences. John Cena is going to be here next Thursday, and he’s a reset button: like staring into the sun and searing your retinas free of everything that your eyes saw previously. They could do anything here. Dean could get out a hedge-trimmer. Roman could strip down to trunks. Owens could Package Piledrive Jerry Lawler — he’s done it before.

None of these things happen.

There are a lot of headlocks from the heel team in this match– Owens locking in Ambrose for the rest hold was knowing and teasing for the first few matches they faced off, but now it just looks like the same old WWE mid-main-event whiling away the time. Eventually, Ambrose summons his kitten-like strength to hot tag Roman, who goes on a characteristic rampage, throwing his forearms everywhere and slamming Samoan Drops to the mat with the greatest of ease.

You know the story in a Roman Reigns match. Owens grabs Reigns’ boots off the apron and bops his handsome face on the apron, which is the impetus for a beatdown that systematically dismantles Reigns’ body and self-worth; he’s dragged into the steps; pummeled on the floor; selling like death. The commentary table are trying to suggest the idea that this melee has grave consequences for Monday’s WWEWHC match, but we already know that Vince McMahon is guest referee for that event, so why should we believe in anything’s real-world ability to influence the outcome of the match apart from the whims of an old millionaire racist?

The match ends in a DQ.

Happy New Year, SmackDowners! It’s been a riot. Here’s to a fresh start, a new network, a new commentator, and… a rare appearance from Big Match John himself…? 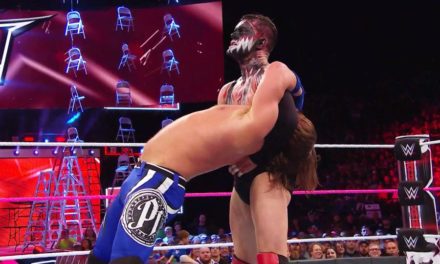 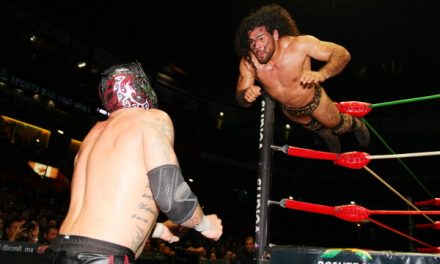