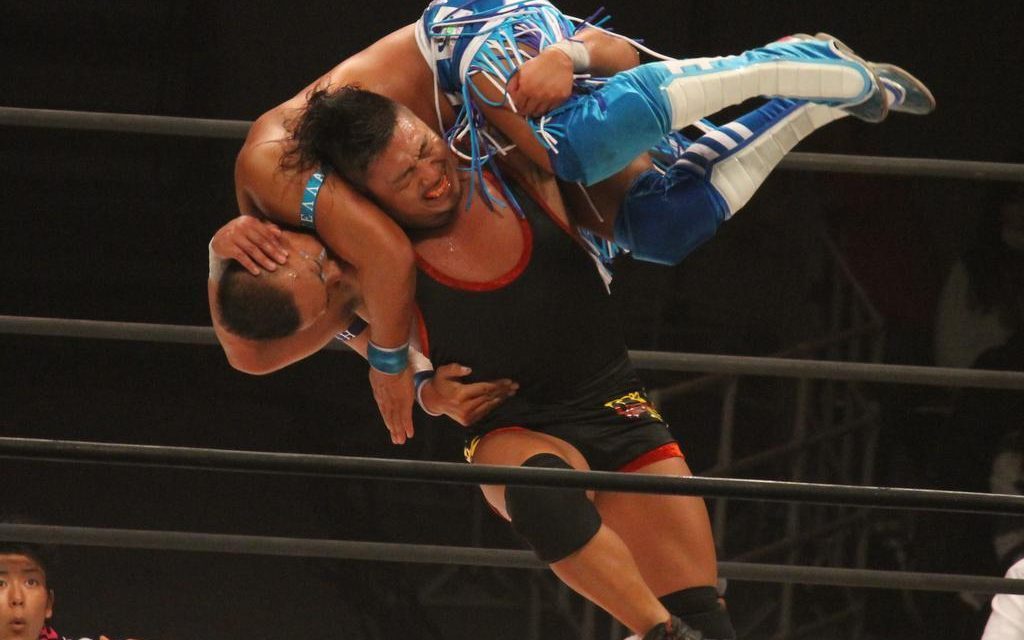 Dragon Gate’s wild and unpredictable 2015 comes to a close with Final Gate 2015. The big story here is the Open the Dream Gate match between Shingo Takagi and CIMA.

Takagi, since his debut, his essentially been groomed to become the next CIMA, the next ace, the next guy in the Dragon System. It appeared that the torch had been passed in the summer of 2013 as Takagi dethroned CIMA as Dream Gate Champion at Kobe World, ending his 19 month reign as champion. Takagi’s reign was more of a joyride, as YAMATO shocked the Dragon Gate audience by defeating him for the title the next month in Korakuen Hall.

Takagi is not the same man he was the last time he squared off against CIMA. This version of Takagi, the one proudly representing VerserK, is nothing short of a brute. He destroyed Don Fujii and he annihilated Masaaki Mochizuki. The only veteran left in his path is CIMA. Can CIMA do what he has done so many times before? Can he pull a rabbit out of his hat one last time or will Takagi be too strong for the legend? Well, we’re about to find out.

Elsewhere, Gamma and Punch Tominaga, the most awkward tag team ever, are gunning to end the historic Open the Twin Gate  reign of YAMATO and Naruki Doi, Kotoka makes his first defense of his Open the Brave Gate Championship against Eita, and Voices of Wrestling’s favorite, Masakatsu “Motherfucking” Funaki stops by to prove that Dragon Gate is the #1 destination for J-MMA.

It’s the Christmas season and Don Fujii is spreading the love by inviting his drinking buddy, NOSAWA, and his best lass, Yosuke, into the opening six-man match. NOSAWA “Out of the Question” Rongai is a terrible professional wrestler, despite what my mentor, Joe Lanza might think. His grime does nothing for me. Fujii puts in a little more effort than his buddy, but the real story here is how strong the four young workers looked here.

El Lindaman, who has adopted the Zack Ryder half-tight/half-trunk gimmick, looked excellent. His offense is very crisp. Not everything has the impact of a Mochizuki kick or a Jimmy Susumu lariat, but what he does looks great, especially considering his age level. Ishida and Yamamura held their own and are remarkably talented for their age and experience level. A forgettable opener, but a fun look at what the future may hold for Dragon Gate. **¼

U-T, adorable face and all, has really struggled since the Millennials disbanded. At this point, he’s without a unit and without a win in any sort of match since May 4 in a dark match against Mondai Ryu. Sure, you could count his win over Stalker Ichikawa in a tag match, but after the match was restarted, his side lost. U-T, by all means, is the weakest member of the Dragon Gate roster (once again, sans Stalker Ichikawa) and it’s a shame because he isn’t too bad in the ring. He looks the charisma Eita has or the raw in-ring ability of T-Hawk, but he is much better than where he has been placed on the roster. U-T is once again found with his shoulders on the mat at the end of the match, as Kanda put him away with his signature elbow drop. **¼

RIZIN is all the buzz in J-MMA right now, but Dragon Gate is here to remind us that they are as real as it gets, baby. Funaki is faced with one of his toughest foes ever in Stalker Ichikawa, a fine member of the decorated Gracie Family. Ichikawa is skilled. His years of training got him to the dance, but Funaki was able to fend him off, once under shoot fight rules, then a second time under traditional professional wrestling rules. A tough night for the Ichikawa/Gracie heritage. NR

This is Kotoka’s first defense of the Open the Brave Gate Championship. It’s also the second time that Eita has challenged for the title this year, with his first coming against Akira Tozawa at Kobe World in a match he ultimately ended up losing.

Nothing about this was pretty. Not Kotoka’s dumb red hair, Eita’s absurdly bright pants, or the actual wrestling aspect of this match. None of it was good. Eita has shown signs of greatness many times throughout his years in Dragon Gate, while Kotoka is still struggling to be good on a consistent basis. These two never seemed to click. Part of me wants to blame that on Kotoka because he is far less talented than Eita, but there’s also a chance that these two just don’t have good chemistry together. Whatever the case maybe, this was not a good way to kick off Kotoka’s Brave Gate run.

The finish was the worst part of this match, as referee Mr. Nakagawa paused at 2.99 before finally counting the three. It’s clear that the finish, which was Kotoka stomping Eita’s face in from the heavens, was not the planned finish. This was not pretty. **¼

This is YAMADoi’s 8th defense of the Twin Gate Championship, which adds to their record for most defenses. The previous record was six, set by Don Fujii & Masaaki Mochizuki in 2012.

No tweet has ever summed up the duo of YAMATO and silver hair Naruki Doi so well.

Gamma is coming off of his dreadful match with Shingo Takagi at the beginning of the month. Punch is just trying not to be killed in this match. It’s clear that YAMATO and Doi don’t take him as a threat, and why should they? There’s a fun submission sequence between YAMATO and Punch towards the finishing stretch, but at no point did I ever feel that YAMADoi was in danger of losing their gold. Perhaps that was the point of the match. Gamma is older and less skilled than the champions and Punch is clearly positioned as one of the weaker members of the roster. Still, I hate seeing a title match be nothing more than an extended squash. Another match that can be chalked up as “nothing special”. ***¼

This is the Monster Express trio’s first defense of the Triangle Gate Championship.

This is a LONG match. It ends up going just over 26 minutes and really, that’s just way too long. There’s nothing worth seeing in the 15 minutes of this match. Ryu was bullied by the three opposing sides with brutal strikes, there was a dive train, and I found it hard to be invested in the match because everyone seemed to be going through the motions. Once the Dia Hearts team was eliminated, the pace picked up and things become a little more exciting. The VerzerK trio being gone soon after helped the pace quicken once again.

The final few minutes with Monster Express and The Jimmyz battling was excellent, but it’s a case of too little, too late, as the prior 24 minutes were a bore. This was close to being really good, but it ended up being way too long to recommend. ***½

This is Takagi’s third defense of the Dream Gate Championship. His 12/3 match against Gamma has not been counted as a title defense due to the inconclusive finish.

Takagi is an absolute animal in the ring, I tell you. No one in wrestling has offense that looks as brutal as his. He hits the ropes with such speed, strikes people with such accuracy, and slams people with such power — it’s incredible. This match not only shows off that vicious side of Takagi, but CIMA’s bumping is on display here. Most people don’t consider Dragon Gate to be a promotion that focuses on any sort of bumping or selling, but CIMA takes excellent bumps. He made Takagi’s offense look incredibly, incredibly brutal.

Takagi has become the best ace in wrestling, no question about it. He is the pulse of Dragon Gate right now. CIMA, much like Mochizuki and Fujii, gave it everything he had. Move after move, nearfall after nearfall, and yet he just could not put the champion down. There was hope here for CIMA. There was a part of me and the Fukuoka crowd that wanted to believe that he could dethrone Takagi here. Hell, I’ve never been a huge CIMA fan. But when he stepped into the squared circle against Takagi this time, you better believe I was rooting for him.

Takagi, in the end, put him away, just like he did Mochizuki and Fujii. And just like the Osaka crowd last month after the battle between Mochizuki and Takagi, the Fukuoka faithful went completely silent after the referee counted three. No, that is not a slam on the Fukuoka crowd, who has become notorious for being silent, this is what happens when you have a dominant heel come in as champion and then leave as champion. CIMA did all he could, but he is not strong enough for the leader of VerserK and the Open the Dream Gate Champion, Shingo Takagi. ****½

via iheartdg.com: Takagi celebrated but lamented the lack of applause. Sorry CIMA. Your time is over. Just like Fujii, Gamma, & Mochizuki before him. The veterans have been vanquished. Well. There was Shisa. But that wasn’t going to happen. 2015 was over and now it was time to take out the trash. VERZERK would be steering the ship in 2016. They did their customary pose and were ready to end the show on the sourest of notes when Susumu hit the ring and laid Taagi out with the Jumbo no Kachi!
If you follow the timeline, after the veterans you would find his generation. Takagi claims to have no challengers left. Well. He was standing right there. He wanted a title match. In fact, he had been planning to come out to challenge CIMA because he was sure CIMA was going to win. He was the very first Dream Gate challenger for CIMA back in 2004 and again in 2012. He wanted to do so one more time. Even in defeat, he knew fans wanted to see CIMA close the show, so he passed the microphone to him.
CIMA had promised everyone a happy ending. Even with the fan support and tactical support from his veteran allies, he was still defeated. Takagi talked about spring cleaning and taking out the trash. Well. Maybe he was garbage by now. But there are many types of trash. Burnable, plastic, etc. Well. If you read his label it says “CIMA: Do not throw away”. He had hoped for a victory as a late Christmas present. It didn’t come, but he was saved by Susumu. Susumu had a birthday in February. You know what else is in February? A show in Hakata Star Lanes on the 14th. That is as good a place as any for him to get his Dream Gate title match. It was set. Susumu promised get into peak condition. 2016 will be 10 years since he was last Dream Gate champion, and he would end that drought on 02/14. CIMA thanked the fans for their support in 2015, and promised to keep working hard to fulfill the dreams of the fans and children in 2016.

Final Thoughts: Final Gate 2015 doesn’t hold a candle to Gate of Destiny or Dangerous Gate. It’s a steep step below Kobe World and Dead or Alive. Simply put, Final Gate was the weakest of Dragon Gate’s five PPV’s this year. The main event was outstanding, but nothing else cracked the 4* mark and the Brave Gate match left a sour taste in my mouth. Go watch Stalker Ichikawa grapple with Funaki, the final 5 minutes of the Triangle Gate match, and all of the main event. It’s hard to give a show a thumbs down with a main event that good, so Final Gate gets a thumbs in the middle. 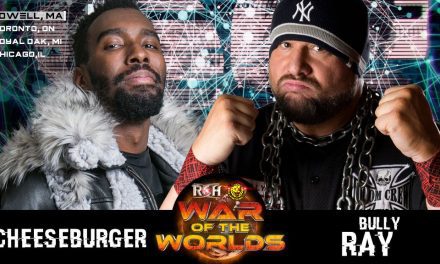