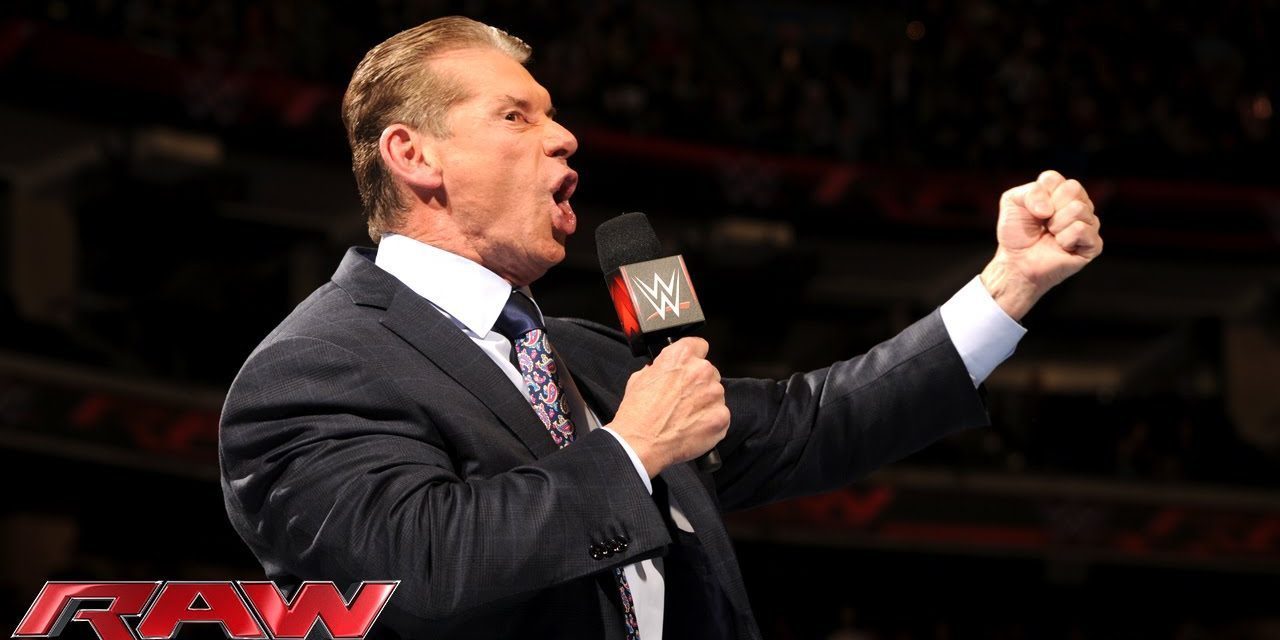 Who can care about wrestling in a world where Conor McGregor exists and things like UFC 194 happen? Being octagon side for that has rendered me incapable of feeling anything ever again, for all things pale in comparison to the span of time between his entrance to his leaving.

So things happened and now I'm sitting here for UFC 194. I'm okay with this. pic.twitter.com/KCAqob7Hkw

So here I sit, exhausted, being clobbered by a miserable cold , desensitized to everything around me, and thinking that Mauro Ranallo to WWE is going to be a terrible failure that will have him giving shoot interviews within a year. If that’s not the right frame of mind for a Raw Review, then I’m as dumb as Chris Weidman trying to throw a spinning heel kick. Let’s make like trees and watch this show. If at some point I just put “Foggy Dew” on a loop instead of reviewing the show, I’m sorry.

I hear there was a show last night. I hope they start the show off within someone talking for 15-20 minutes about what happened.

The post-match stuff by Roman looked great. Let’s see how they play off that tonight.

God bless her, for all her faults, she knows exactly how to say things that should draw sympathy but just make you hate her more.

Roman Reigns seems like a nice guy. But he needs to figure out how to turn that off. You’re supposed to be nearly homicidal with rage. Don’t be dapping on the way down to the ring. And instantly dropping happy birthday to his daughter.

Surely Roman isn’t including Shane in his assessment of the McMahon family.

Every bit of edge Reigns had at the end of the show last night just dissolved. They really think that’s the way to get him over? I prefer to imagine some sort of Game of Thrones like maneuvering happening with Roman as the poor pawn in a power struggle. Because if that’s not the case then the company is actually trying to get Reigns over like this. I’m sure in a short while this won’t be remembered after Vince gets speared by Reigns, but it still makes no damn sense.

Remember 10 months ago when everyone kept stealing the Intercontinental title? Surely there’s some progress here, right?

“If Dolph wants a shot at the champion he’s going to have to beat Dean Ambrose tonight.” I’m just agog. This makes so much not sense that a hole in our reality opened up and a fucking kaiju just came gallumphing through.

The match has a nice structure. More of an exhibition feeling at the start, with lots of matwork and very slowly applied submissions. It was as if there was an unspoken agreement that the match wasn’t to be too intense. But then the ego of Ziggler and the lunacy of Ambrose took over and caused the pace to quicken.

Of course Kevin Owens was going to come out, but I would have liked another couple of minutes of that match. It had the steam to become a really fun piece of business. As it was… *** Winner: Dolph Ziggler

Given how much muscle Steph has put on over the years I bet Roman’s ears were ringing for a bit.

Oh dear God they’re in Philly tonight and the ECW old guys are here. All jokes aside I really like the way this segment was produced. They’re not trying to make it seem like some of organic thing the camera just happened to walk in. The fact that this was a planned thing, a created thing, designed to get a message across is the kind of thing the show needs more of. The clips of ECW were pretty cool, and sadly as close as I’m likely to get to my dream of a New Jack return.

I know it won’t happen, because these things never do, but how awesome would a post-match ECW reunion be? Just let a bunch of the old dudes come out to help clear out the Wyatts, and get some of the originals on Raw for a minute.

Truth is getting an extended rap opening. Either someone needed to take a crap right before his match, or Vince is too busy getting ready to go on camera to notice what’s happening.

. I feel like there’s some overcompensation happening here by the King of Dated References.

The old guy is looking spry tonight. The walk had a whole lot of spring to it. In fact I was afraid all of his limbs might bounce off his body.

Finally the show is what Vince has always dreamed it would be. Just Vince standing out there while everyone watches him.

Okay, I’ve decided I agree with the idea someone is trying to sabotage Reigns at this point. No matter how the segment ends, the air is out of the balloon.

It is obvious that Roman and the Rock are related. They both have some major testicular fixation.

Vince would have had Conor McGregor lose on Saturday night and then have to kiss Dana White’s ass to get another shot at Aldo. If WWE didn’t own like 95% of their voting shares I’d say an investor revolt needs to happen.

And yet at the same time the commercial for NXT coming to Chicago has me all fired up. Funny world.

The running springboard kick by Del Rio was one of the ugliest spots I’ve seen in forever. Ryback had to stand for a good ten seconds watching Del Rio shuffle step his way towards him and slowly jump up the ropes. I wonder if Del Rio was trying to make Ryback look like an idiot just having to stand there forever like that.

Watching Ryback being twitchy on the ground, and then being so hyped that he just had to yell at the ref was pretty much the best part of this match.  Even the people involved were moving like they knew none of it matters. Winner: The Endless Looming Void of Nothingness Just Beyond Our Perception. And Del Rio/Rusev

Of all the events of WWE Week, I’m most hyped for Santa’s Little Helper

So by now you know the Rosebush stuff just isn’t happening. Not here. I can’t hardly handle watching this company unintentionally bury its talent. Actually doing it on purpose, well the amount of bourbon needed to handle that sort of thing would render me incapable of continuing this report in a way that wouldn’t turn into Delirious’s twitter account.

Welcome to the main card life Tyler. Instead of losing showcase matches on NXT Takeover cards, you’re the third wheel in a match designed to get over a terrible story that recycles the Mizdow dynamic.

I hope they guy in the front row is Faith No More guy but older and fatter.

The megaphone Miz has is what they use in the offices at Stamford to try to explain references from the last decade to Vince.

There is no one in the company who throws himself into shitty angles with the gusto and energy of Miz. Winner: Neville

So hyped for Santa’s Little Helper. Best looking movie coming out this weekend.

Fuck it, give me Miz taking voice lessons from Neville and Neville taking fashion tips from Miz and I’ll be entertained.

Keanu Reeves is the way into the city of whoa. Susanna Hoffs is the way into eternal flame. Will Ferrell doesn’t want to go back among the land of the lost. Christopher Lloyd is the angel in the outfield.

Something about JBL extolling the Blue Meanie just seems a bit wrong.

I love that the same people Bubba sent into near-riots trying to kill him are now the people he counts down to responding to his patter.

Every episode of Raw should include Michael Cole reminding the fans that it is not 1997. If it was the main event scene would be much more exciting. And Sid would be there for part of it.

Classic Tommy Dreamer. Even when he gets to give someone the bump through the table he still ends up taking the bump as well.

If that spot with Harper slamming the kendo stick down and Bubba catching the bounce was planned that was awesome. If it was unplanned it was fucking awesome.

Harper really deserves credit for keeping crazy brawls from getting too unhinged. He is an excellent glue guy.

Matches like this would overstay their welcome very quickly if done every week, but these guys in this town tonight was a pretty awesome thing to watch. Now let’s never do an ECW reunion thing again until the year when the whole damn company gets put in the WWE Hall of Fame. ***3/4 Winners: Wyatt Family

“These are three upstanding unicorns.” Everyone knows a unicorn can never lie.

Saying you don’t want to fight is a sure-fire way to get booed in Philly.

If you assume this show is actually a thing that happens, and not a planned series of events, one has to imagine that as soon as the New Day called the Usos out to the ring the Lucha Dragons ran to the gorilla position just waiting to be called down as well. If they hadn’t been, they would have walked back to the locker room with the sad music from the end of the old Incredible Hulk playing in the background.

This is the most tension filled offer of a handshake since the Megapowers formed.

I love this segment ending in the four faces getting booed. Once again, just so WWE. Winner: Always the New Day. Always.

Team Bad doing the ringside seats gimmick. On a show where so many matches have random people sitting with the announcers the idea of needing to buy ringside tickets just seems silly.

Quite the group we have out here:

The match was of course an afterthought. Some people say Raw murdered the Divas Revolution. Winners: Becky Lynch/Charlotte

I’ve watched this match for a good six minutes now and I have yet to think of a single thing to say about this. It’s not a bad match by any means, it’s just kind of there. They’re working hard but there is literally no reason to care about anything in this match until the plot points start to crash down.

Watching Vince get nervous when Reigns is on offense just drives home the point that the heels in charge are terrible at their jobs. Roman Reigns destroyed Vince McMahon’s son-in-law, so he gets a WWE World Heavyweight Title shot where he gets plenty of opportunities to beat Sheamus cleanly.

Reigns is busted wide open from that head butt. Gives an added desperation to his actions. I know it is barbaric and unsanitary, but damn it sometimes a match goes to a new level with blood.

“Sheamus is going for the death-blow”

Spend two hours of the show having Reigns get emasculated repeatedly, give him the title in the third hour. That’s our Vinnie.

I wonder if the three WWE Title changes in less than a month has Vince Russo all hot and bothered.

Was this the first World Title change on Raw since Miz cashed in Money in the Bank?

The match and the ending certainly made the crowd happy. I just wonder what you do from here. And once more the main event is Vince McMahon vs. his champ. ***1/2 Winner, and new WWE World Heavyweight Champion: Roman Reigns

Final Thoughts: Best wrestling quality show in recent memory. And maybe tonight was the start of some changes to the way the company does things. But after watching Reigns only be allowed to win after being humiliated by two McMahons, and what feels like a panic move to give Reigns the belt, I’m reminded of what was said earlier in the show.

“You people fall for it every freaking time.” – Vince McMahon