Every wrestling news site should be calling for Vince McMahon’s retirement. His exit is very unlikely to happen of his own volition. Even so, people who seriously talk or write about the pro wrestling business need to stop beating around the bush.

Many commentators putter about, discussing how frustrating being a viewer of WWE programming is, only occasionally hinting at the fact that WWE’s CEO drives it creatively, only tentatively questioning whether he’s out of touch. He’s demonstrated he’s irretrievably out of touch. He is the ultimate problem; nearly every complaint is the symptom of his creative disease. He needs to go away, at least from producing TV. That is the sole solution to WWE’s creative dysfunction, and the key to improving their business. That should be the narrative.

That narrative should be so overwhelming that nobody half-awake should be naive enough to tweet or comment about how “WWE needs better writers” or how “man, creative sucks”. Many fans still don’t get how influential and involved McMahon is in producing what’s seen on TV. Yes, there are a dozens of writers, but those writers’ work is perpetuated and approved of by one man who is lost far out at sea on an exorbitant yacht. His formula doesn’t work. His perceptions about who can be a star are utterly lost. His ideas of how women should be presented aren’t just insulting and unethical, but actually squander opportunities to do better business. Their TV is long overdue to be completely overhauled. Years of more tolerable mediocrity are now finally tipping over into a genuine decline. 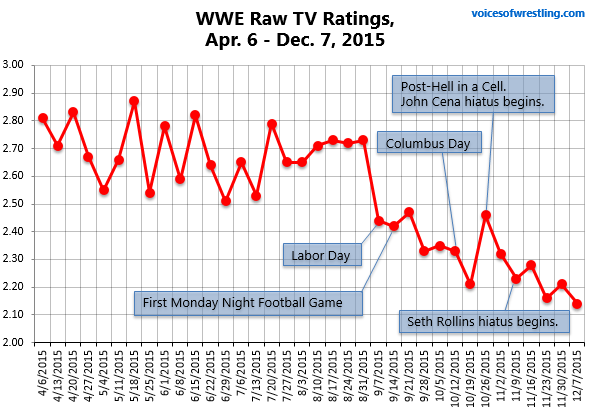 Despite weak ratings and a failure to create any genuine superstar in the last ten years, the company isn’t going out of business any time soon. WWE has no serious competition, not for fans or talent. Their most dangerous competition is themselves and their own hubris. They can afford to sign anyone they want. They currently have the most talented roster in the world, arguably of all-time. Yet this man cannot make it work. Rather than being excited for new talents to transition from NXT to the main roster, fans rightly dread it — perhaps the wrestlers do too.

“But it’s a publicly-traded company. Things are harder now.” That’s nonsense. The fact that their stock is publicly traded is an excuse for nothing; NYSE:WWE has been publicly traded since their peak in 1999, by the way. Every excellent Vince-free NXT show is another indictment that it’s not the system that’s inherently flawed, it’s the creative force. On Summerslam weekend, you could sense the good will the audience gave NXT on Saturday, which was absent the next night in the same building before many of the same fans.

Can you imagine how the more spry Dave Meltzer of the 80s would have reacted to this Vince McMahon, rather than Pragmatic Diplomat Dave, who we have today?

I listen to Meltzer and Bryan Alvarez spend every Tuesday morning, usually heavily criticizing the RAW that aired the night before, and rightly so. But what they don’t do is draw the conclusion — not clearly enough. I think everybody knows what the conclusion is, it’s just never adopted as one of Meltzer’s influential narratives.

Fighting Spirit Magazine is the only publication I know of that has specifically underscored that conclusion, as they did in an article by Justin Henry earlier this year.

Nobody within the business, who should be smart enough to know this, is willing to say it, because they’re either still on the payroll or don’t want to screw themselves out of a future nostalgia pay-day by burying the man who writes the checks.

While there are plenty of more rewarding alternatives to WWE, McMahon’s company is still the one that keeps the masses aware of pro wrestling. Even if you’ve given up on WWE today and you’re only a fan of other brands, your entry point was almost certainly WWE (or maybe if you’re older, one of the companies it has since absorbed). Even if you only care about Ring of Honor, TNA, Lucha Underground or independent wrestling, those promotions’ fan bases are made up almost entirely of people who were introduced to pro wrestling by Vince McMahon. For smaller companies to gain new fans, that original awareness of pro wrestling, which happens almost exclusively via WWE, needs to occur. Therefore, the decline of WWE trickles down to hurt everyone, your favorite indies included.

Will Paul Levesque, player of perhaps the longest game, save us?

@NINaylor people putting their faith in HHH have bad memories or no knowledge of wrestling history.

Can he really do any worse? There’s evidence every Wednesday night that Levesque is capable of producing a much better TV product than McMahon is. Granted, that’s with the benefit of only having to fill one weekly hour, not five. And Levesque knows that NXT isn’t for the masses, and maybe therefore he would serve the masses differently. Surely that’s true to some extent.

At least a Levesque-produced WWE would likely provide the end of Kevin Dunn, McMahon’s long-time ally in favoring visual aesthetics and misogyny. At least it would be a new creative direction different (if not free) from the stubbornness of Vince McMahon. And at least within NXT, Levesque has shown he’s willing to allow his mind to change with the times.

“But Vince will never retire. Why even suggest it?” Even if McMahon’s macho bravado is too great to retire and too great to give fans a better product, serious commentators owe it to their readers and listeners to clarify the central problem.

“I think my idea of retirement might be to one day work a 40-hour week. At the same time, I don’t want to be an impediment to progress. Some people when they get up there in age tend to be a little too conservative, not want to take as many chances. And I know people around me, not just my family, will let me know if I don’t know it myself, and hopefully I will.” – Vince McMahon, interview with The Hollywood Reporter (2004)

That time has surely passed. Does Vince ever think back on this sentiment he managed to utter eleven years ago? Does he ever wonder if he’s indeed become an impediment to progress? How does he apologize and exonerate himself of that burden? What excuses does he make? I think we heard many of them in his all too revealing interview with Steve Austin in December 2014.

“Steph and Paul will certainly have significant roles going forward. I think when I kick, the organization is going to change, and I think for the better, because there’s no one person who can do all that I can do because of my background. There’s no one individual who’s going to take my place.” – Vince McMahon, interview with Muscle & Fitness (March 2015)


If McMahon’s health were to suddenly fail or if he were to take a reduced role in his company, stockholders without a great understanding of the company might be uncertain. No single person but a number of executives would likely assume his duties, Levesque and Stephanie McMahon among them. By McMahon’s own admission, this would be for the better.

WWE will survive without Vince McMahon, and if the company is ever going to thrive again, it’s going to be without him.