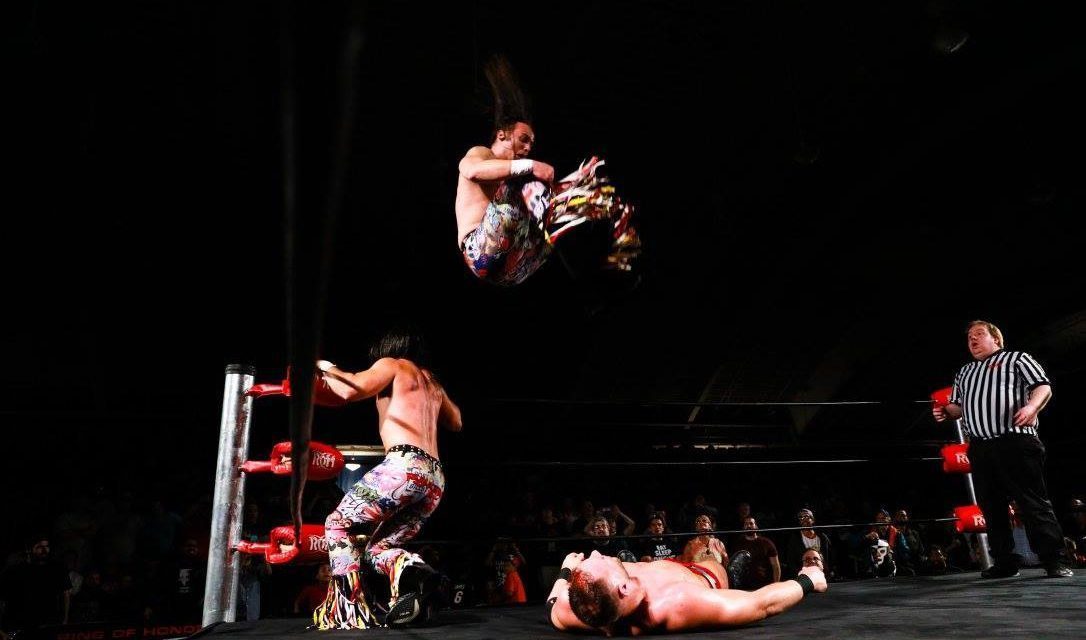 If you love sports entertainment, complete with gimmicky camera work, announcers plugging everything but the in-ring action, and storylines created to pop a 70 year old man, I suggest you STOP HERE. Please instead proceed to our fantastic WWE Raw review, because this product clearly isn’t something you’ll be interested in.

However, if you’re generally a fan of quality professional wrestling, this is the review for you, although, if you are experiencing an incurable case of insomnia, I recommend you watch Raw immediately (you’re welcome for saving you the doctor’s office co-pay).

This week Kevin Kelly and Nigel McGuinness are on commentary.

I love how ROH does the tale of the tape, prior to the match (as they did here). Love it! I remember as a child being enamored as Jesse ‘The Body’ Ventura ran down the larger than life tale of the tape for Hulk Hogan and Andre the Giant at WrestleMania 3 (as they fought in front of 120,000 people at the Superdome, brother). It’s a really great tool to add to the emotional investment of the match, and it may make you forget for just a moment that this is just entertainment, which of course is why WWE will never do it again.

This match has started off very quick, with O’Reilly and Fish working together very well with an assortment of double team moves.  Not long after, Young and Bruiser get their turn, working over O’Reilly with an array of double team moves that included a rolling senton, an impressive feat for someone Bruiser’s size. Although Young and Bruiser are a new team, they’ve quickly develop chemistry in the ring together.

As Silas has Fish reeling, Adam Cole (who faces O’Reilly at Final Battle in less than two weeks) comes to the ringside area to join Kelly and McGuinness on commentary. A battered O’Reilly makes the hot tag to Fish, who fires up. This leads Cole to say “Typical reDRagon, Bobby Fish doing all the work.”

With all four men are in the ring, Young nails Fish with a devastating bottom turnbuckle DDT, and Bruiser missed a frog splash off the top rope onto Fish, and rolled outside of the ring. One of The Boys climbed onto the apron, and was knocked off by O’Reilly, who executed a plancha onto both of them on the outside. The remaining one of The Boys in good health grabbed Fish, sprung his neck off the rope, and Young hit his misery finisher. As Young had Fish pinned, Referee Paul Turner was distracted and when he finally turned around Fish kicked out at two.

As the match ends, Young is knocked to the outside and reDRagon hits their Chasing the Dragon finishing move on Bruiser for the win. After the match, unhappy with the job of Paul Turner as referee, Young orders The Boys to attack Turner, and they do, leaving him lifeless on the mat with a DDT. Young tells The Boys to be proud of themselves and shakes their hands. Kelly tells us on commentary that The Boys never would have done this if they hadn’t fallen under the spell of Silas Young. As Young and The Boys leave the ring, Dalton Castle comes to the ring with mic in hand, and tells us that this has gone on just about long enough. Castle says “I believe you have something that belongs to me,” as a dazed Bruiser comes into the ring (sorry Bruiser, he wasn’t referring to you) and is promptly knocked silly by Castle introducing the microphone to his face. The Boys climb onto the apron and appear to be rejoining Castle, when they shake their head, and wave their hand, indicating a big “no thanks Jeff,” before rejoining Young. Castle looks absolutely devastated. Young says “These are my boys,” as Castle looks like a child who just found out his dog died.

Analysis: This was a good match. The Bruiser moves well for such a big guy, and him and Young seem like a natural fit with Young’s gimmick. reDRagon were impressive as always. If O’Reilly gains at least 15 to 20 pounds of mostly lean mass, I could see him doing quite well in WWE as a single competitor. The Dalton Castle bit at the end was rather good for what it was.

As we return from a commercial break, Chris Sabin is in the ring, telling us that he is not the man in the red mask. The man in the red mask suddenly appears and comes into the ring. He removes the mask and is revealed to be his former tag team partner, Alex Shelley, as the crowd goes wild. Sabin looks confused, and leaves the ring, as Kelly asks us on commentary if Shelley was the man behind the mask all along, and what his agenda may be.

Analysis:  It’s good to see Alex Shelley back in ROH, and aligned with Chris Sabin. Hopefully the Motor City Machine Guns return, and add to what would be inarguably one of the best tag team divisions in the world.

Walker is part of the Future of Honor, and wrestles in Puerto Rico. As he made his way to the ring, it was impossible not to notice an awkward situation down below. I’m not sure if he was freeballing or what the deal was, and I really don’t want to know, truth be told. However, he may want to consider wearing something a bit more restrictive and less revealing going forward (thanks in advance). He also scratched his genitals with the hard camera (no pun intended) directly on him (I thought his name was Samson Walker, not Al Bundy, anywho…). Bobby Fish, who faces Roderick Strong at Final Battle, joins Kelly and McGuinness on commentary.

Strong comes out in far more appropriate ring attire, and the match begins. Walker throws the much smaller Strong down, looks at the fans and sarcastically chants “Roddy,” and proceeds to grab his genitals on camera. Oops he did it again. Ugh. Perhaps he could keep his hands off of himself for the remainder of the match. The fans chant “sexual chocolate,” and I can’t decide if that’s racist, a compliment, or an indicator that they’re very aware that he keeps touching himself.

Strong landed some impressive strengths of feat on Walker, and picked up the win after a sick kick in what was a short but physical (and slightly disturbing) match.

After the match, Fish and Strong stare each other down, as the referees separate them.

Analysis: Samson must fix his genital arrangement or I’m hitting fast forward in the future.

The Young Bucks vs. The Briscoes

If you love Dave Meltzer’s unofficially adopted sons, you may not like what you’re about to read (heel turn incoming):

I’m not what you would call the biggest Young Bucks fan in the world. They do some things very well, and I feel they do some things not so well. The charisma, the facial expressions, and the athleticism, are all very good. They fall short on telling a story in the ring through means like selling, and they look like they couldn’t find a gym if they programmed it in a GPS. Frankly, it would be nice if they played the part a bit better and at least looked like they worked out a little since they’re only the size of an average young male fan who may attend the show. The main reason I’m not the biggest Young Bucks fan is because they repeatedly throw it in your face that it’s the land of make-believe (much like WWE), and although they play that to their audience very well, it hurts the overall business in my opinion. That opinion must’ve struck a chord with Matt Jackson, because he blocked me on Twitter earlier this year (after what I can safely assume was a vanity search).

The All Night Express join Kelly and McGuinness on commentary, as they’re scheduled to face off in a tag team triple threat match with both teams at Final Battle to determine the new number one contender to the ROH World Tag Team Champions.

A “This is awesome” chant breaks out before they begin fighting. Nick Jackson tells Mark Briscoe to suck it and does the DX crotch chop (paging Paul in Orlando). The Young Bucks nail superkicks on the Briscoes very early. A dueling “too sweet, man up” chant breaks out.

Mark Briscoe with redneck kung-fu on Matt Jackson until Nick intervenes with a…you guessed it, superkick to the face. Mark went for the running elbow dive off the apron ala Cactus Jack and ate a punch from Nick Jackson…just kidding, it was a superkick. Jay Briscoe landed a suicide dive through the ropes and all three crashed into the steel fan barrier. Back inside the ring, Nick Jackson hits a superkick, Jay Briscoe hits a superkick and a froggy bow, but Matt Jackson kicks out at two and a half. The Briscoes hit Matt Jackson with a Doomsday Device ala The Road Warriors, only Matt lands on his feet, no sells it, and superkicks Jay Briscoe. Matt is then joined by his brother Nick and they double superkick Mark Briscoe. The Young Bucks hit Mark Briscoe with the indytaker and the pin is broken up by Jay Briscoe after what was clearly just barely a three count (Paging Maffew of Botchamania). Kelly tells us it was two and McGuinness says it looked like three to him (spoiler: it was). The Young Bucks then land a few flippity doos on Mark Briscoe for the pin and win. The All Night Express say they’re going in the ring, and then we have all three teams standing off in the ring, as a fight breaks out to end the show.

Analysis: This was a typical Young Bucks match; athletic, fast paced, high-flying, an abundance of superkicks and high spots, and little selling, storytelling, or ring psychology. If you like that type of match, you’ll really enjoy this, but for me it was just ‘aight.

Final Thoughts: Overall this was a good show, and they did a nice job of continuing the build of some of the matches at Final Battle. A good one hour show leaves you wanting more each week (which is always a good thing), and three hours of Raw just leaves you wanting less. 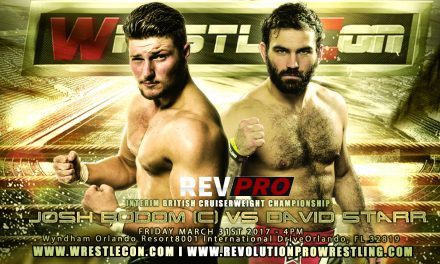