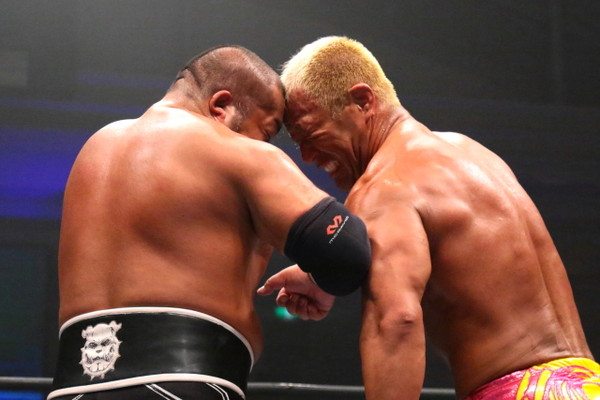 Sadly, this episode of NJPW on AXS, which features bouts from New Beginning in Sendai, is airing after allegations of domestic abuse were made public by Tomoaki Honma’s girlfriend, Kiyoko Ichiki. My opinions on the case are irrelevant, but this is the first time I’ve watched Honma in action since the allegations occurred and so hopefully that doesn’t hurt my enjoyment of one of the best matches of 2015.

Before we get to Ishii vs. Honma for the NEVER Openweight Championship, tag action takes place. It’s Kota Ibushi and pre-Los Ingobernables Tetsuya Naito squaring off against Kazushi Sakuraba and Toru Yano. Sakuraba typically does nothing for me. He has exceptions, like his Wrestle Kingdom 7 classic with Shinsuke Nakamura and his bout at Dominion 2015 with Katsuyori Shibata, but he typically does not entertain me. On NJPW on AXS, however, with Barnett analyzing his mundane grappling, I find him to be much more entertaining. The interactions between Sakuraba and Ibushi were a blast, especially with the vocal backings of Mauro Ranallo and Josh Barnett.

Hiroshi Tanahashi was out next, backed by Hirooki Goto and Katsuyori Shibata to take on the Bullet Club: Karl Anderson, Doc Gallows, and Tama Tonga. The positive of this was that the announcers made the grand point that the Japanese trio had lost their titles the prior show in Osaka. This was the beginning of their revenge. Other than that, this was a rather inconsequential match that added nothing to the broadcast.

My man, Tomohiro Ishii, is on the hot seat for the pre-match interviews this week. With him is a sweet white watch and some killer shades. Ishii cleans up rather nicely.

This was originally supposed to be Togi Makabe vs. Tomohiro Ishii, which makes me sick to my stomach considering the fact that these guys would wrestle three more times in 2015, but Makabe caught the flu, and therefore, had to pull out of his New Beginning matches. Makabe was the NEVER Openweight Champion, and since he could not defend, he was forced to vacate the gold.

Ishii was asked what his impressions of Tomoaki Honma were.

“Not much. My eyes are only on Makabe. There’s no point if I can’t get it [NEVER Openweight Championship] back from Makabe.”

While Ishii may be a man of few words, Ranallo and Barnett are not. What they bring to the table is something that Vince McMahon has never been able to do when he’s at the announcer’s table. It’s something that Michael Cole, Booker T, or any of the other WWE announcer clones have ever been able to do. Ranallo and Barnett aren’t perfect, but I would rather listen to speak raw emotion into the microphone than listen to manufactured emotion with perfectly placed sound bites and the perfect adjectives.

As a huge Tomoaki Honma, the past week has been a little uncomfortable for me. I’m not making a stance on the situation, but he’s a wrestler that I felt connected to and I hate thinking about the way that things could play out for him. For nearly 25 minutes, however, Ranallo and Barnett were able to take my mind off of his situation. Their excitement was felt. It brought me back to the cold February morning when this match initially took place. I remember how engaged I was in the match then, and now, with the fresh coat of paint Ranallo and Barnett brought to the match, that spark was back. This was an excellent performance from Ishii, Honma, and the duo of Ranallo & Barnett.

Ishii, once again a man of few words, closed out the show with a post-match interview.

“I have nothing much to say. As I’ve been saying, I wanna make the NEVER Championship really awesome. The IWGP Intercontinental Championship seems to be the main show, but I think I need to surpass that. I don’t know about Honma, but that’s how I fought the match.”

Final Thoughts: The first half of this show is very average. There’s nothing bad, but nothing I would even consider “good”. The second half, the portion that focused on Ishii vs. Honma, was incredible. Some of the best announcing that this program has offered. It doesn’t hurt that this is one of the best matches to air on AXS. A thumbs up for NJPW on AXS this week. 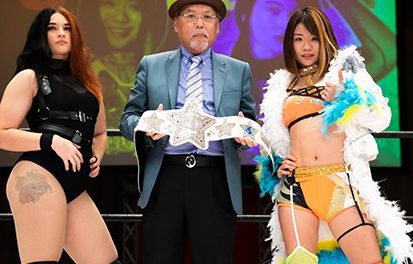