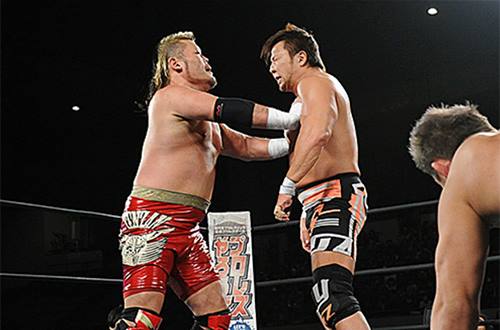 With even renowned cynic Brandon Howard warming to Nakanishi during this tour, these pre-final reviews are in danger of turning into a full on Nakanishi love-fest: but this really has been a magnificent chance for him to shine and enjoy the enthusiastic crowd reactions that he gets consistently, night after night. As he disrobes from his large tshirt that gives him the appearance of a recently awoken dad lumbering to the bathroom in the morning, a devoted portion of the crowd start a rousing “NA-KAN-SHI!” chant. If he’s pleased about this, he doesn’t show it, remaining a consummate professional.

As always in these matches, Nakanishi’s shortfalls become his strengths– his immobility, for example, becomes a cause for great comedy when he refuses to move for Daniels’ whip attempt, planting his feet and just remaining still.

This is an underwhelming encounter made infinitely better by the fact some super-engaged fans are sat right by a microphone; every Nagata chop met with thrilled cheers; every Kazarian kick, disappointed groans. It isn’t clear quite why the Addiction are obvious villains, but the crowd here in Kagawa are fully on board.

Besides this, this is a formulaic Nagata/Nakanishi match. After watching a few of these, I could call it in my sleep: the will-he/won’t-he Nakanishi double suplex spot followed by the pumped-up double boots, then Nagata ramming the Nagata Lock in as Nakanishi places Kazarian in a comfy looking Argentine Backbreaker. It’s familiar, but it works. What’s unexpected, though, is Daniels getting a sneaky leverage pin roll-up and stealing a win on Nagata. *1/2

Even though these tour matches are becoming repetitive, with more of a house show feel from night to night, something about Tanahashi stepping in the building with his glorious princely coat and shiny briefcase just makes things feel important. And Elgin is here, too, of course, in his silk dressing gown with the sleeves that are too long for his little teddy-bear arms.

Fale feels larger-than-life here, being that his expanse of back is facing us from the side of the apron that’s foreshortened towards the camera, and that the gym seems so small. He really looks like an impressive goliath, in appearance alone, and when he grips Tanahashi’s hair (a move we know Tana is weak to, from his run-ins with Yano earlier in the year) with his vice-like paws, it feels dangerous. Tana quickly turns the situation to his advantage, though, and manages to grab Tonga’s hair swiftly afterwards in retaliation. As fun as all this is, and while we acknowledge that these Tag League matches are a little different from the G1, it’s a bit rankling to see the best wrestler in the world doing lengthy spots around hair-pulling. Maybe I’m just bitter from seeing how all the best NXT women’s wrestlers end up acting on SmackDown.

Fale and Elgin face off, emphasising Elgins status as being the more compact gent quite starkly. They take turns running into each other, corner to corner then ropes to ropes, each run interspersed with grunts and growls. They then have a very dramatic test of strength , a microcosm of an entire wrestling match, with Elgin pushed to his knees at one point and having to power out. Both members of Unbreakable Ace have a hubristic shot at lifting Fale, which finally ends in Tanahashi lying crumpled and crushed in the middle of the ring.

After a long and not entirely graceful match, Fale and Tonga both spear Elgin for the win.

This lacks the energy of previous Unbreakable Ace showings, probably because Fale moves at about half a mile an hour at best, and the crowd had exhausted themselves from their Nakanishi chant in the previous match. Pace yourself, people. *3/4

This is a brawl from the get-go, with Ishii and Kojima exchanging thousands of elbows in lieu of any kind of feeling out process. This has the effect of creating a real sense of urgency in the early-fight, something that’s sorely missing in these tag matches where everyone feels neutral about one another. Neither team are going to their block final, so there’s not too much to wrestle for, but moving with conviction goes a long way to creating a compelling match regardless.

Unfortunately, Nakamura doesn’t particularly want to be here, and it shows. His style of wrestling in multi-man matches is laissez-faire at best, but here he’s outshone by literally everyone else. This match would have been improved if it was just Ishii exchanging chops and elbows with alternating members of TenCozy until he finally exhausted all his fighting spirit and collapsed.

Kojima is massively over with the baby pigs and near-mic members of this crowd, and a highlight of the match is when Kojima catches Nakamura into a massive suplex and then throws his elbow pad 5,000ft into the sky for Red Shoes to artfully catch it on the way down (very high ceilings, these rural gymnasiums). However, Nakamura thwarts Kojima with the Cross Armbreaker and slows things down, again.

Nakamura hits two Bom A Yes on Kojima for the win. ** 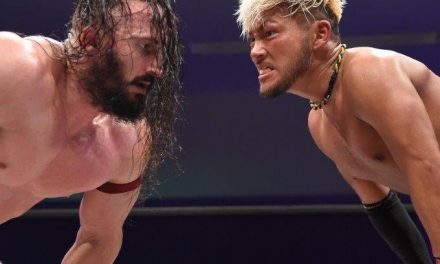