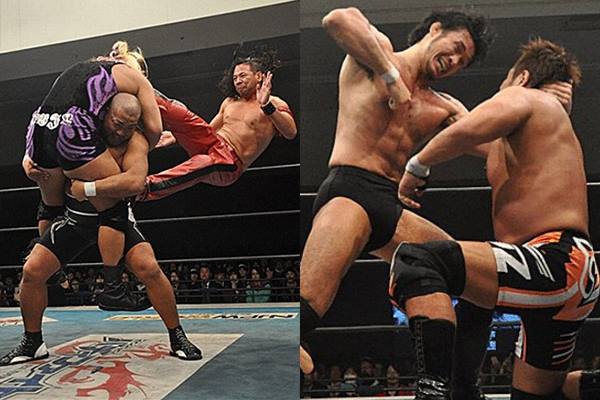 I managed to tear myself away from NJPWWorld’s new “mood angle” feature to watch this, but only after several attempts to physically remove my eyeballs from watching a match entirely from the timekeeper’s perspective. The thing rules. You can focus on one random crowd member and just watch how they react to everything, if you like. You can choose the camera that’s perpetually glued to Juice Robinson’s butt. Or a combination!

We were robbed of Michael Elgin vs. Jay White in singles from earlier this night: the only singles match on the entire tour, and an intriguing one, between the feisty New Zealand rookie and the more hirsute half of Unbreakable Ace. To see this match on the list of truncated matches not making NJPWWorld was a frustrating glimmer, a wistful look into an alternate reality full of fresh singles matches and no more tired ten-man matches involving Captain New Japan.

This is the first Nakanishi/Nagata match that has fortuitously fallen into my lap in the ostensibly random division of labour between me and my tag league tag partner Brandon Howard. Tag League really highlights the underrated relationships in NJPW; not the ones necessarily with a foundation of great technical skill or outstanding tag-team violence, but the ones where the partners have a deep foundation of respect and understanding for each other. When Nagata and Nakanishi crash their forearms into each other’s sides in a gesture of fond greeting, it’s hard not to feel a deep yearning for that sort of friendship. Where someone really gets you.

Already I’m missing my “mood camera”. I want to watch Sakuraba’s face on the apron the whole match; or Nakanishi’s. The men are unreadable, fascinating. I want to write short stories about Sakuraba’s sideways, amused glances at Yano. I want to sculpt Nagata’s likeness out of clay.

Nagata’s gait makes Yano look like a dastardly, dexterous cruiserweight in comparison, and when Yano dodges under his clothesline and hides in the ropes yelling “break” over and over to the mirth of the crowd, Nakanishi seems genuinely perplexed. Yano’s the youngest man in this match by nearly 10 years, at a spritely 37. This brief comedy segment makes way quickly for Saku showing his technical prowess on the mat with Nagata, in a sequence that gets some genuine applause when the two men finally separate. Against relatively inflexible opponents such as Nakanishi and Nagata, Sakuraba’s submission skills shine starkly: he has a response for every strike; a way to wriggle out of almost any situation.

Yano wrestles Nagata out into the crowd, revealing the arena to be larger than I’d imagined, and causing some scattered titters when he scoops the ringbell hammer into his tights. He distracts Red Shoes, and manages to utilise the hammer against Nagata, until overpowered by pure Anti-Ageing Justice strength. The story told here is one of traditional courage and honour vs devious underhand tactics, a story that’s in every fairy tale and anime and trading card game and decent limerick, but it’s done particularly well here, wordlessly.

Sakuraba has a brutal sleeper engaged on Nagata and things look bleak; until Nakanishi boldly drops a top-rope palm strike, which looks marvelously unconvincing but I still somehow want to clap for anyway. Sakuraba taps out to the Nagata Lock: beaten at his own game.

This match is super enjoyable and just satisfying in a feel-good way. All the men are comfortable with each other and know how to perform their roles perfectly, and the combination of solid pleasing wrestling moves with familiar comedy tropes makes for an unexpectedly good showing. Maybe I’m just a sucker for super old Japanese guys beating each other up? Probably.

They finish with another forearm-bash: this time, in victory. ***½

The crowd here in Fukuoka are an excellent one: whooping and clapping and making adoring high-pitched noises as soon as Shibata’s angry silhouette appears in the curtain. Rightly so, because Shibata is a fantastic prince of a wrestler, whose mouth-guard scowling is just as charismatic as any winning, dimpled smile from Tanahashi.

This is another good match with really solid work, where the wrestlers seem to feed off the energy of the particularly enthusiastic audience of baby pigs (judging from the voices alone). Some front row children are driven to hysterics by Kojima’s melodramatic overselling of Shibata’s sleeper; making several false-alarm attempts to power up; falling theatrically again; then finally collapsing into the ropes for the break. It’s hard not to get caught up in the excitement.

Kojima drops a ridiculously impressive lariat on Shibata for the win. ***

I noticed late in this match that a cardboard cut-out of the Kingdom were watching, spookily, from the distance

It’s hard to get “doesn’t bother to turn up for ages” over as a gimmick, although Naito has managed it quite impressively up til now. The ring announcer isn’t even frustrated any more. Just disappointed.

Despite Nakamura being the unofficial king of irritating in-ring stylish shenanigans, he shows early he’s not going to tolerate any nonsense from Naito: he replies to Naito’s annoying bat to his hair with a hard elbow in the collar, making eye-contact, sending a message. As in a lot of these Ingobernable matches: the tension is in what doesn’t happen. Ishii faces off with EVIL, looking for a confrontation, and gets increasingly growly and distressed when EVIL ambles around not looking at him. Taking advantage of Ishii’s vulnerability, Naito sneak-attacks him and they move the action out of the ring. Because Nakamura has the fortitude of a paper bag in the breeze in tag-matches, he’s quickly taken out so that Naito can focus his offence on Ishii.

Ishii might be the second-least impressed man with Naito in NJPW, following hotly on Shibata’s tails. He’s not spooked. He’s not worried. He’s just annoyed.

Finally, Nakamura gets to tumble with EVIL, with cherishing yelps and claps from the crowd to cheer him on. EVIL does something that I’ve only ever seen Goto do with similar skill, which is to respond to aggressors running away into the ropes by immediately following them, running a pace behind, bouncing into the ropes a split second after they do. This completely throws off the momentum of whatever move Nakamura wanted to execute upon his return, because as he turns around to elbow EVIL, EVIL is right there; suddenly he doesn’t know how to use his arms any more, and EVIL gets the advantage.

This match has so much to enjoy in the chemistry between the four men that until BUSHI isolated Nakamura for some stomps late in the game, I almost forgot that most of the preceding 20 minutes of action are irrelevant in Ingobernables matches. Some nearfalls make me forget again, and EVIL kicking out nearly vertically on to his head at one in the last minute of the match made a woman in the audience shriek so excitedly that I felt very grateful I wasn’t there, being the one having my overreactions immortalised.

Although a utilitarian Boma Ye helped Ishii get the finish he wanted, this match wasn’t really about Nakamura at all, instead being a showcase for how Ishii continues to be low-key one of the most fun wrestlers to watch in NJPW even with such stiff competition. Ishii gets the pin on EVIL with the brainbuster. ***1/4

Final Thoughts: There’s a really fun atmosphere to these three matches. A fun old-timers match, a twist ending, and a hotly anticipated main event.  One of the better static-cam Tag League nights. 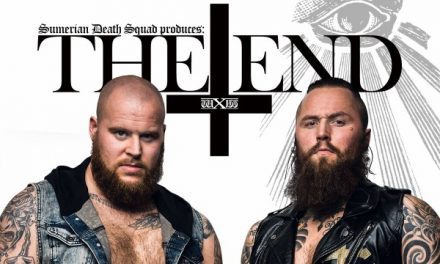