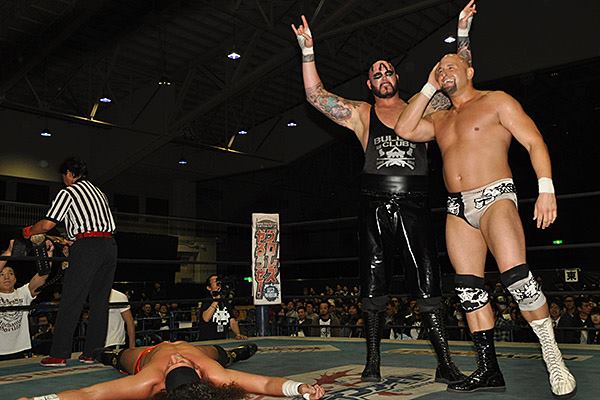 Like the event the day before, NJPWWorld has released only the tournament matches for this show. The show did not air live; it appeared on the site the next day, and again, they’ve only uploaded the three tournament matches. Not to fear, though, because if Night 2 was any indication, we’re not missing much by omitting a slew of probably inconsequential several-man tags.

Fale is a staggering, statuesque image. His bodyguard-like seriousness is contrasted by Tonga, who walks out creepily in front of his partner as they move closer to the foreground of the static camera frame. Tonga’s mannerisms, combined with his unique look, are remarkable and set him apart, in New Japan or any promotion.

First match in and it seems like this show has a similar deadly atmosphere to that of the early matches on Night 3. I shy away from the “Japanese crowds are respectful and quiet” stereotype, but the crowds so far at these lesser-known venues have been hushed. The New Japan website says this show drew 1,820 fans, but the venue sounds more like a U.S. indie show at a gymnasium before a crowd of 300 (only without the nonstop compulsive catcalling, our sordid American custom).

Kazarian lures Tonga into some comedy early, which seems uncharacteristic for the underrated Bullet Club member. They each hold one another’s legs, each standing on one foot, and agree to a stalemate. Comedy is Tonga’s momentary demise as he’s quickly cut-off as a result. To their credit, though, this spot is the only thing that gets much of a reaction for some time.

The Addiction team tries to double team Fale, but logically, it proves unsuccessful. They only get control of the match once they isolate Tonga. Kazarian backflips off of Daniels back suplex onto Tonga, followed by an Asai Moonsault by Daniels, which was nicely executed and earns a pop from the fans in Ishikawa.

Fale is really protected as a big man who never leaves his feet here. He’s effective, changing the dynamic of the match when he clotheslines Daniels as he (Fale) stands on the apron. Yanking Daniels out of the ring, Fale tosses Daniels over the guardrail, perhaps in a veiled attempt to wake up this crowd.

Daniels makes it back to the ring, but doesn’t make a tag. The Bullet Club team keep the heat on him, which ends as Daniels actually does the ultra-traditional three elbows to the gut while Tonga holds him in a chinlock. This reveals unambiguously that the Addiction are leaning babyface tonight after they aligned themselves as heels the previous three nights; The Bullet Club’s heelishness apparently and understandably takes precedence.

Like certain audiences, certain wrestlers feel an absolute compulsion to shout out phrases, however inane, particularly at moments of silent opportunity. The hot tag to Kazarian is marked by a slingshot DDT and his verbal announcement: “I am the coolest person in the world!”

As often the case in pro wrestling, tag team rules are less strictly enforced as time goes on. Fale and Tonga hit a Samoan Drop and flipping neckbreaker combination on Daniels for the match’s only believable nearfall as Kazarian makes the save.

The downfall of so many big men, Fale’s incapacitated with a double clothesline over the ropes to the floor. This allows the Addiction to hit Celebrity Rehab on Tonga, and pick up their first win of the tournament, putting an end to a match that was medium on effort and low on crowd response. **

Taven out wrestles Anderson early, but that’s not really the point here. The story of this match, and you knew it would be, is of Karl Anderson’s intoxicating infatuation with the Kingdom’s Maria Kanellis.

Heel and face alignments aren’t as cut in dry in Japan, but opposed by the overtly villainous Bullet Club, The Kingdom are defacto faces, which seems to make sense given the (perhaps perverse) popularity of Maria. Is it my internet eyes, though, or are The Kingdom ill-fitted for this role? There isn’t much sympathetic about this team, who are accustomed to being irretrievable heels in Ring of Honor.

When the match spills outside, Gallows disassembles a square of blue guardrail and hurls it at Bennett. This allows Anderson to a grab a chair, not to smash Taven with it, but to sit in the ring and entice Maria, who declines his invitation.

At best, when well-timed and not repetitive, these Maria spots have their moments; at worst they’re disturbing and uncomfortable. This was neither. Granted, I’m sitting here viewing a house show on a static camera, seeing a match none but the live crowd and only the absolute hardest of hardcore fans will ever watch, but this feels like the same, at best, mildly funny joke being told for the umpteenth time.

Taven gets a hot tag from Bennett, hitting a lot of fast offense on Anderson. Anderson bumps and feeds to no response, but Taven saves it by capping his comeback with a kip-up that gets him applause where a less savvy worker might have just moved onto the next spot.

As the match looks like it’s getting closer to a finish, Anderson hits the ropes as if he’s going to do a running dive. Maria slides in to stop him. She obliges Anderson in a dance, and as he dips her, he takes a superkick from her husband, Bennett. The clever spot got over. It reminds us, though, that the few women who exist in New Japan are valued (explicitly) for their sex appeal.

Capitalizing on that, Taven gets crossbody off the top on Gallows for a nearfall. This advantage doesn’t last. Gallows cuts off Taven with a superkick, and he and Anderson finish Taven with the Magic Killer. The IWGP tag champions win their first match of the league in a match that got the crowd a bit more into it than the previous match, and had a better finishing stretch. It feels like a squander that the current crop of New Japan gaijins are very competent, most of them athletic, some very, but there’s seldom any real fire or drama to their matches, especially when they’re booked against each other. **1/4

Okada and YOSHI-HASHI come into this match looking to pick-up their first win. Meanwhile, Nagata and Nakanishi are probably already  overindulging in getting theirs on their first night out, on Night Two.

Well above anyone we’ve seen yet in these three matches, Okada is perceived as a superstar. For his entrance with YOSHI-HASHI, fans pile in at the guardrail near the entrance-way, cell phones lit and raised. YOSHI-HASHI passes by without much notice as fans test the guardrails, jamming forward. Jay White and Sho Tanaka have to flank Okada to the ring, batting down desiring arms.

If you think about it, for Manabu Nakanishi, a man in the twilight of his career, who is now relegated almost exclusively to undercard multi-man tags: this match (along with his upcoming meeting with Hiroshi Tanahashi and Michael Elgin on November 29) is arguably the most high-profile match he’s had all year.

With Okada in the ring, the fans are considerably more engaged now. The match starts off with an athletic pair of stand-offs between Nagata and Okada, featuring Nagata’s classic limbo-style evasion of the Rainmaker.

Naturally, Nakanishi assumes his post at mid-ring as he and YOSHI-HASHI pair off next. Nakanishi firmly stands his ground, no-selling kicks to the gut, working a Greco-Roman knuckle lock and thwarting shoulder tackles. YOSHI-HASHI tries to Irish whip the immobile one like a fool; they go nowhere. Having learned, YOSHI-HASHI does what he knows will work: he gets Nakanishi to chase him. They run around the ring at starkly different speeds. YOSHI-HASHI slides in ahead and attacks his opponent as he starts the insurmountable burden of climbing through the ropes.

This sets up for a tag to Nagata who comes in with fire and unhesitating running kicks to the face. When Nagata gets cut-off, he brings in Nakanishi for a much weightier onslaught of running splashes on Okada.

When Nakanishi puts Okada in the Argentine Backbreaker, YOSHI-HASHI comes in to break it up. Selling kicks to the midsection, though, while holding the IWGP Heavyweight Champion across your back requires a certain amount of agility. Nakanishi proudly no-sells the kicks, and in exchange, merely dumps Okada’s body across YOSHI-HASHI.

That, however, was Nakanishi’s limit. A failed German suplex attempt results is a superkick from YOSHI-HASHI, followed by a flying elbow drop from Okada that looks fantastic from the hard cam. Okada mercifully blasts him with the Rainmaker. Before Okada can even go for the cover, fans sprint out of their seats to the aisleway rails again, knowing Nakanishi has absolutely no hope of kicking out.

This match was slightly longer than the prior two, but actually felt shorter. This was an honorable performance by Nakanishi, as well, whose weaknesses were turned into fun, logical moments. **3/4

Final Thoughts: This was an easier watch thanks to not having a choice about skipping over the low-profile undercard. However, I’m still waiting for something to recommend from my portion of this beat.