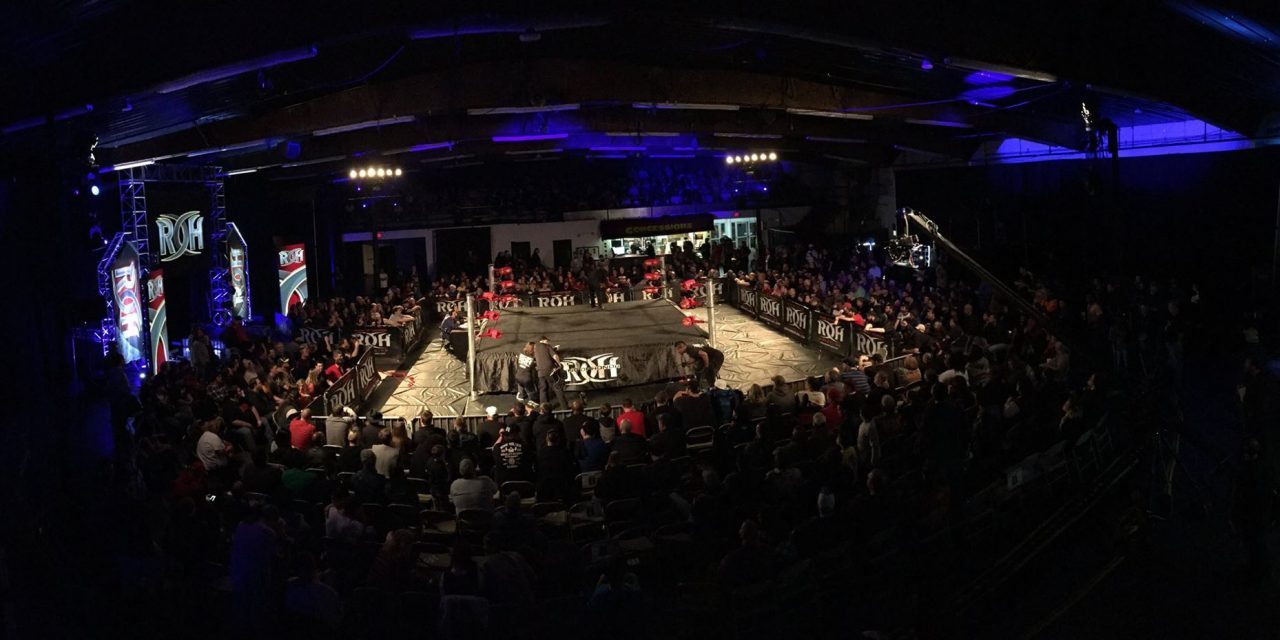 Building on a strong show last week, the momentum leading into Final Battle continued.  This week we saw a focus on a blossoming new rivalry between Moose and Michael Elgin, the evolution in the BJ Whitmer and Steve Corino storyline, and a rematch between ROH World Heavyweight and Television Champion Jay Lethal versus Roderick Strong, for the ROH World Television Championship.

Much like Michael Elgin squashing Kevin Lee Davidson in near record time last week, Moose followed suit this week, only this time, I used my trusty stopwatch to officially time it.

As the match began, Moose moved towards Carter, suddenly hit him with the spear, and pinned him in seven seconds.

After the match, Hathaway grabbed the microphone and called out ROH World Heavyweight and Television Champion Jay Lethal. Hathaway began repeating a similar line to Michael Elgin last week about Moose eventually getting his title shot, and then reminded us that this actually sounded just like what Michael Elgin said last week. Hathaway called out “Big Mike” Michael Elgin, not only saying that Moose is bigger, stronger, and a better wrestler, but that he also beat his opponent this week faster than Elgin beat his opponent last week (which is debatable but since I debuted my stopwatch feature this week I can’t refute it). Hathaway suggested that all adds up to Elgin not being able to beat Moose, and he should get to the back of the line for the ROH World Heavyweight Championship.

Michael Elgin came out to the ring, and admitted that Moose did win his match a little quicker than he did last week, but there was a 200 pound weight difference (okay, maybe it was really more like 150 pounds, but I digress) and when he’s ready for real competition “Big Mike” is standing in front of him right now, and he doesn’t back down. “Big Mike” asks Moose what he thinks about that. Moose grabs the microphone from Elgin and says they can do this right now.

As “Big Mike” pulls down the shoulder straps on his singlet to fight, out comes The House of Truth (Truth Martini, Donovan Dijak, J. Diesel, and Taeler Hendrix) to interrupt. Martini says we’re not going to sit back and let you use Jay Lethal’s name in vain. Martini calls Moose a “big goof,” and tells Big Mike, “I kinda like you…psych,” as Dijak laughed and pumped his fist in approval. “Big Mike” tells Truth that the only checking going on tonight is when he takes his side piece and checks into a motel later to show her a good time (an hourly-rate motel one would assume, if “Big Mike” is indeed fiscally responsible). Martini yells that no one talks to Taeler that way, a brawl ensues, and a referee at ringside rings the bell indicating an impromptu tag team match between The House of Truth, and “Big Mike” and Moose.

I like where this is going. Last week I wondered what direction Michael Elgin would go after learning he didn’t re-sign with ROH, and now that direction is evident. Continuing to book Moose strongly is important, and overall they’re doing a good job of that. It was nice to hear Moose speak, and he kept it short and to the point as he should have. Characters like him don’t need lengthy promos, and frankly that would fall flat with the fans. The idea of squash matches is highly underrated as it comes to building talent as a legitimate threat. The idea of ROH doing an occasional squash match is something that WWE could learn from.

The entire match concept was built around Moose and Elgin trying to one-up each other, which plays into the storyline perfectly. Moose landed a hard suplex on Dijak, and then gave Elgin a hard tag. Elgin responded with a delayed suplex which saw him hold Dijak (who is a large man) in air for 30 seconds as the crowd counted, then do a full squat before crashing to the mat. Elgin got in Moose’s face and yelled “That’s how you do a suplex.”  Moose then shoved Elgin, who shoved him back. This gave Dijak and Diesel an opportunity to recover and attack. At one point while Moose was in a seated position, Diesel struck him with a kick to the head, only he mistimed the leg slap, and you heard a loud noise before he made contact with Moose’s head, and unfortunately, it was clearly seen by the camera angle (…awkward). “Big Mike” had some nice spots, including a cannonball senton, and delayed german suplex, but perhaps none better than hitting Diesel with a spinning backhand bitchslap. As the match came to a close, Elgin had Diesel in the powerbomb position, and Moose tagged himself in unbeknownst to Elgin. As Elgin landed a bucklebomb, Moose charged towards Diesel and hit him with a spear for the three count as Elgin looked on confused and annoyed. After the match, Elgin and Moose square off nose to nose, and Elgin raises his hands, and Hathaway raises Moose‘s hand.

Building on the earlier confrontation that led to this impromptu match, we saw the exact type of one-upmanship we should expect to continue to build this new, exciting feud. The eventual match between these two should be physical and entertaining.

Adam Cole is backstage and welcomes us to another edition of Storytime with Adam Cole, bay bay. Cole talks about the Kingdom defeating the Addiction last week, and their match at Final Battle with War Machine. Cole says next week on ROH TV he faces the party peacock himself, Dalton Castle. He pulls out a Dalton Castle t-shirt, wipes his nose with it, and says clearly I am taking this match seriously and see him as a huge threat, as he laughs. Cole says ever since Castle lost his boys, he’s lost a step, and he doesn’t stand a chance going one-on-one with the greatest professional wrestler on the planet.

A quick but effective way to advertise and set-up a match for next week on ROH television. It’s certainly better than randomly pairing them together with no backstory (COUGHwweCOUGH).

They show a nice video package of Strong talking about his feud with Jay Lethal, and highlights of their last match, which went to a time limit draw at Death Before Dishonor. Strong says at Death Before Dishonor, he could see Lethal was scared and starting to believe that he is the greatest wrestler in the world, but after the match, Strong says he couldn’t say that with how it ended, and that bugs him. Strong says this time it’s not about the ROH World Title, and it’s not really about the World Television title. This time it’s about pride, and respect, which is why they do this. He says I’m not only taking your ROH World Television Title, I’m taking your pride.

This video package did a nice job of building anticipation and a big match feel for the main event, which allows us to emotionally invest as fans.

Whitmer has the microphone and says he is rarely at a loss for words, but after the garbage he watched last week, he doesn’t even know where to start. Whitmer says Steve Corino claimed to have a neck injury and his career might be over, but he saw through those words. He saw a very scared and frightened man, who continued to lie and then quit to get himself out of a difficult situation. Whitmer says it didn’t surprise him that the fans (who he referred to as “pathetic idiots”) bought what Steve said, but it did surprise him that Nigel McGuinness bought it, until it hit him. He says it was only a few years ago that Nigel was on top of the world, things didn’t go his way, and he found himself in a difficult situation, and he lied and quit to get himself out of it (a worked shoot comment on Nigel leaving ROH while allegedly injured, and going to TNA and briefly WWE, where it is speculated he failed a physical and lost his deal). Nigel took off his headset and confronted Whitmer in the ring, as Whitmer asks him if he’s going to be a man for once in his life. Nigel says he is sick of Whitmer interrupting his shows and hearing him whine. Nigel says the bottom line is that Steve Corino cannot be at Final Battle, and if he can’t be at Final Battle, neither can Whitmer, or Adam Paige. Nigel congratulates them on losing a spot on the biggest show of the year, and orders them to get out of the ring.

Steve Corino’s real life neck injury forced them to quickly change this storyline. Rather than attempt to force The Decade into something meaningless, they decided to sit them out, as punishment. I enjoyed the way they brought real life into the promo, and I don’t mind them being banned from Final Battle under the circumstances.

The House of Truth was banned from ringside for this match. Kevin Kelly did a nice job of putting Jay Lethal over on commentary, reminding us that he’s been ROH World Television Champion for nearly 18 months, and along the way he defeated Jay Briscoe, who previously hadn’t been pinned or submitted in close to 800 days.

During formal in-ring introductions, Jay Lethal posed and swung the ROH World Television Championship belt back and forth in front of Strong, taunting him.

Strong took control early, and Lethal tried to hightail it out of the building. Strong stopped him, and they battled outside of the ring, as Kevin Kelly informed us that in ROH they had a 20 count to get back into the ring (a nice touch for newer ROH fans).

Strong blocked a Lethal Injection as the crowd chanted “Let’s go Lethal, Let’s go Roddy.”  Lethal hit a diamond cutter from the top rope for a two and a half count. Strong then went on a tear, with one hard-hitting move after move on Lethal , until he locked in his Strong Style submission and Lethal tapped out.

Lethal looked on in shock as Strong celebrated in the ring as the new ROH World Television Champion.

The match itself was 15 minutes, which was not nearly as long as their time limit draw at Death Before Dishonor. Granted, you had to know they wouldn’t have that much time on an hour-long TV show with other storylines to push. The match itself was very good, though I would’ve preferred to see more selling (particularly from Strong) towards the end. They made the right move by putting the World Television Championship on someone else, as Lethal shifts his focus on AJ Styles at Final Battle for the World Heavyweight Championship.

Final Thoughts: Overall this was a great show, with a continued solid build for Final Battle. The dynamic between Moose and Michael Elgin is intriguing, and it was nice to see a championship title defended, with a big match feel to it, on free TV. 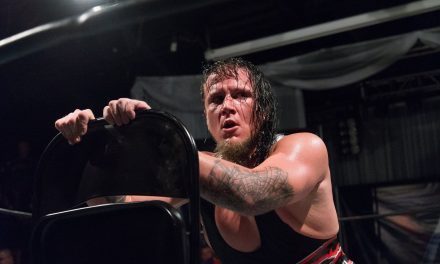