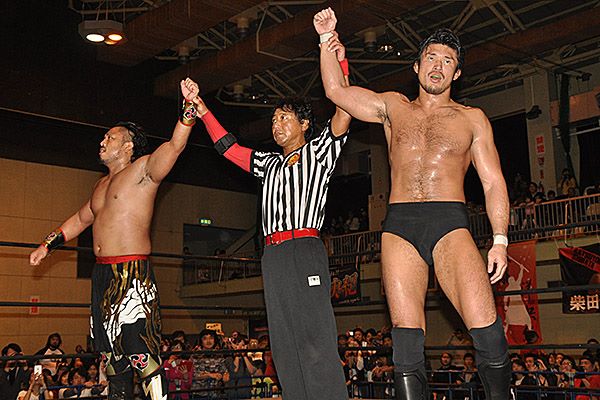 The Tag League shows (bar the November 27 and December 6 shows, and the December 9 final) are all on Next Day Delivery on NJPWWorld from here on out, so this is a truncated recording with just the tournament matches making video. While this does mean that I’m cheated out of seeing the burgeoning undercard intrigue between (for example) Captain New Japan and Juice Robinson, it makes the show a lot easier to digest.

Naito’s out-of-date babyface theme is far too energetic to accompany ambling, robed, scythe-equipped “King Of Darkness” EVIL to the ring. He stands on stained canvas under the harsh lights of the Kuwana Gymnasium waiting for his Ingobernable pals for what feels like an age: looking like a Halloween reveller who’s popped to the local convenience store to pick up more drinks, and is suddenly very self-conscious of their party attire.

In contrast, the Kingdom emerge sporting neon pink, lime, and blue, looking like a pack of highlighter pens.

This is a match characterised chiefly by stalling; from bell-to-bell there is a lot of dead air. Perhaps it’s the static cam making that time feel empty, rather than full with electric tension, but the Kingdom don’t quite know how to deal with Naito purposefully removing his cufflinks stage-by-stage, and fail to get the crowd behind them. I was desperate for Shibata to storm out and dropkick Naito’s face off, then drag him to the floor to grapple frantically (still fully clothed) just to speed the beginning of this match up.

After seeing Naito’s devious evasiveness and defence against the most skilled of opponents throughout the G1, it feels unconvincing that he would get caught into some of Bennett and Taven’s lacklustre tag moves here: flopping into place without much resistance for Taven’s springboard elbow drop, for example.

EVIL gets tagged in and the pace doesn’t improve. He tries to maul Taven with some biting/kissing/choking action on the mat that’s hard to differentiate from the hard cam angle, and Red Shoes is quick to intervene and comically mime the undesirable behaviour, as if EVIL didn’t know what he’d done. After this it just feels like the Ingobernables have no fight in them for a long time, batting back the Kingdom with the force and enthusiasm of a paper bag blowing in the wind.

Eventually EVIL pulls the ref in for a heated hug, allowing BUSHI to spring into the ring and spray poison mist in Bennett’s eyes. Naito hits Destino for the win.

I would have liked to have seen BUSHI and Maria interact here: but on reflection, it’s probably better they didn’t, being that the only interaction I could imagine them having is Maria gyrating and then BUSHI spitting in her face. *3/4

Unbreakable Ace gave a show-stopping performance on the first night of Tag League, and the unlikely partnership of Elgin and Tanahashi is rapidly winning hearts and minds. This is a challenging first tournament match for The Addiction: facing both handsome suave, briefcase-toting Tanahashi, and soft-spoken, lumbering, bearded teddybear-man Elgin.

This matchup is a far cry from the seething resentment and atmosphere of Okada and Tana in the ring together on Night One : but Tanahashi is skilled at getting the crowd interested early, so there’s instantly more drama than the previous match on this card. Daniels throws a pouty strop in the face of Elgin’s roaring unyielding stance, and makes the younger man look even more fearsome when Daniels bumps flat after only one clothesline. The obligatory suspended vertical spot hasn’t lost its appeal with the gasping young people of Kuwana, Mie, but no one really knows how to deal with Kazarian pulling out a sarcastic air guitar to rile up Tanahashi.

Elgin and Tana are a delight, and the Addiction hold their own too, but something’s a little off about the dynamic between the two teams; the periods of control don’t flow; the reversals don’t feel natural; and it’s hard to believe there’s any sort of bad blood between the two teams, who have little history in their current incarnations. Still, Elgin gets in his big impressive strong-man spots, and Tanahashi gets the win with the High Fly Flow on to Kazarian. **1/2

This was last year’s Tag League final: and a Wrestle Kingdom match, too. It was Guns ‘n’ Gallows who cruelly retrieved the IWGP Heavyweight Tag Titles from childhood friends Meiyu Tag at only their first defence after winning them at the Tokyo Dome. Shibata only had two dreams in his high school days; winning the Tag Titles with Goto one of them: but it’s hard not to feel like their triumphant, redemptive reign was scuppered by the Bullet Club sweep at Osaka in February.

Shibata has an unrivalled intensity that shines through even on this hard cam, detached angle. Nobody closes space like Shibata, stomping through the ring to stare down the much taller Gallows immediately, with an aura of threatening energy surrounding him. When the bell goes, he drops a Figure Four on the infamously inflexible Gallows here, which looks agonising.

The mood gets a tad lighter when Anderson gets in the ring, but Goto’s not playing either. He traps Anderson in a stifling headlock, and refuses to break it even when thrown to rebound off the ropes, merely taking Anderson’s head with him. Goto stands stalwart to Anderson’s slaps and chops, only his hair blown back by the force of Anderson’s hand betraying that he’s affected at all.

Bullet Club, lacking the support of their comrades at ringside for this match, fall back into their old tricks of taking the action as far out of the ring as possible: frogmarching Goto to the back row of the seated fans; throwing him against the wall. Anderson flings a chair into the ring from an indeterminable distance due to the camera angle, but it sure seems like a few thousand feet at least. Cynically (or, maybe even in kayfabe, too?), these feel like tactics employed by Guns ‘n’ Gallows to disguise how they could never begin to outwrestle Goto and Shibata. Instead, they distract, with foreign objects and crowd-brawling.

When decorum returns, Shibata throws devastating elbows at both opponents, but apron distraction causes him to get caught in a deep spinebuster by Anderson– then take a Magic Killer which leads to a breathless, heart-stopping nearfall — but he survives.

Shortly afterward, Goto regains composure enough to deflect Anderson’s attacks from the outside while Shibata holds a typically impressive sleeper on to a seated Gallows. A PK follows this up, rapidly, and Shibata gets the pin.

This wasn’t quite the touching moment of vindication that Meiyu Tag had last January in the Dome, but it was heartwarming nonetheless. Shibata cuts a terse promo to the adoring, cheering crowd, which Goto reiterates in even more heartfelt tones, then the men sit cross-legged together, proprietarily, in their ring. ***1/4

Final Thoughts: Nothing here had the big fight feel that I was secretly hoping for at least from the main event: but the tournament rolls on with some fresh matchups and some old favourites. Meiyu Tag continue to be a highlight. 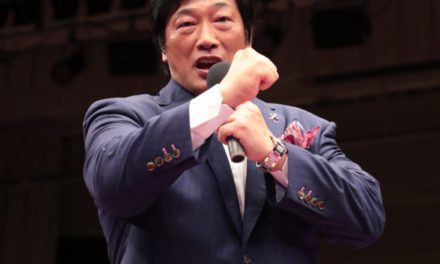 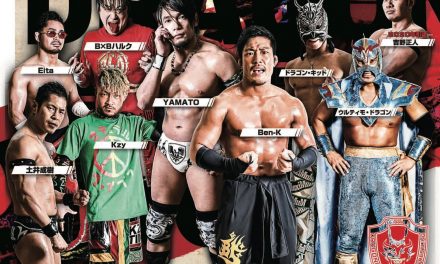