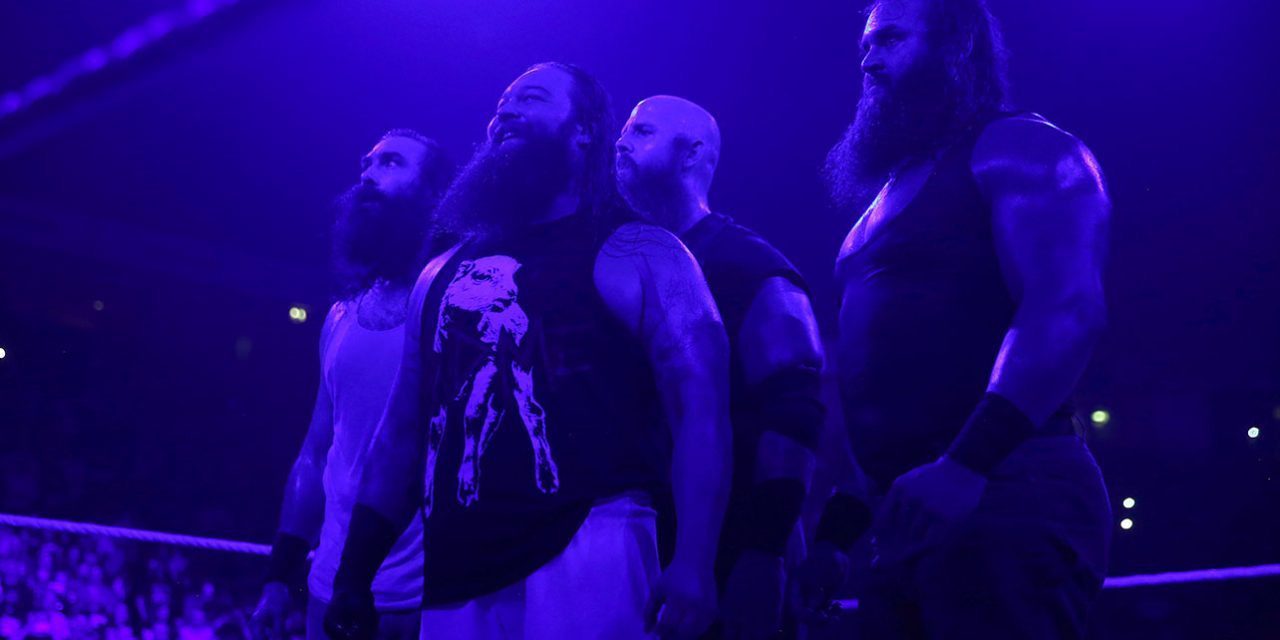 Plans were thrown out of the window for this week’s WWE RAW and WWE SmackDown on the dear shores of Blighty when our champ’s knee decided to disintegrate mid-grueling house show main event vs Kane. Hence a hurried 16-man tournament for the title has been thrust upon us, full of eclectic and improbable characters, and kicking off on RAW. Last week, while musing upon reduced (seemingly dwindling daily) rosters and the abyss of creativity on SmackDown I highlighted tournaments with consequences as being a cool way to get more eyes on Thursdays, so this Seth Rollins Memorial WWEWHC Tournament getting matches on SmackDown is a bittersweet sort of victory.

“The Wyatts show up, and blood runs cold!”

To emphasize how much it feels like the rule book’s been torn up this week, Luke Harper is the first to speak in-ring: going head-to-head with the deafening chants of exuberant Mancunians who had been told to expect the Undertaker. Each of the Wyatt Family get an opportunity to mutter creepy nonsense in a big scary deep voice, no new Erick Rowan backstory is revealed, and Bray mysteriously asserts that Kane and the Undertaker will never be the same because he has “taken pieces from them”. “Which pieces?” someone quick on the mark and ready for panto season ought to have shouted that from the front row.

Wyatt offers a deal to the Brothers of Destruction; which I find odd, being that if he has them kidnapped and/or soul-imprisoned, surely he could just ask them privately, or, just sort of insist on them accepting the challenge in exchange for their “pieces” back or whatever? It’s ambiguous whether they had escaped the bayou shack they were being kept in, in order to appear at RAW; and what happened after that. Regardless, the challenge is: a two-on-two tag team match at Survivor Series.

So we have a week’s worth of build left til Survivor Series and the previously presumed Traditional Elimination Tag Match is off the cards, with no clear replacement. If the plan is now to forego the Survivor Series match at the next special entirely, then why have they been having elimination tags for the last couple of weeks of WWE TV? Is everything just random coincidence? It feels like sometimes it’s hard to trace a straight thread of creative direction just between one week to another; let alone in large, overarching plotlines.

Bray falls to the floor in atmospheric darkness, imploring the Undertaker and Kane to follow the buzzards, another confusing instruction in a general mess of a story (and promo).

Anyway, now for something completely different:

I always forget how these heavily edited British shows have such a weird vibe to them: to the extent that even ones I was there live for seem unfamiliar on rewatch. Everything feels a bit disjointed, the promos don’t flow properly, people enter and reappear in strange ways. From the live reports, it seems like only half of what happened actually made tape, and the rest was just fan-pleasing freebies to justify getting English fans to trudge out in the drizzle and dark to go see half of an already scanty WWE roster.

Fandango dances out of the curtain, going through the motions of his rhythmic finger jabbing that will never be as over as Daniel Bryan’s slightly different rhythmic finger jabbing, but while he sways enthusiastically, there’s a haunted look in his eyes. Our flamboyant waltzer is heading into a ring full of four large bearded threatening cult-members with animal masks and stained overalls, and it’s surreal, freeze-frame moments like this when I can’t work out if wrestling is absurdly brilliant or just absurd.

Sadly for the small but fervent Fandango fandom, this match goes for under a minute and Fandango taps out to a bear hug.

Brennan insists breathlessly that Neville is ready to take “a giant leap” on his quest for the WWE Championship: which I quite like because it combines the dual suggestions of both Neville’s penchant for jumping large distances, and also the subtle implication that Neville may or may not be moonlighting as an astronaut.

We’ve seen this match in a couple of high-profile spots already this year; in the final of King of the Ring; on PPV pre-shows; and while it might have been misguidedly picked to please the British audience, they do little here to dazzle or differentiate from their previous run-ins. Neville wrestles competently, but with none of the urgency or passionate intensity that we know he’s capable of as recently as when he lost his NXT title to Sami Zayn, instead favouring cocky flips and inappropriately timed rest holds. In a single elimination tournament, every match should have a big fight feel. This one comes across more as just killing time until an angle– which it is– as shortly afterward, for the live crowd only, the Undertaker emerges to inexplicably piledrive hometown hero Barrett.

Neville hits the Red Arrow for the win, in a finish that feels very unrelated to the match prior to that point. More interestingly, this allows for a battle of NXT champions in the quarter final: Neville vs Owens.

“It ain’t forgive and forget: it’s get even, and get goin’!”

Backstage, Jey Uso is now sporting a beard so aggressively bushy that he looks like he might be auditioning for the Wyatts himself; but at least it might be an indicator which enables other, less fastidious reviewers (and Jerry Lawler) to be able to identify the Usos from each other. The Usos are infectiously happy to be here, and bubbling with a kind of directionless excitement to face the Wyatts again in the main event, clearly undeterred by last Thursday’s crushing defeat. I feel cautiously optimistic, reader! How about you?

Kalisto opens with a short box-in-corner video here, insisting to Ryback: “Don’t underestimate my size!”. I don’t want to be the semantics police every week: but did he mean, perhaps, don’t underestimate his power, because of his size? Don’t underestimate his skill? His potential? Because he is a pretty compact man, let’s be real here. Even if you assess his dimensions accurately. Then he drops a load of different dog metaphors. I thought he was a dragon?

They heavily foreshadow an upset Kalisto victory here, with Brennan squealing “I thought this match would be over already! Look at the underdog Kalisto!” whenever he does anything vaguely offensive. This is a fun and satisfying match, where Kalisto gets a chance to showcase his style against the steady base of Ryback, and the finish breaks up some of the crushing inevitability that the rest of the matches on this show have hanging over them like a dark cloud.

Kalisto gets a clean victory with the Salida Del Sol, and after a brief tense moment post-bell, Ryback offers him a heartwarming congratulatory handshake.

Alberto opts for the tried-and-tested football (soccer) heat here, which always strikes me as a lazy way to get heel rapport from a foreign audience: but referencing the rival Manchester football clubs of United and City as being indicative of a city divided was an impressively tidy way to tie back into MexAmerica. Zeb asks us to envision a hate-free Manchester, a thought experiment probably too complex and philosophical for a night of light entertainment at the MEN Arena. ,

Brennan claims here that Stardust says he is ready to bring the championship to the nether regions. Am I the only one suppressing sniggers at this particular choice of phrase? You wear it round your waist, Stardust.

Del Rio looks dominant once again, but it’s a dull and throwaway match, and ADR’s running enziguri is far more like a walking enziguri. Stardust’s new selling style is to yell out the injured body part, which really takes the hard work out of a notoriously difficult part of making wrestling credible.

Commentary spends most of this match talking about Roman Reigns and Triple H, not even entertaining for a moment that the current in-ring action could be significant or game-changing for the results of the tournament. When all the wide-eyed credulousness is gone even from our kayfabe representatives at the announce table, how are we supposed to invest?

Alberto gets the win with the double stomp in the corner. Finishers which are inherently opportunistic and rely on a very specific setup are frustrating in WWE, as the opponent finds themselves in the same unlikely vulnerable position match after match. Top rope finishers can sometimes give that impression: but this one, that hinges entirely on someone hoisting themselves slowly out of a Tree of Woe, is a particularly egregious offender.

This makes Kalisto face Del Rio in the next round, and cements our quarter-finals. 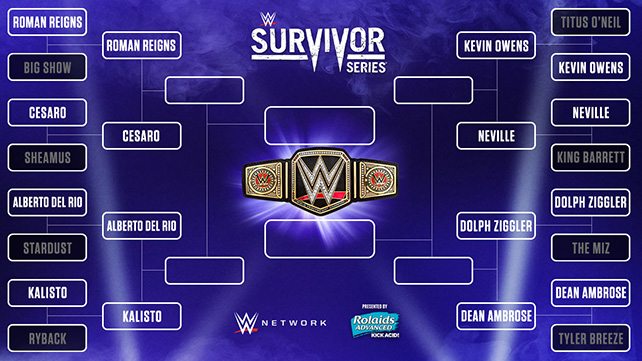 The Usos vs Luke Harper and Erick Rowan

This starts out as a disorganized brawl, with no one really certain whether the bell’s rung, or who should be in the ring, and everyone confused as each other.

Brennan name drops “The new face of Desolation Luke Harper” and also treats us to “The new face of Vengeance Erick Rowan”. Is this a thing now? Has everyone in the Wyatts got a face that represents an abstract concept? How long do these remain new faces? Who did they usurp? Is there someone in the locker room mourning that they are now only the Old Face of Desolation?

This match couldn’t be less about the Usos, and both the commentary and the crowd know it. The Wyatts control this match; with only brief hesitations where they stumble around dimwittedly to allow the Usos to throw splashes or haphazard superkicks. The match has nothing in the way of structure, and at some random predefined point, a double dive from the twins prompts Bray to initiate a beatdown, for a DQ finish.

Bray’s about to drop a second Sister Abigail , when the Undertaker’s music hits and his voiceover confirms his acceptance to the match at Survivor Series. Turnbuckle pyro erupts and Bray is left dimly illuminated in pale blue light as Taker’s music finishes the show.

This couldn’t feel further from the high-value, wrestling-dense, star-studded SmackDown it was advertised as: instead featuring a split roster, no Shield, no women, and no Undertaker for the television audience. This was a diluted episode that did little to tie plot points together, advance the story, or build hype in a meaningful way for the next special.

Sometimes it’s hard to work out whether the key to appreciating and understanding WWE plotlines is to pay very close attention; absorb and analyse everything– or if the real secret to enjoying it is to pay less attention. I’m increasingly inclined to believe the latter. 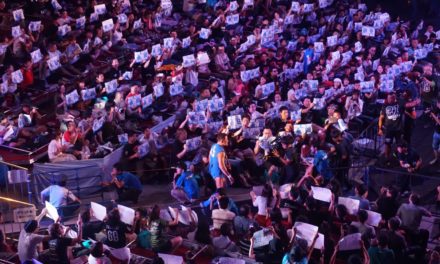 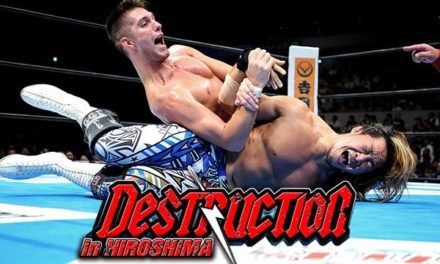 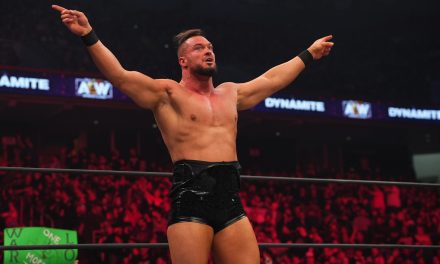 The Good, The Bad, and the Hungee: AEW Dynamite (May 4)