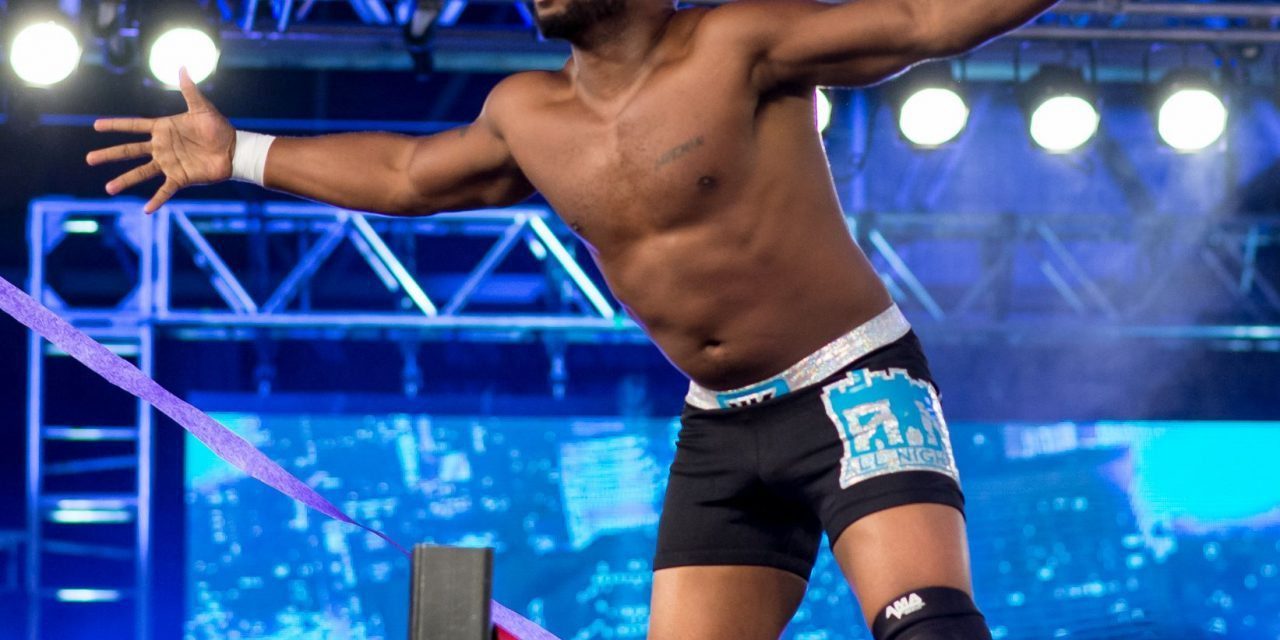 I feel bad for Cedric Alexander. He has always been a wrestler that I’ve liked, but never had much juice here in Ring of Honor. His heel turn was much needed and he seemed more interesting with Veda Scott after the Moose feud, even though Veda doesn’t appeal to me as a performer. Now, though, Alexander has been saddled with this miserable lawsuit angle. I’ve spent many words criticizing the story but, seriously, lawsuit angles are the worst. Not only does it not build heat for Alexander but, in this particular angle, there isn’t even a foil for him. I guess he’s feuding with Nigel McGuinness but that obviously isn’t leading to a match. He’s just back in the purgatory populated with those who don’t have any story of consequence.

However, while I don’t like Veda Scott, I’d still prefer commentary not treat her so distastefully. Kevin Kelly’s anti-lawyer screeds are clichéd but fine. But just between the time Alexander’s music hit and he and Scott hit the ring, Nigel commented that he’d “had [his] eyes on her for years, for a different reason” and that she had probably had “plenty of things hit her in the face.” Gross. Let’s just have a wrestling match.

This was a back and forth affair but, outside of ACH’s Air Jordan, these guys had a tough time keeping the crowd into the match. I’m not sure how this match was situated at this taping but the crowd seemed disinterested. Part of that may have been that the match was relatively run-of-the-mill for performers as talented as Alexander and ACH.

That lack of energy from the combatants may have been because the match was apparently more of an angle. The finish came when Alexander attempted a springboard maneuver that was unsuccessful when Cedric slipped on the top rope and fell to the mat. ACH capitalized and hit the Midnight Star for the victory. The slip seemed like a botch but Veda accosted Nigel afterward at ringside and suggested she would amend her Complaint against Ring of Honor to add a count regarding failure to properly inspect the ring prior to the match. That could have been an ad lib after what was actually a botch but I tend to doubt that anyone involved is that clever on their feet. **

Will Ferrara vs. Caprice Coleman

Going from one smoking hot angle to another, nearly two months ago, Prince Nana handed Caprice Coleman an envelope after a match but we never found out the exact contents of the envelope. And boy have I been on pins and needles since then! OK, I actually forgot that it ever happened until they showed the clip again. Caprice cut a promo before the match, which was clearly meant to serve as Coleman continuing the originally teased heel turn.

The crowd was again pretty dead throughout this match but that could have been because nobody could possibly care about Caprice Coleman in Ring of Honor in 2015. As always, Ferrara worked extremely hard and did everything with purpose. Unfortunately, he spent most of this match selling for Coleman but Coleman’s offense wasn’t impressive enough to let Ferrara shine in that role. Ferrara mounted a small comeback but Coleman eventually injured young Will’s shoulder. Caprice took advantage of that injury and locked in his Judgment’s Feet submission to beat Ferrara.

I want Ferrara to have something to do but I was not hoping it would be what happened after his loss here. As Ferrara attempted to exit, Prince Nana approached him with an envelope similar to the one he gave to Caprice Coleman lo those many weeks ago and Ferrara took it! If you won’t tune in next week to find out what was in that damn envelope, pro wrestling might not be for you. *3/4

At Least They’re Building One Program

There would be no Exotic Goddess this week. In her place was Adam Cole to talk about his previous victories over Kyle O’Reilly, including on last week’s ROH TV, and why he’s going to beat him again. There wasn’t much to this but I like that they’re keeping their top feud fresh in the minds of the viewers.

Before the match, we were reminded of ANX’s victory over The Briscoes at All-Star Extravaganza. I found it an odd booking at the time; The Briscoes didn’t really need the loss and ANX obviously needed a win in their debut. But I suppose The Briscoes are pretty well bulletproof.

But if I were The Briscoes, I would refuse to lose to a team featuring a guy who looks as goofy dancing to his team’s theme music as Rhett Titus. Sure, Mark Briscoe acts insane, but he seems legitimately insane. Rhett Titus comes off as a try hard.

Okay, this crowd was dead. It’s pretty rare that an ROH crowd sits on its hands in a Briscoes match but here we are. In defense of the crowd, this was another match that started as a paint-by-numbers affair. It’s hard to tell whether the crowd was dead because none of the matches were that exciting from start to finish or whether the matches weren’t that exciting because the crowd was dead so why bother. Regardless, the match picked up in the final third, an acceleration that appeared to be spearheaded by Kenny King. When ANX grabbed their penultimate advantage, King was handling the majority of the offense and he was simply going hard. The rest of the competitors seemed to follow his lead though it was likely the pre-planned layout of the contest.

Regardless, the crowd did heat up as the match reached the car crash portion of the proceedings. King remained the highlight of the foursome, though his effort wouldn’t be enough as a Jay Driller and Froggy Bow to Rhett Titus would finish off ANX and even the series between the two teams. After the bell, King seemed to indicate to Jay Briscoe that he wanted one more match and Briscoe seemed to agree. However, commentary sold the finish as if it got The Briscoes closer to a title shot. We shall see. **1/2

Final Thoughts: This was the worst ROH TV episode in some time. After they ran out of New Japan matches, I thought ROH was going to get back to building their own stories, and they’ve done so at times. But the problem may simply be that this roster just isn’t deep enough. Or that ROH doesn’t know how to book the roster they have for their TV tapings so they can make consistently compelling television. I see people on Twitter talk about how exciting ROH TV is from week to week but sometimes I wonder if I’m watching something different.