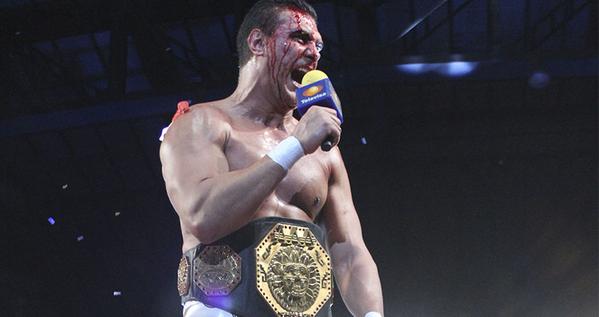 Update: the chart on the bottom of this post was updated on 12/04/15; one missing match found changed the last twenty or so matches.

AAA had a television taping Friday night in Xalapa. AAA’s linear heavyweight championship was on the line Friday night. These two sentences are completely unrelated.

Fans of the WWE Linear Championship were briefly abuzz after Hell in a Cell with the possibility of the theoretical lineage escaping WWE. Alberto Del Rio defeated John Cena for both the actual US Championship at Hell in the Cell, and also took the reigns of the imaginary title history in the process. (You can read more about how linear championships works at that link above; the quick version is “who would be champion if every singles match was a championship match?”) It seemed for a moment as though Alberto might return to AAA once more to lose their heavyweight championship, sending the linear WWE championship to an unpredictable future in Mexico. It now seems very unlikely Alberto will be wrestling in AAA, much less losing. He may yet wrestle in Puerto Rico, but he’s unlikely to lose there, and the WWE linear history will likely remain bound to the home promotion.

What about the other side to this? Where does this leave the AAA Linear Mega Heavyweight Championship? Alberto is still the real life AAA champion, even two weeks after he’s left the promotion. If he was linear champion, the lineage could spend the next three years bouncing around the WWE upper midcard, much like Alberto himself. It turns out, after some research, Alberto isn’t the AAA Linear Champion.

No one in AAA has been the linear champion in quite some time.

The AAA World Heavyweight Championship is a relatively new championship, coming into existence in 2007. The idea of the promotion centering around one championship is foreign to Mexico and hasn’t had much traction outside of the Canek-focused UWA of the 80s. AAA had previously tried to create central championships, but had ended up with lots of miscellaneous championships floating around.

In attempt to modernize/Americanize, AAA put many of those championships into a tournament to create one single heavyweight championship. Mesias defeated Chessman in the final to become the first champion.

(Mesias actually won the match by disqualification, because “AAA”. That’s one difference I’m using for this history than the WWE one; Mexican titles can change hands on DQs, so it makes since the Linear Title can as well.)

Mesias was a long running AAA champion in a promotion with few singles matches, so it would seem likely he would also be linear champion for a long time. He was only linear champion for a few months, because he was also Judas Mesias in TNA, a scary monster with a strange back story controlled by a malevolent manager. (That seems familiar.)

Judas Mesias destroyed wrestlers in late 2007 and early 2008, but lost to Christian Cage before Cage challenged for the TNA heavyweight championship on a PPV. That’s the last time the AAA Linear Championship would be held by an AAA luchador. It doesn’t stay in TNA long either.

Christian lost the TNA title match to Kurt Angle, the reigning TNA Heavyweight champ. Kurt Angle also happened to be in possession of the third generation IWGP Heavyweight Championship, having won it from Brock Lesnar after Lesnar walked out of NJPW with it. Angle’s next loss was to reunify that belt with the recognized IWGP Heavyweight Champion, Shinsuke Nakamura. The Linear Championship also went with Nakamura, and left North America permanently.

The AAA Linear Championship stayed in Japan for a while, following along with the title history of the IWGP Heavyweight Championship. The only wildcard is the G1 tournament, but even that doesn’t cause any serious disruption. Keiji Muto skips the tournament in 2008. Hiroshi Tanahashi participates in 2009 and the belt passes through a few hands (Takao Omori?) but ends up back in the hands of the next IWGP Champion despite Tanahashi himself vacating the real title due to injury. Togi Makabe brings the AAA Linear Championship into the 2010, where it again changes a few times. It’s still safely in NJPW when Toru Yano ends the tournament with the Linear Championship in-hand. The small problem is Toru Yano is a crazy lunatic, one who somehow loses a match to DQ to Taijri. (If DQs don’t work for you, Tajiri pins Yano cleanly in their match.) Everything falls apart from there and I completely blame Yano.

2010 Tajiri is the ace of SMASH, a promotion which delighted in bringing in obscure foreigners and generally weird matches. Tajiri retains control of the AAA Linear Championship for a number of months, including defeating KANA of all people and making us wonder what weird paths the title would go down if only she had won.

Tajiri’s reign comes to an end against a Michael Kovac of Finland, for the FCF Finish Championship. Kovac is next spotted in Germany, losing the linear title to Tatanka. Yes, WWF native American wrestler Tatanka. Now we’re really in the weeds. Tatanka reigns for only a week before losing the AAA Linear Championship to Joe E. Legend in a match for the DWA Heavyweight title.

Legend, in turn, loses the AAA title three weeks later to an actual masked luchador. Not an AAA one, we’re long past that, but England’s own El Ligero.

The AAA Linear Championship is complete mayhem from that moment in 2011 on. It bounces around England, Scotland and Denmark. It changes hands in PROGRESS Wrestling, and it goes to people the PROGRESS podcast hosts might have trouble identifying. I sure can’t identify them; there’s champions who I’ve heard praised on an Alan4L podcast, and there’s people who I’m not entirely sure are real.

Incredibly, U-Gene is champion for two days. Super Crazy wins the belt for a hopeful few hours before losing it again as part of a weekend long tournament. There’s long reigns mostly of inactivity and there’s short reigns in promotions I didn’t know existed before trying to solve this riddle.

It’s at this point that I need to acknowledge what I’ve tracked down is probably not entirely correct. I leaned entirely on wrestlingdata/genickbruch.com to figure this out once it left Mexico. You don’t really appreciate the scope and breadth of work those sites do in capturing results from all across the world until it’s 1:00 a.m. and you’re looking through wrestling results in Denmark.

Even with all their diligence, shows are going to be missed once you get down to the lowest profile levels of wrestling. As best I can tell, the current AAA Linear Champion is a fellow named Kaden Garrick, a man with only 15 known matches. (Cagematch.net, also a fantastic resource, doesn’t even list this person in their database.) At the time of this writing, he’s undefeated in singles matches since he won the linear title. (Though we don’t have results from WrestleZone’s Halloween Hijinks 2015 show yet, or any confirmation that the show actually took place).

A 365-day break (causing the linear title to be vacated and return to the real life AAA champion) is probably the only way this title is returning to Mexico in the near future, so I looked for the man’s facebook account to see if he left the wrestling business.

Garrick has been active and looks as though he’s even wrestled in various (linear title) singles matches the last few months. It just seems all the excitement and thrills from Scotland’s WrestleZone events have not made their way into the massive wrestlingdata database. I’m sure they’ll be there in time, but it also points out there’s probably little shows here and there involving previous champs missing, and the “true” AAA linear title could’ve forked off at any point.

It’s not on wrestlingdata yet, but Mr. Garrick wrestled former AAA Linear Champion Chris Archer (not this Chris Archer) this past Friday night in Huntly, Scotland.

I’d normally draw the line at looking at anything past a database site – looking through Facebook for Scottish indie results is about three steps past where I expected to go with this. WrestleZone says Archer won that match, which makes him the latest linear champion, at least for this weekend. 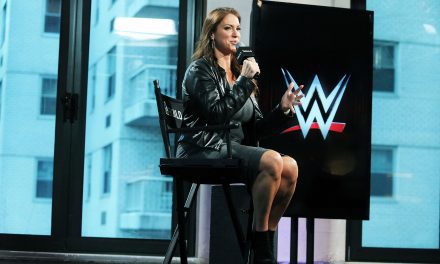