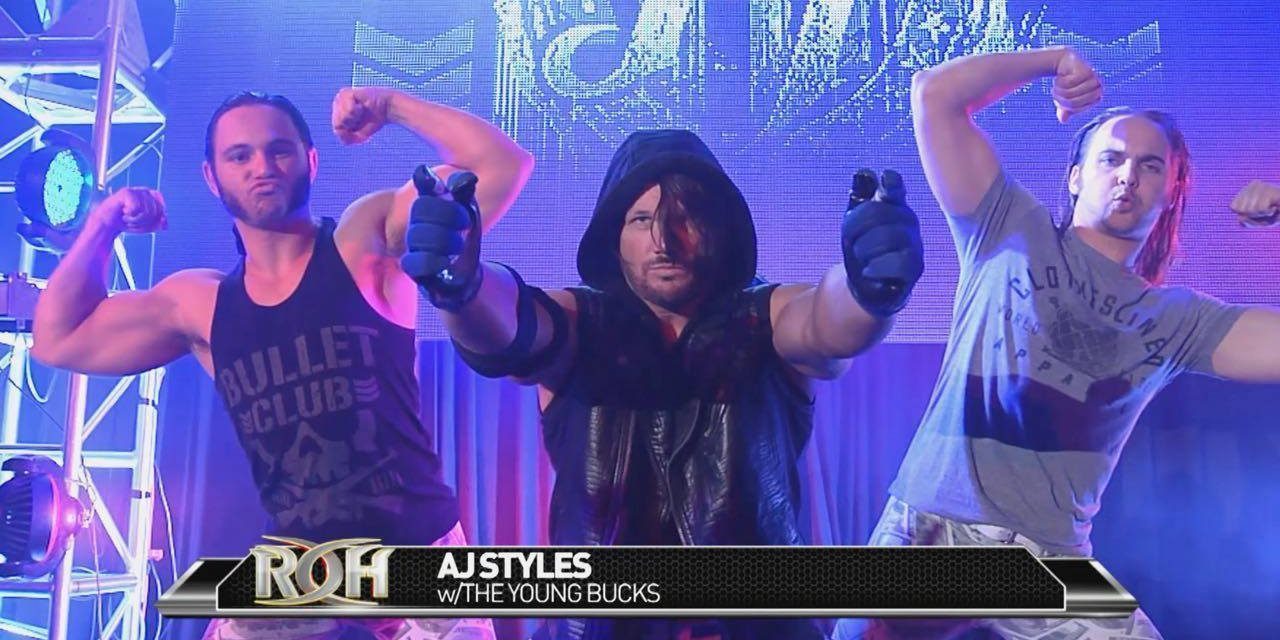 I was not impressed with last week’s episode. I’d hoped that Ring of Honor would continue building the momentum of their own storylines, as they did the week prior, but that hope was ill-placed. However, two things stood out: a wonderful interview segment featuring Jay Lethal and Roderick Strong, as a means to set up a future Television Championship match for Strong, in which Lethal was as brilliant as always; and a Kyle O’Reilly promo following the main event, which set up tonight’s main event triple threat match featuring O’Reilly, Adam Cole, and AJ Styles, and began to show O’Reilly as a much more serious character who could fit in the World Championship picture. ROH would build on both of those moments this week.

In fact, the show opened with the best Kyle O’Reilly promo I’ve ever seen, which focused on his triple threat match later in the show. O’Reilly has really answered the bell with regard to his program with Adam Cole. This kind of story is exactly what O’Reilly needed but he had to step up his game for it do what it needs to do for him. As ROH built to O’Reilly’s World Championship match with Jay Lethal, I regularly complained that Kyle simply had not been portrayed as a serious enough character to take seriously as a World title threat. He generally used his time on the mic to make silly jokes and when he tried to transition to that serious character I wanted, he seemed like a nerd. Showing their continued belief in him, ROH still moved on to this new program, which has all the juice necessary for a performer to sink his teeth into it. But KOR had to grab the proverbial brass ring. If his performances on the mic in these last two episodes of ROH TV are any indication, he has done just that and should be on his way to being a legitimate title contender rather than a filler program.

Mark Briscoe joined Kevin Kelly and Nigel McGuinness on commentary. After Mark’s first words, Nigel had the look of a man forced to participate in a conversation with a woman he has a crush on and his terribly drunk friend who might say something racist.

Silas Young & Beer City Bruiser (with The Boys) vs. The Young Bucks

Mark Briscoe: “You talk about a tag team; look at the Beer City Bruiser!” I have no idea what this means but I wish there were a camera solely trained on Nigel’s reactions to Briscoe’s banter.

Young and Bruiser are not The Bucks’ normal style of opponents. It did seem that clash of styles caused the match to get off to a somewhat slow start as Young and Bruiser couldn’t get to their spots quite as fast you would usually see in a Bucks match. But once Bruiser was far away from the action, Young was able to get going much nearer The Bucks’ pace. However, just as the match was heating up, Silas grabbed the mic and said the match was originally scheduled to be between The Bucks and … THE BOYS. And since Young and Bruiser had already softened up The Bucks, he was now going to allow The Boys to finish the job. NR

The Young Bucks vs. The Boys

While they are super duper green, The Boys were much better equipped to bump around for The Bucks.  The teams started out with comedy spots but The Boys actually took the advantage for a short period of time. And they looked pretty good! Unfortunately for them, a Superkick Party rendered The Boys’ advantage short-lived. In a hilarious display of strength, Matt picked up both of The Boys to finish them off with a More Bang for Your Buck. I guess The Bucks didn’t sell enough merch in San Antonio. **3/4 (for the entire segment)

Kelly: “How much Halloween candy do you think The Young Bucks get?” Mark: “THEY DESERVE A LOT!”

The Wheels of Justice Turn Quickly in Ring of Honor

If you wanted an update on the hottest angle in pro wrestling, Nigel McGuinness has been served with Veda Scott and Cedric Alexander’s lawsuit! I guess it would make sense that Veda could get Nigel served that quickly since she knows where he works but why on earth would Nigel McGuinness be the proper person to serve on behalf of Ring of Honor? He just makes the matches! This isn’t the audience for legal analysis of a fake lawsuit, is it?

Will Ferrara vs. Roderick Strong

Mark Briscoe spent the match putting over Will Ferrara but it seemed mostly a shoot. He just really likes the kid. Luckily, this was Ferrara’s best performance since he’s been in Ring of Honor. He mostly fought “from underneath,” as the announcers kept reminding us, and worked his ass off throughout. The match succeeded at making Ferrara look legit while also keeping Strong… strong for his upcoming World Television Championship match with Jay Lethal. Ferrara used a tornado DDT on the outside to gain the momentum in the match but Strong was able to recover and put together a combination that ended with a Stronghold and Will Ferrara tapping out. Notably, Kevin Kelly made a point of stating that Roddy had not used the Stronghold in his first two matches with Lethal. I trust that will play in to their title match. **3/4

This week’s Inside ROH segment featured Mandy Leon setting up that final confrontation between Lethal and Strong. Strong did not make an appearance but there was a very good Jay Lethal promo, which discussed the future child he plans to have with “the hottest woman in the world,” and wondering where Nigel McGuinness was when Jay Lethal was buying a Mustang. You’ll have to watch this one, folks.

Jay Lethal was on commentary, since AJ Styles is the new #1 Contender to his World title. Each participant in the match brought out their respective crews but Nigel sent everyone to the back so that Lethal was the only uninvolved wrestler at ringside. I expected the future Lethal/Styles match to play second fiddle to the Kyle O’Reilly/Adam Cole storyline but commentary spent more time on Lethal/Strong than anything, which seemed a bizarre choice.

The match itself was rather boring. It was full of triple threat clichés: the first part of the match was capped with goofy dives that none of these guys are really known for, while the second part of the match saw several of the played out moves where each competitor has another competitor in some kind of submission hold. The third and last part of the match devolved into each guy getting in his signature spots. There just wasn’t anything to get excited about.

Toward the climax of the match, Styles reversed a cross armbreaker and put O’Reilly in position for a Styles Clash when Adam Cole hit Styles with a superkick. After sending Styles to the outside, Cole finished off O’Reilly with a fireman’s carry knee neckbreaker.

As hot of a feud as it is, I thought there was way too much interaction between O’Reilly and Cole here. I would want to save almost all of that for their eventual blow off. Regardless, Jay Lethal on commentary was the best part of the match, taunting Nigel McGuinness and randomly lamenting his memory: “Dammit, I forgot my notebook!” **

Final Thoughts: ROH got back on track this week. This episode served to advance Lethal vs. Strong, Lethal vs. Styles, and O’Reilly vs. Cole. It also continued the rise of a newly serious Kyle O’Reilly, showcased an improving Will Ferrara, and gave us Silas Young, The Boys, and The Bucks for pure, uncut entertainment. There are no matches or segments that you need to seek out but as an hour of wrestling television, I enjoyed it and it made me look forward to checking back in next week. 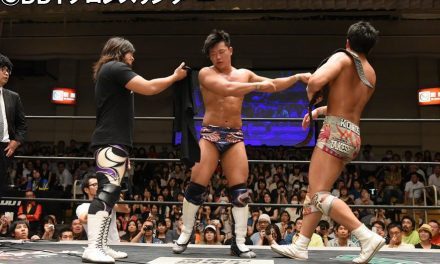 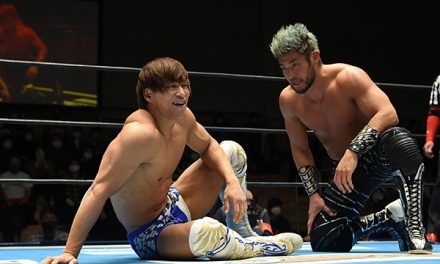 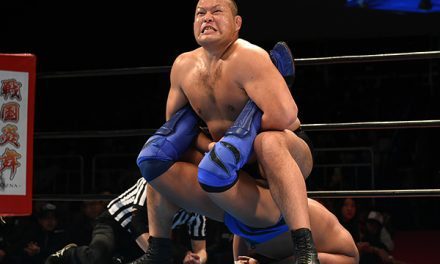