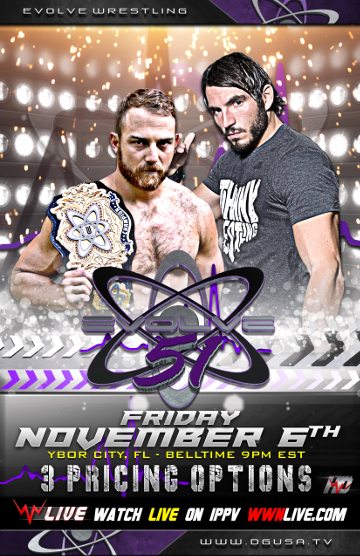 EVOLVE 51 had the potential to serve as a crossroads for the company and several of the wrestlers. The main event between Timothy Thatcher vs. Johnny Gargano was a battle with more than a belt at stake — the position of company ace was also on the line.

Ethan Page looked to embark on new path following a humbling weekend in New York. Peter Kassa, Lio Rush and Matt Riddle all looked to continue to take their careers to new heights during the show by picking up a win in front of a worldwide iPPV audience.

Kaasa and Page entered this match trending in opposite directions. Based on his impressive performances at the last pair of EVOLVE shows and in the FIP trios tournament, Peter Kaasa is the hottest talent in the company. Ethan Page, however, suffered two crippling back-to-back defeats in New York, one of which was the finale of his blood feud with Johnny Gargano. On top of that “All Ego” took a tongue lashing from Sami Zayn which seemed to leave him unsure of himself.

Page’s lack of self-confidence was evident when Kassa easily out wrestled him during the opening stages of the match. Eager to score another big win, Kassa worked over Page’s leg and the injury hampered “All Ego” the rest of the match. Perhaps sensing that he was on borrowed time, Page picked up the pace and the intensity of his moves. Each maneuver by Page was high impact and designed to potentially put Kassa away quickly. Kassa persevered and survived Page’s pet moves, including his springboard cutter. Forsaking his earlier mat work, Kaasa turned to showmanship to beat Page and a 630 senton did enough damage to earn Kaasa the pin.

I’m really intrigued to see where Page’s redemption story arc goes. His melancholic attitude early and panic attack later in the contest were excellent character work. Again, Peter Kaasa stood out as an athletic anomaly. He’s not long for the indies folks so enjoy him while you can. ***½

Former UFC fighter Matt Riddle made his EVOLVE debut during the New York double shot last month and exhibited tremendous potential. Each of his first two matches were kept short. His contest with Drew Gulak was to be the biggest test of Riddle’s young career.

Gulak left his grappling boots in Pennsylvania and tried to out wrestle Riddle for the majority of the match. A consistent attack of suplexes, slams and stomps kept the rookie on the canvas and prevented him from building up any momentum. In the few instances of offense he did manage, Riddle attempted so many submission holds that the veteran Gulak easily deciphered his strategy and quickly put Riddle back on the defensive.On the other hand, Gulak was not able to put Riddle away easily and in a momentary lapse in judgment, he headed to unfamiliar territory, the top rope, to try to end the match. “Deep Waters” countered and rolled through into an arm bar which Gulak quickly submitted to.

Riddle plays a cocky character so it made sense for him to underestimate Gulak and then promptly find himself being taken to the woodshed. The fluke nature of his win not only protected Gulak but also further legitimized the anger of Riddle’s submission game. Solid ring work and a tight narrative made this an enjoyable match. ***½

Gulak got on the house mic after the match and praised Riddle’s abilities. Riddle called Gulak just another stepping stone and his insult prompted an attack by Gulak’s protege, Tracy Williams to set up their match Saturday night.

Rush was a part of Team Maryland Championship Wrestling during the FIP trios tournament and was the standout performer on his team. His style is similar to ACH or Cedric Alexander, a combination of high-flying, strikes and nifty slams.

Like Rush, this was Fred Yehi’s maiden voyage in EVOLVE and each seemed eager to make an impact. Yehi works a shoot style, complete with one of the nastiest German suplexes this side of New Japan. He attempted to slow the pace of the match down by grounding Rush. Yehi’s plan worked for most of the contest until Rush’s window of opportunity presented itself and he rode an offensive surge to pinfall victory thanks to a frog splash.

The third match of the night was designed to allow both combatant’s to show what they could do. I think that both proved they are competent workers and are deserving of future bookings. ***

After a slow start that involved quite a few rest holds, Williams vs. Stone settled into a nice, competitive match. This was the best that I’ve seen Martin Stone look in any of his FIP or EVOLVE appearances. For once he wrestled like the technical wizard he is promoted as.

Williams has quietly put together a string of quality matches over the previous few shows and he put in another first-rate outing against Stone. Towards the end of the match, Williams hit Stone with a nasty sequence of moves: a piledriver, a DDT and finally a crossface that Stone tapped out to.

This match was solid, but nothing special, and it established that Williams has a nasty streak the going into his big match with Matt Riddle Saturday night. **1/2

Nese and Perkins was a matchup between wrestlers with contrasting styles. Perkins aimed to use his speed and technical craft to stay one step ahead of Nese. The founder of the PAB, however, wished to demonstrate that his physique is not just for show but is also an indication of his raw power.

The match was wrestled very evenly all throughout the contest. Nese did his darndest to break TJP with hard slams to the mat. Perkins would not break and slowly chipped away at one of Nese’s arms. All of Perkins’s work paid off after a missed 450 splash by Nese late in the match, Perkins rushed in at the prone Nese and locked in an arm bar that immediately prompted Nese to tap out.

On a roster full of gifted workers, Nese and Perkins are easy to overlook, which is an indication of how deep the EVOLVE roster is because both men are have stellar years in the ring. If this was any other promotion, this match would be the best on the card, but since this was an EVOLVE show it was just another solid match on a solid show. ***¾

The second to last match of the show was Drew Galloway’s first since his suspension for attacking the PAB was lifted. Kaleb Conley entered the fray with instructions from his manager So Cal Val to wreck Galloway as punishment for the Scotsmen putting his hands on her.

Conley took Val’s words to hurt and attacked Galloway during his entrance. The two brawled all over the Orpheum. Conley ate a nasty looking slam on the bar from Galloway. When the match moved back to the ringside area, Conley sent Galloway flying onto the first row of chair. From that point on, both men started throwing bombs at each other. Galloway survived a string of kicks and drivers from Conley and Conley survived a sitout powerbomb and an avalanched air raid crash from Galloway. In the end, Galloway’s trusty Future Shock DDT put an end to the brawl.

Drew Galloway has kept brawls in vogue in EVOLVE even as technical affairs came to dominate the promotion’s landscape. Kaleb Conley came up big in this match and showed he can wrestle as a vicious heel. The current FIP World Champion has always stood out to me as a wrestler who has not demonstrated the full extent of his abilities. At EVOLVE 51, he more than held his own against the always excellent Drew Galloway in a wild, wild fight. ****¼

Before the main event, Ethan Page tried to make amends with Johnny Gargano. The Fray Movement’s favorite wrestler told Page to “get out of my ring.” So much for forgiveness.

At EVOLVE 50, NXT star Sami Zayn proclaimed Johnny Gargano to be the face of the WWN family of companies. Current EVOLVE World Champion, Timothy Thatcher, took offense to those comments and confronted Zayn. In response, Zayn said that Thatcher needed to beat Gargano to earn that distinction and thus the main event for EVOLVE 51 came to be.

From the get go, Gargano showed that he was all business by taking the champ right to the mat in an attempt to beat Thatcher at his own game. Gargano’s pride got the best of him in that exchange and Thatcher quickly asserted himself on the mat, again proving why he is one of the best technical wrestlers in the world. To Gargano’s credit, he did manage to inflict some damage on Thatcher’s leg, but Thatcher injured Gargano’s left hand and arm in the process. Due to the damage they both had taken, neither man was able to execute several of their signature moves.

All throughout his DGUSA/EVOLVE career Johnny Gargano has always found a way to win the big match. It appeared that was the case again when he grounded Thatcher with an ankle lock and then floated over the Garga-No-Escape, easily the best booked finisher in EVOLVE. Thatcher crawled to the ropes with ease and finally submitted Gargano with his pet arm bar/kimura hybrid to retain the title.

The school of thinking going into this match was that it would either be a passing of the torch moment or the status quo returning to Sapolskyland. As the match progressed it became clear to me that the entire narrative was centered around this being Gargano’s last hurrah as the ace of the promotion. Gargano tried to wrestle the style that became in vogue in his home company over the last year, and though his effort was valiant, he was simply not good enough to beat Thatcher. With the loss, the company’s new ace and prefered fighting style took their throne.

The symbolism, selling and narrative made this one of the best EVOLVE main events of the year. It’s an easy MOTYC and just might crack my top five at year’s end. ****¾

Drew Galloway hit the ring post match and challenged Thatcher to a title contest. Thatcher agreed and that match will headline EVOLVE 52.

Final Thoughts: EVOLVE 51 is one of the better shows the WWNLive family has put on all year. The main event is an instant classic and only one match was not able to break the *** barrier. I think it will be worthy in company history however.Johnny Gargano’s DGUSA title victory in November 2011 ended the era of Japanese talent ruling the roost and started the era where homegrown American talents were prominently featured. Thatcher’s victory, the rise of the workers on the undercard and the rumors of a relationship with WWE have EVOLVE on the dawn of a new chapter in it’s history. 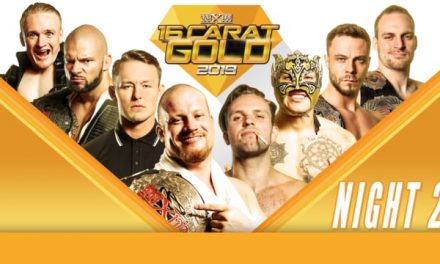 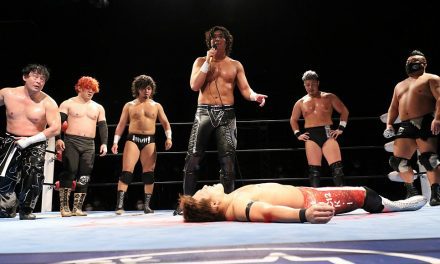