When Bray Wyatt cut his most recent promo on WWE Monday Night Raw, I wasn’t watching the show live. At the time I was eagerly awaiting the latest episode of Fargo while simultaneously tapping my toes to the new Brandon Flowers solo album

. That said, I wasn’t ignoring Raw outright. I had an up-to-date recap on my computer screen, my fingers always at the ready to hit the refresh button whenever I felt it necessary.

So when I read that Bray had cut a promo saying he had consumed the souls of The Undertaker and Kane, thereby taking their powers, and then proceeded to command lightning and pyro to appear seemingly from out of nowhere, I couldn’t help but chuckle to myself about how awfully cheesy the whole thing sounded. I hopped over to Twitter to see some people’s reactions to the promo. What I found were less than stellar reviews.

The next day I went to YouTube to actually watched the promo. It can’t be that bad, I thought. And it wasn’t bad. At least, what I would classify as bad. Cheesy, for sure. Extremely cheesy. I’ve heard that lightning sound effect in more horror movies than I can count.  What it really was, in my opinion, was out of place.

That could describe the entire character of Bray Wyatt. Out of place. He doesn’t fit in this version of WWE. Bray is a supernatural madman who, over his tenure on the main roster, has utilized demonic children, hologram-projecting lanterns and spooky rocking chairs to run roughshod over the company.

WWE, on the other hand, has really done a lot to dampen their crazy fantastical side in favor of a more realistic approach. Most of their wrestlers don’t have wild gimmicks; instead they are portrayed as the fighters they are. Guys like Kevin Owens, Cesaro, Sheamus, Rusev, Wade Barrett, Alberto del Rio, and others look and feel like wrestlers, rather than hockey players or vampires or plumbers who just so happen to wrestle.

This enhanced sense of realism is also prevalent outside of the ring. WWE places a heavy emphasis on social media, where wrestlers often give the fans an insight into their personal lives. The WWE Network has plenty of behind-the-scenes documentaries, as well as the popular program Table for 3, where babyfaces and heels sit down together for a nice nosh.

It’s a very strange dichotomy, one that puts Bray in an awkward position. In a world where Kevin Owens is talking about fighting to make money for his family and put food on the table, Bray is spouting off about eating someone’s soul. It makes Bray’s character seem rather silly, doesn’t it? And when your supposed upper-midcard/main event heel is more silly than serious, more Stardust than Cody Rhodes, then how can anyone treat him with legitimate respect?

Granted, Bray isn’t the only one that is “out there.” WWE still has its fair share of exaggerated characters. The aforementioned Stardust, The Ascension, and The New Day are all larger than life characters that regularly go over the top in their performances. Yet neither New Day or Ascension or any of the other wacky wrestlers on the roster have reality-bending powers.

It’s also true that Bray is not the only supernatural character on the roster. Undertaker and Kane are the last holdouts of the ancient mystic gimmicks of the 1990s and early 2000s, a time that featured Papa Shango, The Ministry of Darkness, Kevin Sullivan and the Dungeon of Doom, Mordecai, among others. But those times are over. Undertaker only makes a few appearances a year, while Kane in recent years has more often than not been a suit-wearing corporate stooge for the Authority. He can hardly be considered a beacon of demonic wizardry. At their ages, their time is almost up. So Bray very much sticks out as a sore supernatural thumb in WWE.

It would be the same if Bray was in Ring of Honor. Ring of Honor is supposed to be a serious wrestling company, with serious wrestlers like reDRagon, Jay Lethal, Roderick Strong, Michael Elgin, and the like. Bray would be an even bigger fish-out-of-water with his shtick there than in WWE.

Lucha Underground, on the other hand, would be a perfect fit. The world of Lucha Underground is built around the fantastic. There’s a man-eating monster in a cage, a firebreathing dragon-man, and an indestructible muscle-bound masked giant whose name is literally translated as “A Thousand Deaths.” Yeah, Bray would be right at home there with his lightning bolts.

I’m not saying that Bray shouldn’t exist in WWE at all. Rather, the mistake was giving a supernatural edge to him. Bray Wyatt can work as a sociopathic human being, a backwoods cult leader who slowly but surely corrupts the locker room like a cancer. He preys on the weaker wrestlers, bringing them into his fold, gains momentum over the months, and emerges as a top villain with an army of followers behind him. Then you have your top babyfaces go to war with him. Fantasy booking at its finest, I understand, but in 2015 that sounds a lot more realistic and exciting than magic lanterns and spooky children. 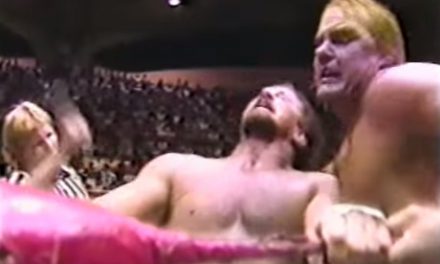