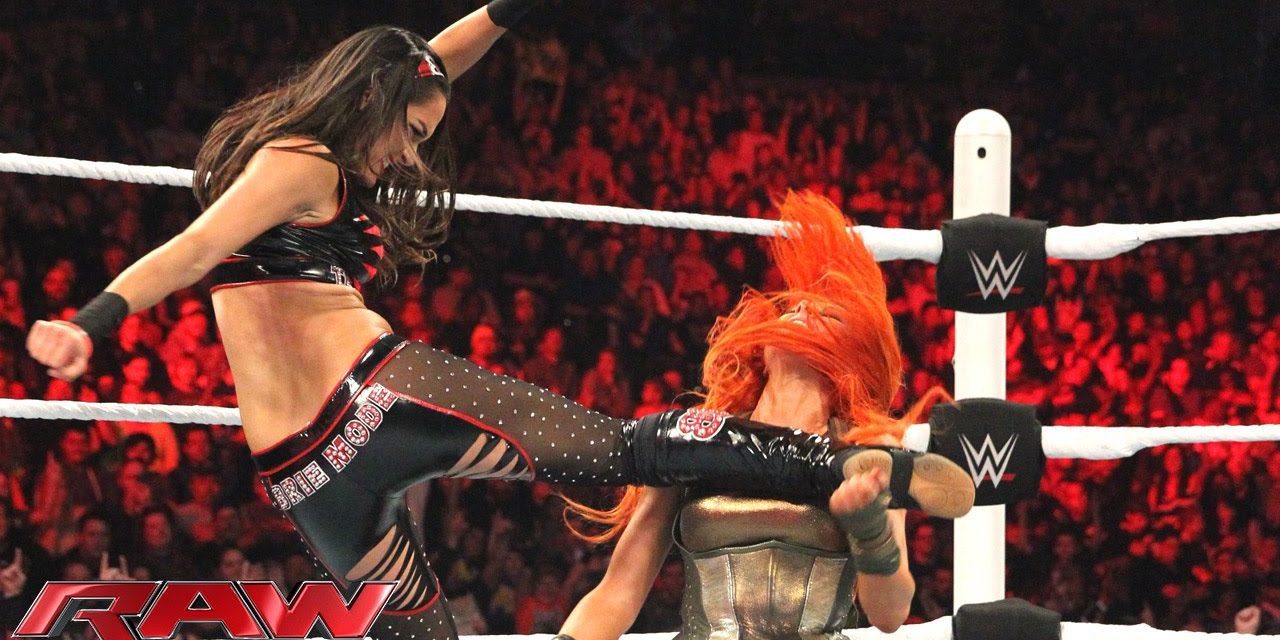 Last week’s episode of WWE Monday Night Raw was pretty decent due in the large part to being a wrestling-oriented show with some early build towards WWE Survivor Series 2015. Can WWE keep the momentum going? Here’s a few things to think about before tonight’s show:

Roman Reigns came out to start Raw and received a nice pop from the crowd. Reigns then cut a solid but somewhat generic promo promising that Seth’s luck is due to run out soon as he’ll (Reigns) be the one with the title after Survivor Series. For once the crowd was completely behind Reigns and his intentions.

Rollins came out and said he knows he’s good, but he (Rollins) is also good too. They bring up the finish to WrestleMania 31 where Rollins pinned Reigns to win the title. Seth called him second best and he’d only be remembered as the guy who carried his bags.

Reigns responded by telling Rollins to get down to the ring but then the greatest duo in the entire universe, The Authority, came out. Stephanie asked the crowd if they wanted a WWE title match between Rollins and Reigns. They all cheered like they wanted it, but unfortunately The Authority were heels this week as they said it would be at Survivor Series and made fun of Colorado, saying they were high, but how high are you guys that you thought you’d see this match here tonight?

Hunter eventually made a 5-on-5 Survivor Series elimination match, with Rollins and Reigns as captains. Triple H then told Reigns that choose wisely, because your survival will depend on it.

The match was very bland and acted more as a backdrop to the feud between Ziggler and Tyler Breeze/Summer Rae. Breeze was using his selfie stick to record Ziggler, so Ziggler got distracted and walked right into a Pop-Up Powerbomb from Owens for the win.

Breeze went into the ring to pose with the selfie stick when Ziggler punched him. Breeze recovered quickly and laid him out with the Beauty Shot, then he and Summer took selfies over his prone body.

They highlighted a 1987 Survivor Series match putting over the Honky Tonk Man. While he was the last guy on his team to survive, he also bailed, giving the victory to Randy Savage and Ricky Steamboat.

Backstage, Seth Rollins approached Kevin Owens and asked him to join his team, saying that Rollins vs. Owens would be a great WrestleMania match. Actually, it would. Owens agreed to join the team, saying he’d owe him one down the line.

They showed footage of Paige going full-out heel last week. Just a side note, does anyone else think it’s trouble when WWE’s big sources of ad revenue in 2015 are the Payday candy bar, Rolaids and a mice exterminator?

Renee Young was with Becky Lynch. She said there was only one B in PCB and it was Paige. Maybe she meant brat or something. She can’t wait to get her hands on Paige. Brie interrupted, saying that she won’t get the chance to face her girlfriend because she’ll be the one winning, leaving her as the wacky side kick. Becky said better to be the wacky sidekick than Nikki’s doormat of a sister. OOOOOOOH!

Cesaro vs. The Miz

Cesaro looked good whenever he was in control while The Miz was, just The Miz. Cesaro broke out of the Skull Crushing Finale, gave Miz well over 20 reps with the giant swing then submitted him with the Sharpshooter.

Bray Wyatt came out and started talking about taking Undertaker and Kane’s souls. What does this mean? Well, he now has the ability to summon lightning and fire and pyro, just like Kane and The Undertaker. Spooky! Then a video aired of the Brothers of Destruction standing tall and looking good, only for the video end with a whirlpool effect as I guess Bray Wyatt sucked it away via his magical powers. This is so jarring compared to the rest of the show, but what can you do? Someone has a penchant for the horror time spooky madness in this company, and this segment was exactly that.

New WWE verbiage alert: The Lucha Dragons are “fun to watch”. It’s tough to get into these long matches when three out of the four guys in the ring are just okay. Kalisto did his cool comeback while Sin Cara took out Sheamus on the outside. Kalisto dodged the Bull Hammer and pinned Barrett with the Salida del Sol. Lucha Dragons are on the rise!

Also, considering what they do to people who win the King of the Ring (King Barrett) or the Money in the Bank briefcase (Sheamus) I’d never want to win either of those distinctions.

Zeb Colter was backstage when Jack Swagger appeared. Colter asked Swagger what’s it been, six, eight months? I thought he was talking about the last time he was on Raw. Anyway, Swagger mentioned that he’s not sure what’s going on here and doesn’t believe Colter’s intentions are real. Colter said he just wants to bring Mexico and America together. Alberto Del Rio then showed up and told Swagger to stay away from Coulter.

Alberto won quickly after placing Truth in the tree-of-woe position and hitting double foot stomp off the top rope. It seems clear now they’ve told him to not use the armbar anymore, but why?

They aired a highlight package from Survivor Series 2005 where it was Team Raw vs. Team Smackdown, with Orton getting a win for SmackDown after pinning Shawn Michaels with the RKO. If someone actually remembers this match from heart and not via Google, please let me know. You are a rare breed.

Seth Rollins was walking backstage when The New Day showed up, saying he was looking for partners, so how about them? Seth was fine with this, but they needed a third partner. So the New Day used their unicorn powers, and suddenly the Final Fantasy victory theme played and Xavier Woods was brought back from table purgatory. They then did their chant as Rollins walked away, confused.

JoJo interviewed Sasha Banks, mentioning she had to deliver tonight since for the last few weeks people have been chanting “We Want Sasha”. Sasha said well of course they want Sasha, look at me. She said she always delivers and tonight will be the same. She then walked away, not before making a crack at JoJo saying Halloween was on Saturday.

This four-way was a very good match that got a ton of time. There was some fluditity issues, mainly with Brie but overall this was worked well, especially towards the end with Becky and Sasha. Becky tried for the Disarmer but Sasha countered with a neckbreaker and hit the Bank Statement. Paige grabbed Sasha and threw her aside and pinned Becky after a Rampaige of her own.

Time for some 2014 Survivor Series highlights. You know, that big Survivor Series match where Sting arrived and helped Dolph Ziggler beat Seth Rollins and drove The Authority out of power, then disappearing for a month. Except in this highlight they didn’t even show Sting. I guess this week it has been demanded that Sting no longer exists in the WWE Universe. Someday I need to do an article comparing the world from 1984 to the WWE Universe as they have more in common than you think.

Renee interviews Charlotte. She congratulated Paige but can’t get over the narrative that she got the title because she’s Ric Flair’s daughter. At Survivor Series she’ll prove that this title was earned.

The New Day came out before their match to spread some cheer and positivity. Said that some of their favorite things are survivors, including their favorite band, TV show and Destiny’s Child song

. Hey, that is a good song, PLUS Survivor the band brought us Eye of the Tiger, which may or may not have existed in pro wrestling in the past:

They promised victory for team Rollins because New Day Rocks. Yes you do, fellas.

On a side note, I am totally considering voting New Day as my Tag Team of the Year in the Observer Awards. Ring of Honor’s reDragon and The Young Bucks are great and all, but no one is as entertaining as this act. If 2014 me was reading this paragraph right now they’d be flabbergasted, but this is the shootiest of shoots right now.

I tried to guess who was going to be on Roman’s team, and I almost got the team right — I just didn’t think The Usos would be back tonight.

Xavier started the match saying that he has this, then proceeded to not have it as he was immediately pinned after a superkick and splash by The Usos. Oops. Kofi Kingston was eliminated not too soon after that. Jey Uso went to the top rope but Big E cut him off and hit the Big Ending, eliminating him. Big E tags in Owens who takes out Jimmy with the Pop-Up Powerbomb.

We then got a long heat segment between Seth and Roman. Roman made the hot tag to Ryback who cleaned house. Big E went for the Big Ending again but Ryback countered and hit the Shell Shock to eliminate him. Rollins then pinned Ryback with the pedigree, leaving Reigns and Ambrose against Rollins and Owens. Owens dominated Ambrose until Rollins accidentally hit Owens, allowing Ambrose to come back with the Dirty Deeds DDT, eliminating him. That left Rollins to take on Ambrose and Reigns by himself. Rollins tried to escape and finally grabbed a chair to lay out both Ambrose and Rollins for the DQ.

Rollins was about to lay out Reigns when he came back with a Superman Punch and sent him reeling to the back as the show came to a close.

Final Thoughts: WWE Monday Night Raw doesn’t feel like a show with a lot of star power. With that said, it was a well booked, wrestling oriented show just like last week. The Wyatt stuff was what it was, but the Divas match was great and the main event was also fun — WWE typically delivers in ten man tags.

PLUG: This week on the Fire Pro Podcast, we talk about the history of the SmackDown series of video games. We start on the original Smackdown game, complete with amazing FMV entrance videos, all the way to WWE 2K15, which from what I hear people didn’t exactly enjoy. We then move on and talk about WWE 2K16 and answer questions (four, count ‘em, FOUR big ones) regarding the game. Is 2K16 a step in the right direction or just more nonsense? Find out by listening to our show here. 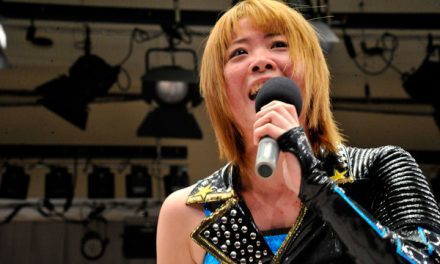 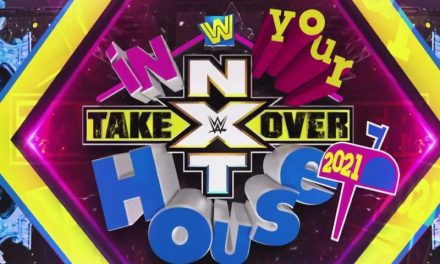 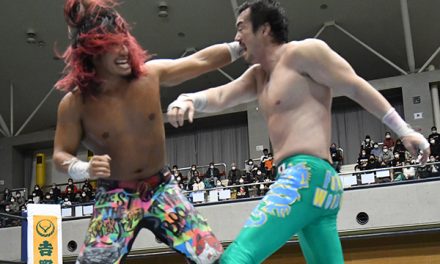