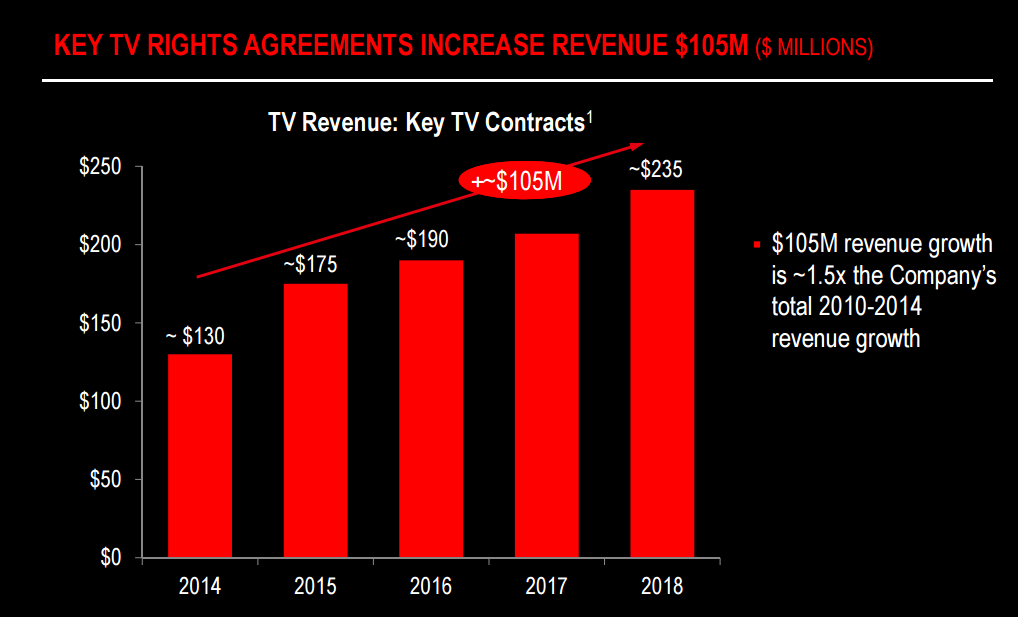 For all of 2014, WWE earned $176.7M in television rights (which was 91% growth over where the company was in 2007). After just three quarters of 2015, WWE is already at $175.5M. WWE’s built-in escalators in the television contracts guarantees that the key agreements will continue to deliver more and more revenue for new programming through 2018/2019.

Meanwhile, the WWE Network continues to be bound to the Royal Rumble through WrestleMania boom, Q2-Q4 malaise. WWE would need to be willing to give up some WWE Network autonomy and sell stake/control of the WWE Network (probably to a major media OTT conglomerate like NBCU or MLB AM) before they would be able to deliver constantly rising WWE Network revenue numbers.

With stalwarts such as ESPN are in the middle trimming $100 million from their budget, already the narrative is moving from the “live sports are the DVR-proof bubble in a cord-cutting world” to “the heyday of giant television rights contracts for live sports may be over”. What media eco-system does WWE face when it’s time to renegotiate multiyear centamillion contracts in just a few years?

Wall Street was not impressed

Prior to the earnings announcement, WWE was trading at $20/share. Since 10/29, $WWE has been trading at $17-$18/share. Investors seem frustrated that WWE projected flat WWE Network numbers for Q4 (though that shouldn’t really have been surprising), lower-than-expected cash flow ($4M-$8M is half of what Wall Street expected) and exceptionally vague 2016 guidance on the WWE Network.

“Regarding WWE Network, given the inherent uncertainty of this nascent and growing business, management will not provide guidance for 2016 subscriber levels.”

The WWE Network will launch in November in India and in Germany & Japan in January. WWE keeps insisting there are millions of households with a “WWE-affinity” and their service has the wherewithal to capture and retain millions of paid subscribers at the steady state. However, it will take some phenomenal growth (and retention) to move anywhere close to these lofty goals. Churn remains high (376,000 subscribers left the service in Q3’15 versus 453,000 subscriber additions) and doesn’t show any signs of slowing down. While WWE is running out of new markets for touting expansion, introducing new payment options (such as the 3-month prepaid cards at Walmart) may provide some important upside.

Rating Doom: ‘tis but a scratch!

While live ratings for Monday Night Raw have been in the doldrums in 2015 (reaching lowest levels since 1997), WWE is completely no-selling that they are concerned. When BTIG’s Brandon Ross asked about the rating slide (on both RAW and SmackDown), Chief Strategy and Financial Officer George Barrios just said that WWE doesn’t think about one metric in isolation like ratings but instead looks as other items such as “social media engagements” and that WWE believes they are “doing really, really well in the domestic pay-TV ecosystem compared to everyone else.”

As I discuss in my article at Wrestling Observer/Figure Four Online, there’s still a lot of people who care about ratings and television demographics including advertisers, NBCU and WWE themselves (since they need a new fanbase that will subscribe to the WWE Network, buy the superstar merchandise and attend the live events). The company’s story continues to be “win online, win at social media, win where the eyeballs are” and in time that will translate into money.

Is WWE Network going to be early Netflix? 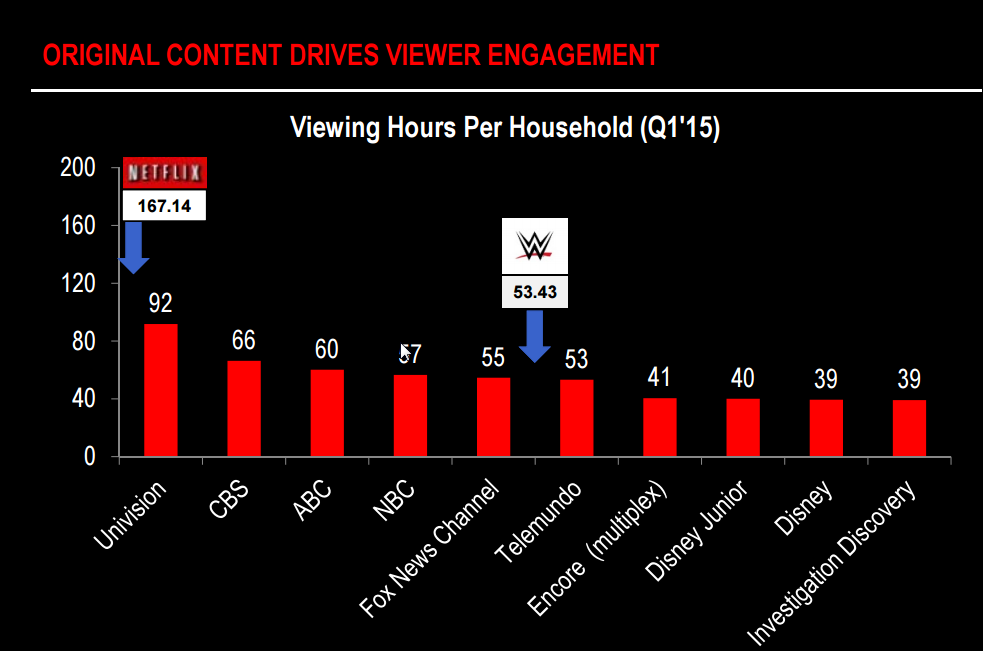 The limited guidance that WWE was willing to share for the WWE Network in 2016 was generalizing the domestic growth trends for Netflix’s streaming service (21.5% from Q3’10 to Q3’15). Netflix was mentioned eleven times during the conference call and Barrios is always quick to point out that WWE has been intently studying all subscription services (and not just video-on-demand players).

Despite WWE’s attempts to cage the language and prevent unrealistic expectations (what had burned WWE in 2014 with the TV negotiations hype), the tone of most analysts on the call was that WWE was being too conservative with their estimates for 2016 since their service is available both in the United States (with 80% of the subscriber base) and abroad. There was a brief time in 2014 when WWE even used the tagline, “It’s just like Netflix, but better”. At this point, the prospect of explosive growth seems murky. Until the company cuts down on concurrent streaming/account sharing and the prime programming is available immediately on the WWE Network, it will be tough for WWE to accelerate their paid subscriber growth into the Netflix stratosphere.

For the past year, expanding the WWE in India has been Barrios’ pet project. Already, the market has become the third-largest television rights deal. Starting today the WWE Network will be available in the Indian sub-continent marketplace (India, Pakistan, Bangladesh, Sri Lanka, Nepal, Bhutan, Maldives, and Afghanistan). However, pay-per-view programs will be blacked-out for the initial 24-hours, high price ($9.99 USD) and distribution technology (internet-connection required) suggests that adding India will hardly impact the overall WWE Network subscriber number at this time. However, launching the service does check a box on the “key objectives” list for 2015.

Now the story is going to be all about China. During the conference call, CFO Barrios talked about investing in China in 2016, re-evaluating their distribution strategy in the country and expanding their Shanghai office. There was specific talk about the latest Chinese five-year plan which included “a specific focus on sports and entertainment” along with an acknowledgement that there’s been a “tremendous amount of activity over the last 12 months” in the Chinese media marketplace. I have a feeling that we’ll be hearing a ton about the potential in China in 2016 from WWE. (Though exactly what WWE is doing and they are tracking against those plans will remain firmly in a cloud of mystery.)