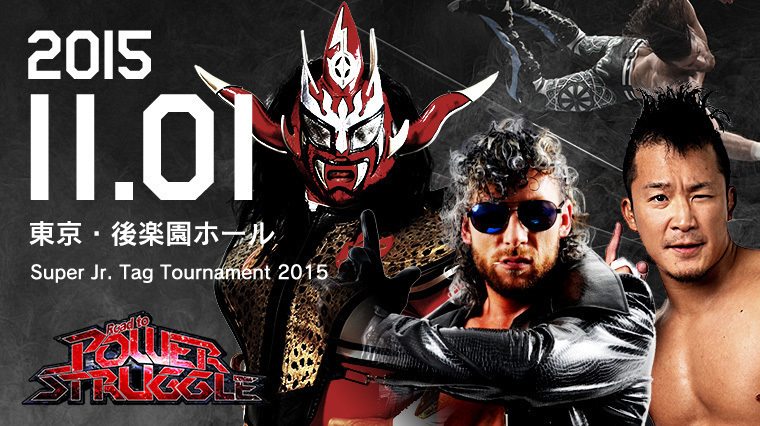 New Japan Pro Wrestling marched closer to November’s major Power Struggle show with Road to Power Struggle – Night 8, highlighted by the semifinals of the Super Junior Tag Tournament. The tournament has received much discussion among pro wrestling fans, especially in our community for the bold decision to eliminate all native Japanese wrestlers. The semifinals consist of four teams made up entirely of foreign (American) imports. The decision was met with much skepticism from the likes of Dave Meltzer who discussed the decision as well as New Japan’s less than stellar crowd reactions as of late in this week’s Wrestling Observer Newsletter.

My co-host Joe Lanza and I discussed the fallacies in Meltzer’s logic on this week’s episode of Voices of Wrestling, so I won’t go through that again but I will remind people that throughout the year New Japan has treated Korakuen Hall quite poorly, so tepid reactions to any match or any workers shouldn’t surprise anyone. Korakuen Hall attendees have simply had no reason to react to much all year.

This year, New Japan has given the Korakuen faithful 55 total singles matches, one single’s title match (NWA Junior Heavyweight Title at the New Year’s Dash show)—this includes a run of singles matches and shows through the 2015 G1 Climax. Korakuen has been treated to 92 tag matches (2v2 and multi-man) but exactly zero tag title matches (either Junior Heavyweight or Heavyweight). This lack of devotion to their most consistently ran building has caused attendance to fluctuate for the normally consistent location. Thankfully, for New Japan and the loyal Korakuen fans, the Super Junior Tag Tournament has been a consistent draw, selling out yet again tonight after an announced sellout for the 10/23 show. As you’ll see from the show recap, any narrative about the crowds not reacting to foreigner vs. foreigner matches can officially be thrown away. In fact, you could argue the gaijins were the most over acts throughout this entire show, far exceeding the reactions given to bigger stars who were slotting in meaningless mutli-man tags.

We say it often on this website, but if you’re skipping through these Young Lions openers to get to the meat of New Japan shows, you may want to rethink your decision. These four (Tanaka, Komatsu, White and Finlay) are arguably in the middle-of-the-pack as far as workers in this company right now: an insane thought given their ages and experience levels. While only about seven minutes, this match managed to pack a ton of stuff in while not seeming overly rushed. An interesting non-Young Lion interaction saw Jushin Thunder Liger almost act as a heel or at the very least a cowardly babyface as he continually avoided Tiger Mask, shying away from any direct interaction between the two.

The finish saw Komatsu with a nifty roll out of a Finlay suplex attempt into the Boston Crab. Don’t skip this one. ***

There was nothing inherently wrong about this six-man, it just lacked the same tenacity and fire as the opener. The bulk of the match saw Captain New Japan, not Juice Robinson, taking abuse from Dorada, Shibata and Goto. After a few minutes, Captain New Japan finally made a hot tag to Makabe who after only about a minute made his own “hot’ tag of sorts to Juice Robinson. I put hot in quotes because calling the reaction to Juice entering the fray tepid would be an understatement, it actually got quieter once he tagged in. To his credit, Juice showed some nice fire as he got into the ring, hit his series of punches and looked to have some steam. It was short-lived as Goto immediately took control back, locked Juice into his Shoryu Kekkai submission and picked up the victory  **1/4

After the match, Makabe and Shibata had to be pulled apart as they were brawling on the outside. Neither are listed for matches at Power Struggle, so perhaps we’re hinting towards a singles encounter between the two? Sounds good to me. Makabe has been a drag this entire year but a match with someone as dynamic as Shibata could really bring out the best in him.

A sleeper of sorts on this card, I didn’t make much of it looking at the announced card but there’s something to be said for the benefit of straight tag matches. These men weren’t bogged down by a bunch of extra bodies, guys that need to get into the ring and hit their signature spots or an obvious candidate to take the fall, instead this was given room to breath and each wrestler was able to shine. Chase Owens is starting to fit in nicely and throughout this match I began to hope Omega & Owens become a thing on the Junior Heavyweight Tag circuit. Of course, Omega needs to do a little bit of falling before that occurs (mainly lose the Junior Heavyweight Championship). Plus, I have higher hopes for Omega but this is a nice landing spot if everything goes south, they’d add some much needed depth to that division. The match itself was fast paced but never seemed to spotty and the interference of Bullet Club member Cody Hall was kept to a minimum and was actually used smartly as opposed to excessively. Add another solid match to this shows undercard. ***1/4

The story in this match focused solely on Karl Anderson and Shinsuke Nakamura who will main event the upcoming Power Struggle show. Anderson got the better of Nakamura this time nearly crippingly Swagsuke with a top-rope Gun Stun before finishing off YOSHI-HASHI with a standard, non-paralyzing one. Like most eight mans (especially those featuring Bullet Club members), the action never stopped but nothing felt like it happened. The pacing was solid but there’s such a malase when guys like Gallows and Fale are in the ring. This match featured a lot of Sakuraba who proceeded to kick the shit out of Gallows for a few minutes leading Anderson to say, “Jesus fucking christ!” at one point. Tonga lurked around the ring but didn’t do much significant and Yano just ran away any chance he could get. **1/4

More methodical than the previous multi-man matches on this card, CHAOS vs. Tanahashi, Taguchi and Honma featured large periods of one-on-one interactions as others were either laid out or fought on the outside. The big story throughout this match wasn’t Okada vs. Tanahashi—who are set to meet at January’s Wrestle Kingdom—but rather Honma and Ishii who’s encounter comes later this month at Power Struggle. The crowd popped huge whenever the two were in the ring together and there seemed to be some legit buzz for the match. When Okada and Tanahashi did interact it was kept short but important. Okada picked up a huge save for his team after Tanahashi locked Gedo in the Texas Cloverleaf—Gedo appeared ready to tap but at the very last minute Okada ran in and pummeled Tanahshi with a kick to the face. Again, they weren’t in the ring together long but when they were it was very important, in many cases turning the entire match around.

I’d be remiss if I didn’t mention Gedo was in fine form throughout this match being, well, Gedo. If you haven’t taken the time to appreciate Gedo, focus on him during one of these multi-mans. Watch how he sells, watch how he interacts with the others in the ring and how well he fits into almost any scenario and blends well with whomever he’s in the ring with. He’s not going to blow you away but you’d be hard pressed to find a more consistent, while at the same time non-featured performer than Gedo.

Okada rallied at the end, hit Taguchi with the Rainmaker and picked up the victory. Post-match saw Okada pointing at Tanahashi who was clutching his Wrestle Kingdom title shot briefcase. ***

We’re now at the semifinals of the Super Junior Tag Tournament, a much-maligned tournament by some circles of the wrestling world as New Japan’s annual Junior Tag showcase’s Final Four features exactly zero native Japanese workers. Don’t let that affect your enjoyment though, all four teams remaining excel at the style and all have built solid reputations in New Japan. Like the Nov 24th Road to Power Struggle show, Ricochet and Matt Sydal were over like crazy with the crowd chanting “RICOCHET! RICOCHET!” pretty much every time he wasn’t in the ring or actively doing something.

Though this match only went 12 minutes, it had everything you could want in a junior tag showcase. The Bucks being the whimsical fucks they always are, flips, dives, 450s, springboards, Ricochet taking a ton of abuse, a Matt Sydal hot tag and, if it’s your style, you also got a Cody Hall run-in and a ref bump. See, I wasn’t joking when I meant everything. Still with that frenetic pace, the match never got away from itself and stayed grounded as two teams battled for a coveted spot in the finals of the tournament. The babyfaces (Sydal & Ricochet) eventually picked up the win as Ricochet made a hot tag to Sydal who helped Ricochet clean house before the two hit dueling Shooting Star Presses for the win and a spot in the finals. A legitimately awesome match, well worth your time. The crowd exploded for the victory destroying any and all narratives that Japanese crowds couldn’t get into an all-gaijin Super Junior Tag semifinals. ****

There’s no way Roppongi Vice and reDRagon could follow up the previous Super Junior semifinal, right? Wrong. Not only did these duos follow up the previous match they exceeded it with one of the better New Japan junior heavyweight tag matches you’ll see all year. More focused than your standard tag, the match centered around reDRagon’s dismantling of Beretta’s knee. Both Fish and O’Reilly took turns toying with Beretta and doing everything in their power to destroy and take out the knee. One sequence saw Fish and O’Reilly trading tags as they applied single leg crabs—Fish focused on the right knee, O’Reilly on the left. Beretta never fully recovered and was largely a non-factor throughout this match and I mean that in a good way. There were attempts both from the top rope and flipping reversals but each time Beretta went down in a heap favoring the knee. Finally, Romero was able to get a tag and had to be the one to lead his team to victory. The closing stretch was as hot a New Japan crowd as you’ll hear with O’Reilly and Romero exchanging slaps and strikes before Romero got the better of him with a high knee. Romero then hit a suicide dive to O’Reilly on the outside, sending KOR into the 5th row and spilling a paper bag of groceries (seriously). With O’Reilly out, Roppongi Vice cornered Fish, hit the Strong Zero and won themselves a spot in the Super Junior Tag finals against Matt Sydal and Ricochet. ****1/4

Final Thoughts: Road to Power Struggle – Night 8 was as consistent a New Japan show as you’ll ever see. Don’t let the lack of commentary fool you, this was a well-rounded show with almost nothing bad and two or three very good matches. Don’t miss this one. 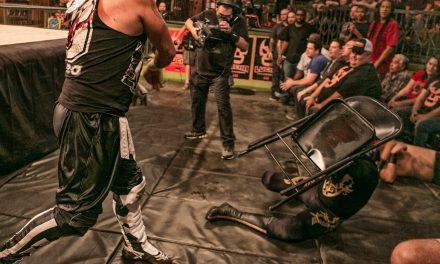 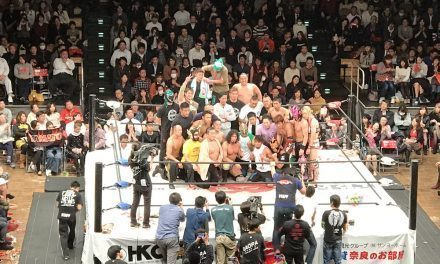