No Flair show this week.

“By the way, I did hear one of your podcasts where Wade Keller said he thought the boat had passed on me being a main event…and you actually stuck up for me, which I appreciate. Which…he is clueless if that’s what he thinks and he has no idea what this business is about.” – Ryback, apparently not a Torch subscriber

“Africa is a great place to say you’ve been.” – Shelton Benjamin on his travels

“I would have no issues working in an environment like that.” – Jim Ross, apparently lobbying for a gig with Lucha Underground

Talk n’ Shop #67 (10/24/15): Kevin Kelly joins Rocky and Karl on his first trip to Japan. He tells some great stories about working independent shows in Florida, being the “yay/boo” guy in a WCW tryout, bombing in his WWF tryout, meeting Vince McMahon, the challenges of calling New Japan, and rooming with the Honky Tonk Man in Puerto Rico. Kelly has his own podcast, so maybe he has told all those stories there, but they were new to me and a lot of fun. It’s a shame the show didn’t come out before King of Pro Wrestling, as Kelly comes off super-likeable and this may have deflected some of the negative reaction he received. THUMBS UP

The VIP Lounge #6 (10/25/15): MVP, Alice, and Alex are back to talk more random topics, including but not limited to: kids crying at the movies, a lengthy discussion on actors and movies (with a spoileriffic diatribe about Sicario), a spirited debate about the Hunger Games, independent workers, MVP’s possible return to New Japan, and how MVP does business in the ring. Not much of a show; a lot of the discussion just feels redundant and I was waiting for this one to end. THUMBS DOWN

MLW Radio #199 (10/26/15): The MLW flagship show is back in light of Alberto Del Rio (the current AAA Mega Champion) making his surprise return to the WWE. They talk about the situation, when Konnan knew about the move, and ADR’s future with the company. They also touch on Sin Cara leaving the company and the current state of AAA for a healthy dose of lucha talk. They also discuss that night’s Hell in a Cell show, some movie talk, and a strange but endearing discussion of Herve Villechaize. It’s a noteworthy show, but you do miss the MSL interaction. THUMBS UP

World of Corino (10/26/15): Corino’s show was advertised as being on the VIP portion of the MLW network, but this popped up in the free feed, possibly because of its notability. On the road back from Death Proof Wrestling, Corino reveals that he needs neck fusion surgery, and at his age his in-ring career is over. The portions about coming to grips with retirement and focusing on the importance of family make for a fascinating listen, and Corino remains optimistic throughout. Doing a solo recording is always a tough proposition, but Corino pulls it off. THUMBS UP

Steve Austin Show #269 (10/27/15): Steve sits down with The Ryback before the Hell in a Cell show. He talks about his workout philosophy, getting fired and rehired by WWE, The Secret (of course), politics in wrestling, his relationship with Vince McMahon, his goal to be the next John Cena, traveling solo, and more. Ryback also shit talks Wade Keller for comments about Ryback’s future as a main eventer, which was amusing, even more so when you remember he went out and had a crap match after this interview. Still, Ryback is an interesting fellow and this is an enjoyable show. THUMBS UP

The Ross Report #89 (10/27/15): Mike Johnson is back to discuss the Hell in a Cell show with JR. They fairly briefly run down the show, as well as the current situations for TNA, ROH, and Lucha Underground. The show is OK but there’s a reason the other podcasts have stopped devoting an entire show to reviewing the lesser PPV’s. No real scoops either, unless you count that Johnson disputes the “Vince McMahon freaked out over blood” story that’s been going around. Also, despite having a guest to discuss Hell in a Cell, Ross spends a part of the monologue discussing Hell in a Cell. <Johnson’s interview starts at 21:00> THUMBS IN THE MIDDLE

Talk is Jericho #190 (10/28/15): No time for shenanigans, as Jericho jumps right into an interview with Shelton Benjamin (Jericho dropping the monologues looks to be a trend, and a welcome one at that). Shelton talks about leaving the WWE, how he made his way over to Japan, life on the road in another country, the Taboo Tuesday match with Jericho, working with Kurt Angle, the famous class of wrestlers he was a part of in OVW, the Raw match with Shawn Michaels, and a lot more. I don’t know if people were clamoring for this show like Jericho said, but it is a very thorough and entertaining show with some great stories. <Benjamin’s interview starts at 3:09> THUMBS UP & BEST OF THE WEEK

Writer’s Room (10/28/15): I guess there just wasn’t enough MLW audio this week, as the usual VIP writer’s room popped up in the feed. Court and Alex Greenfield talk about Bob Orton in the WWE, Mickie James, terrible creative ideas for Chuck Palumbo, going out to eat at Whole Foods, feelings about leaving the WWE, smoking with Randy Orton, Alex getting into it with Brooklyn Brawler and Bruce Pritchard, the New Japan announcing situation, Gary Albright, and more. There are some really funny stories here, but also a lot of information you’ve heard on a myriad of other podcasts. And I can’t help but wonder: will these two be telling stories about their time in WWE creative in ten years? THUMBS IN THE MIDDLE

Bauer & Pollock (10/28/15): It’s signing day over at B&P, as the big news of the day is the Young Bucks signing with Ring of Honor and the WWE announcing 19 new arrivals at the Performance Center. They also discuss Breaking Ground, Stefan Struve, the return of Albert Del Rio, AAA’s talent woes, Hell in a Cell and the current WWE talent situation, Hulk Hogan’s WCW contract, the Jake Roberts documentary, WWE on ESPN, and more. Some good discussion and lack of lame humor makes this an easy listen. THUMBS UP

Art of Wrestling #274 (10/29/15): Former 3 Man Band member Jinder Mahal is the guest this week. He talks about having a famous uncle in wrestling, Canadian indies, being an inspiration to Indian kids, training with Bad News Allen and Rick Bogner, a funny story about trying a U-turn at the US/Canadian border, his WWE tryout and getting called up, and wrestling in India (Colt has, Jinder hasn’t). It’s an OK show, but listeners may be disappointed at the minimal WWE talk. Chris Hero also stops by in the intro to update the duo’s travels in Japan. THUMBS IN THE MIDDLE

Steve Austin – Unleashed #268 (10/29/15): Buff Bagwell is the guest for part 1 of a two part episode. They discuss his riches-to-rags childhood, his time as a massage therapist, amateur boxing, how Missy Hyatt got him into wrestling, the Handsome Stranger, his stripping days, divorcing his wife, meeting Austin in WCW, Jim Ross ruining his career, Tacoma, getting pranked, giving up 120K to start in WWE, beefing with 2 Cold Scorpio, and his upcoming documentary. Buff is very open and I’m interested in part 2. THUMBS UP

The Jim Cornette Experience #100 (10/29/15): Jim and Alice hit their centennial and celebrate by talking to Jeff Jarrett. Of course, they start by discussing Global Force Wrestling and its current status. No real news, but you do get to hear Jim say that social media is exploding. Then they finally get down to discussing classic Memphis wrestling, but it’s just a brief talk about Jerry Lawler and Jarrett’s start in the business. It’s a genial enough conversation but not nearly as great as it could be. <Jarrett’s interview starts at 25:14>>THUMBS IN THE MIDDLE

Talk is Jericho #189 (10/23/15): Jericho chats with paranormal investigator Amy Bruni for his second Halloween episode (actually taped a few months back, but you get the idea). She talks about her supernatural experiences, being on Ghost Hunters, her skeptic boyfriend, working with the Miz, having a ghost follow her home, and her business planning trips around the supernatural. Kofi Kingston also drops by to talk about his experiences on the show. It’s an OK show if you need something to listen to on Halloween. <Buni’s interview starts at 4:24, Kingston’s starts at 1:02:33>THUMBS IN THE MIDDLE

MSL & Sullivan Show #5 (10/30/15): MSL and Sullivan return to discuss the Dungeon of Doom, Block blading at Hell in a Cell, booking Roman Reigns, Ronda Rousey being a heel, how Kevin Sullivan celebrates Halloween, Dave Sullivan, Hogan’s contract, and more. Then they get into the 7/29/96 Nitro (the famous episode where Rey gets lawndarted) which turns into a digression on an angle with Doug Furnas. A fun mailbag concerning Chris Colt and Curtis Iaukea rounds out another solid episode. THUMBS UP 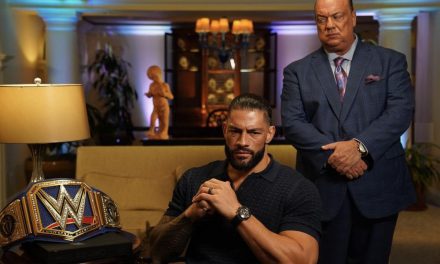