This might be it, folks. Tyler Breeze may very well be having his WWE NXT swan song. Given that Prince Pretty has debuted on the main roster and is already slated for a program with Dolph Ziggler, tonight’s main event against Samoa Joe may very well be Breeze’s last act in NXT.

Byron Saxton opened this match with a decent observation for once. Shazza was apparently Emma’s final opponent on the indies before coming to WWE. It was the kind of factoid that creates a larger pro wrestling universe missing from the main roster and often NXT. Just adds more fun.

Emma put the boots to Shazza and the announcers spent the whole match talking about how this match was preparation for her inevitable encounter with Asuka. And this was definitely a different, more vicious side of Emma. She’s finally buying into the heel character we saw shades of at Takeover: Brooklyn. Emma won with the Emma Lock, minus the pelvic thrusts.

It looks like the James Storm debut last week wasn’t a one-off. After a highlight reel from last week Storm cuts a promo about how excited he was to be in NXT. I haven’t seen Storm in awhile before last week – I don’t watch a lot of TNA these days, but Storm was energized and seemed genuinely happy to be in WWE-at-large. After a quick commercial we get the announcement that Apollo Crews will get his title shot against Finn Balor on next week’s episode. I initially thought that they would hold it off for the next Takeover, but alas, we’ll get what should be a spectacular title match next week.

Jason Jordan and Chad Gable are as over as anyone in NXT. The Full Sail University crowd loves singing “Gable” to the tune of Kurt Angle’s old theme; they even threw in Jordan’s name for good measure. The road to Jordan and Gable vs. Dash and Dawson is going to be a ton of fun, tag titles be damned.

As for this match, however, it was great. Gable and Johnny Gargano are spectacular in the ring together. I will spare you the move-by-move, but all four guys rose to the occasion and Full Sail’s “this is awesome” chant was finally directed at a worthy cause on the weekly show.

You know that we wage wars against mid-match commercials during NXT on this review, but I wasn’t even mad when a commercial destroyed the momentum of the match; I was so surprised by how fun this was I appreciated 30 seconds to catch my breath. And to top it all off, for once the match didn’t end within a minute of returning from commercial.

Always say #ThankYou to your tag partner … it's the polite thing to do! @JasonJordanJJ @WWEGable #WWENXT pic.twitter.com/8mV3abPlpu

Gable spent the better part of 10 minutes holding his own against both Gargano and Ciampa before he got to Jordan who had a Titus O’Neill-level hot tag, strap removal and all. Jordan lost the momentum on the hot tag, though, and got his own back and forth. Jordan tags in Gable for the Grand Amplitude after a series of close calls.

I don’t star-rate matches on the weekly NXT show, but this was a legitimate four-star barnburner and it came out of nowhere. Go watch this match. Now. Eva Marie treats us with another digital postcard from outside the Moulin Rouge. She’s coming back soon, apparently. I don’t know if that’s necessary, but I bet it’s happening.

Poor Kay Lee Ray. Nia Jax is a force and she has much better ring gear than her blue number from a couple of weeks ago. The announce team has already pulled the “she’s The Rock’s cousin” card from the deck, but didn’t mention Roman Reigns. Jax is big, talented and surprisingly agile, but the most exciting part about her is that she IS different than the rest of the women’s division in both NXT and the main roster. She could be half as talented and still be exciting just because she’s different. And given the size of the rest of the women she’s wrestling, her spinebuster finisher looks particularly devastating. My only critique would be to cut the cliched “crazy person” smile from her repertoire, especially when she’s going for a pin.

"She just spiked her so hard, I expected an endzone dance!" – @WWEGraves on @NiaJaxWWE #WWENXT pic.twitter.com/8sGxFnLfo8

Enzo and Cass vs. Dash and Dawson

Actually, not really. Dash and Dawson attack Enzo and Cass during their entrance, robbing us of Enzo’s jawing. Interrupting Enzo’s mic time might be the biggest heel move you can do in NXT, so nice job by them. Dash and Dawson singled out Cass this time and attacked his leg. They were apparently effective enough, including a stomp to his knee from the middle rope, to require the Performance Center doctor’s assistance. After the beat down, Alexa Bliss lays down the challenge for a 6-person tag team match between Bliss, Blake and Murphy and Bayley with two people of her choosing. Bliss insinuates it’ll be a challenge for Bayley to find two “losers” who want to tag with her. Who would want to tag with the NXT Women’s champion, right?

Part two of the Apollo Crews feature that started last week takes us through his debut starting at Takeover: Brooklyn on his birthday and up to his motivations going into next week’s NXT (Men’s) Championship match. Another good segment, not as good as last week’s, but a solid video package. We could definitely use character development like this on RAW from time to time, but we’ll just stick to 20 minute Authority segments.

I mean, this is what we came to this episode for, but if this match delivers we’re looking at one of the best hours of NXT we’ve ever seen. The tag team match earlier on put it in that echelon and really built anticipation for what these two might do to follow up. Got a commercial coming early in the match this time, right after a suicide dive from Joe. At least it was early on. Joe bumped really heavily and sold his ass off for Breeze in this match and made Breeze look like a more serious threat than he’s been in months. If this is in fact Breeze’s last NXT match, he’s looking like a main roster talent on his way out. Joe’s stint in NXT has been brilliant for him. He’s rolling into form – pun fully intended – and seems way more engaged in his work than he did in his fist couple of appearances. Even after a couple of extended beat down segments for both guys, it felt like they rushed into the closing stretch. Breeze rolled out of a Muscle Buster for a near fall, hit a Super(model) Kick for a near fall and tried an O’Connor Roll to get the win, but Joe countered it into the Coquina Clutch for the submission victory.

After the match Finn Balor cuts a really good promo about next week’s match and says that someday Apollo Crews will be a great NXT (Men’s) champion, but that day is not next week. By the way, we’ve seen both the NXT singles title holders for a combined 5 minutes and they’ve been absolutely exceptional hours of TV. Only in NXT.

Should You Watch This Episode?

Abso-freaking-lutely. NXT went the full hour for the first time in months and had what would’ve been the best match by a mile in any WWE week that didn’t include that bonkers fatal four-way from RAW. Fatal four-way or not, you need to watch the Jordan and Gable vs. Gargano and Ciampa tag team match and stick around for Breeze vs. Joe. 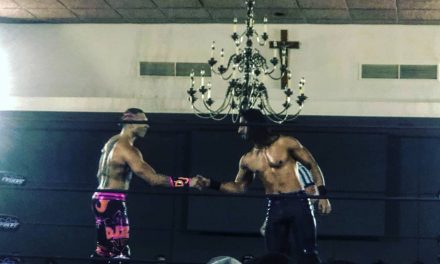 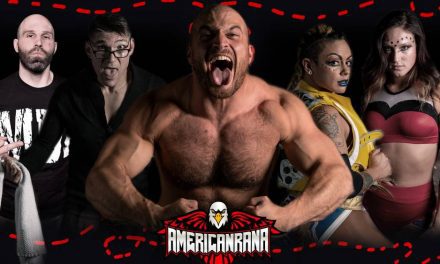