This is a Korakuen Hall show, with no commentary on NJ World: but multi-cam, presumably because ambitiously sweeping camera angles and artful cuts are essential to capture the scope of the NJPW Juniors Division in their first round Junior Tag League matches. Excitingly, NJPW have removed their usual barrier fence around the ring used to separate the crowd from the action; to allow, if Bing translate is doing justice here: “Junior warrior to fly freely.”

The Young Lions are getting to tangle with some credible heavyweights for a refreshing change, and Captain New Japan being shafted at the last minute (due to Finlay’s ankle injury) makes the team of Meiyu Sweets a lot more impressive foes.

Shibata starts off by wrapping White in a brutally tight headlock: but when, gasping, he desperately struggles free, Shibata instantly lands a figure four on him, followed by ugly, unforgiving strikes. This whole early sequence is spookily reminiscent of Suzuki’s match with Tanaka in last year’s Road To Power Struggle, which I watched between parted fingers, because it was too compellingly brutal to look directly.

Next, Yohei attempts to face off against Makabe in a delicious mismatch of styles which comes off worse for the young man, his incredible corkscrew forearm scuppered by Makabe’s strength and size. Then Goto attempts a half crab, every Lion’s calling card, on Tanaka, which he eventually struggles to power out of, clutching his back in agony and face contorted with pain.

The Young Lions come across as out-powered and out-classed here, but full of the sort of bravery and resilience that you can’t help but love. As much as the smug swagger of your charismatic main eventers is great, there’s a particular pleasure in someone who has to prove themselves at every opportunity, and rises to the challenge admirably.

When Jay finally faces Shibata again in the closing stretch, he seems determined not to make the same mistakes. Despite everything, Shibata nails White with an insulting and deadly double crab, which leaves White visibly shaken and trembling after the match.

A much less frivolous opener than we’ve come to expect from these shows. As rumours explode over potential excursion destinations for this cohort of Lions, I find myself even more rapt by every second of these tags, knowing that there may be a finite number of them left. ***½

This match is barely started before the action drifts out of the ring: with Anderson choking Nakamura with his jacket at ringside. The announcer has a particularly anxious tone to his urgent warning to fans to move away, being that there’s no barrier between the Pumpkin-Club clad fans in the front row and the choking action merely inches away.

When the teams finally get organised, Sakuraba and Gallows face off in an uninspiring interaction that doesn’t play to either man’s strengths (what are Gallows’ strengths? Tweet me. I’ve got nothing). Quickly enough things disintegrate again, and the wrestlers brawl up into the tiered seating, while the camera struggles to keep track of all the different partners fighting in different places.

At one point, Anderson takes custody of Nakamura’s jacket, and does a taunting strut with “YEAOH” shout, which makes Nakamura look more worried and stressed than any wrestling move that occurs in this match.

This has the chaotic mess of a Junior tag match, but without the high energy, impressive wrestling required to back it up or keep it interesting. It doesn’t have a thread running through it, and only makes the tension between Anderson and Nakamura look childish and petty rather than worthy of a championship match. *1/4

If the Young Lions in the opener seem humble, hardworking, and hungry for every chance to prove themselves; Juice Robinson is the antithesis of that. Maybe I’m projecting, but Robinson’s team look sick of him already, just walking to the ring. He can’t seem to manage four paces without yelling something obnoxious or just being generally unlovable.

This match doesn’t have nearly the pizzaz it ought to considering it encapsulates our Wrestle Kingdom main event, but I feel like it could have been a fun, solid, tag, if Robinson wasn’t allowed to dominate large sections of it with ill-advised comedy, silly faces, and ridiculous offence.

When Ishii finally lariats Juice’s head off, I should sigh with relief, but the match still struggles to gain momentum. Even the segments between Ishii and Honma feel a little stale and lacking in energy. It drags on and on, Okada puts Red Ink on Tanahashi in the most bored, unmotivated way possible, and then hits a rather lacklustre Rainmaker on Juice Robinson. *1/4

Some respectful handshakes open this match, which is becoming of the Tiger/Liger team because it’s clear they’re not going to come off best here.

This match has an interminably long Liger/Fish segment that has the crowd bursting into uncontrollable “Tiger” chants, but when he finally does get in, they lose attention rapidly, and it’s a bit of an underwhelming hot tag. Both teams hold their own at various stages here, and when reDRagon start using their trusty tag-team combos it’s very enjoyable, but just not particularly original or memorable.

I’m unsure of the offensive impact of Liger slapping his own thigh while Fish is between his legs in a headlock; but he’s the veteran and I’m sure he knows what he’s doing. However, I am keen on how Fish uses Liger’s horns for leverage to lock in submissions, tearing back on them.

This is nowhere near as good as reDRagon’s excellent, thrilling match with Time Splitters in Kobe, but adequate to kick off the tournament action without leaving us fatigued.

Chasing the Dragon finishes off the big cats. More handshakes (and hugs)! **1/2

Romero emerges here in a Roppongi Vice tiger mask, yellow and black to match their gear. and with one eye patched over (#bestdressed, all of the #bestdressed). He’s busted out a couple of these in tribute to his Black Tiger days since teaming with Beretta, but this is my favourite yet.

The first few minutes of this match feature a 19-count tease, Owens hitting a package piledriver on the ring apron, and the spot I’d anticipated ever since seeing the lack of barricades: an Omega diving Cannonball on to both of RPG Vice and pretty much the whole entire first six rows of crowd. Kenny’s far too nice for the Bullet Club, and after diving on to the mass of front-row enthusiasts he insists on surreptitiously patting them to check if they’re ok, and too-sweeting anyone who’ll accept.

Despite this high-octane beginning, the match slows down from here out, and there’s too much pacing themselves for my taste: segments of unnecessary holds. The match is also a little heavy on trash-can involvement, and I’m irked it’s become Omega’s motif. A man so skilled in the ring doesn’t need the equivalent of Yano’s red chair. No matter how much he inventively incorporates it (and RPG Vice creatively reverse it), it still feels cheap.

For the most part, Chase Owens may as well not even be here; and I don’t think he delivers on this paramount chance to impress. His individual moves are executed competently but he lacks smooth transitions, ways of moving in the ring that feel convincing and fluid. A Strong Zero finishes him off. **3/4

The former of these tag teams presumably bonded over both suffering humiliating defeats to Kenny Omega in early 2015. All those eight-man openers seem to have granted Taguchi and Dorada some time to make a reasonable friendship though, as they seem to be on the same page here, and feel like a cohesive tag team. Taguchi has a pumpkin balaclava; what it lacks in style or subtlety, it makes up for in sheer seasonal relevance.

Who decides who gets to ride Cody Hall to the ring? It’s Nick here, but is there a rota? Do they flip a coin for it? Or does Matt just prefer to keep his Superkicking-legs limber by getting the warm-up pre-match walk? Nick is also the one who gets thrown into Hall’s arms in this match, and then carried, bridal-style, around the ring, to be gently deposited back on to the ring apron– so maybe they just have a closer relationship.

This match has delightful synchronicity, which you’d expect from the Bucks, but is especially joyful when it comes in the form of double topes from Dorada/Taguchi. There’s also a really fun spot where Taguchi, after some comical struggle, impressively DDTs both Bucks to uproarious crowd reaction. We’re used to Taguchi being an annoying afterthought in tag matches featuring feuds between fan-favourites– and it’s easy to forget that when he’s in a match that’s actually about him, he can be good at what he does.

The Young Bucks get the inevitable Meltzer Driver win on Dorada, but it’s by no means a squash. ***

Sydal almost has something of the irritating arrogant foreigner here, but is instantly forgiven because he’s actually good. Opening handshakes lead to a moment of tension between Sydal and Shelley, where their palms linger just a little too long, and the eye contact is meaningful.

The chemistry between Sydal and Shelley in the initial mat-based portion of this match isn’t necessarily obvious: they seem awkward together, clumsily knocking limbs, and struggling to slide through into transitions. There’s an extended feeling-out process here, and I can’t help but just wish for immediate flurries, dives, and dramatic high-flying,

Time Splitters display stellar teamwork by simultaneously skilfully working opposite arms of Ricochet — which is slightly spoilt by his terrifying and unconvincing yelp-wailing — but the arm work doesn’t go anywhere, and doesn’t relate to the rest of the match in even the most tangential way.

I expected a masterpiece of high spots, but in reality it’s weirdly-paced: and while the skill of the men involved is undeniable, they don’t seem to be performing at their usual standard. When the Junior warriors finally do fly free, it feels like there’s too much stopping and starting, and slowing down. The spots of drama, like when Time Splitters execute their tag-team finishers, are undermined by the lack of reaction and impact on the following stretches of match.

Overall, it feels like a few minutes could have been easily removed from this match, and the action condensed: which would have improved the encounter. Double Shooting Stars and concurrent pins indicate the Sydal/Ricochet victory; an emphatic but unforeshadowed win. **½

This result makes makes McCarron 4/4 on his predictions, and also gives us all-gaikokujin semi-finals.

Final Thoughts: The undercard was egregiously weak, apart from the opener. The tournament matches felt like they overstayed their welcome and didn’t deliver on the promise of fast-paced drama that we’ve come to expect from the high-quality of Junior wrestlers in NJPW. Hopefully the semi-finals pick up the action somewhat and we get to see what the division is really capable of. Why oh why couldn’t they have slotted the Young Lions in the tournament somewhere…?

So Maybe It’s A Multiverse 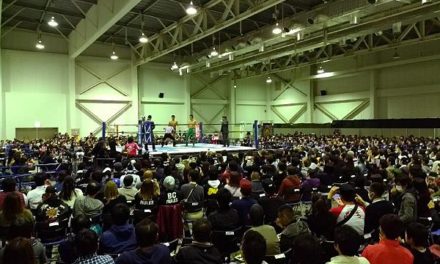