After causing pulses to quicken when Rollins was pushed into a main event for an impromptu Shield reunion on Monday, not a whisper is spoken about this here. I’ve spoken at length about SmackDown’s problem with tedious, stale booking – but to blow an exciting re-enactment of a popular match, and reunite one of WWE’s most beloved stables, with no advertising or build, seems even more mind-boggling. I digress- there’s a reason I’m not The Raw Guy.

“It could be your last SmackDown as WWE Champion…”

Perhaps most confusingly for a go-home show, Rollins only has the fleetingest of interactions with Kane, at the beginning of the show, backstage. Kane flexes his Director of Operations muscles for maybe the last time, as he administratively forces Rollins to open the show, and implies that feigning an injury again would be a very unwise decision. Rollins does a champion (yes) job of pretending to be rattled by Kane’s best scary demon voice, which is nice.

“We are supposed to be three unicorns, standing together, spreading magic!”

Kane is an enthusiastic New Day fan this week, which makes it a total of thrice he’s switched opinion on them since they debuted on SmackDown alone. The New Day are bereft though, because their dear boy Xavier is still suffering the ill-effects of being tabled on Monday. Kane attempts to cheer them up with a combination of alliteration and trombone-miming, but then settles for booking them in a main event against Ambrose and Reigns. Remember when the Shield used to be the mythical horses of WWE?

I’m considering this a passing of the torch moment.

I genuinely rubbed my hands together with glee when I saw this match was on the docket for Thursday — even though it was an obvious transparent effort to give the champ an afterthought of an emphatic win; to make him look slightly more credible than his previous win-loss record would indicate, going into Sunday. None of the booking cynicism in the world can spoil my two WWE faves going face-to-face. A big personal thank you to Kane for revenge-booking a decent opener for a change.

I love showboaty playful Cesaro, who can now finally combine his crowd-pleasing charisma with his strength and talent for immensely fun opening stretches. Rollins plays off him perfectly, being bratty and stomping off in a frustrated huff with his belt at the first taste of humiliation. Rollins has second thoughts though, and in an uncharacteristic moment of dignity, heads back to the ring, only to be met by a succession of Cesaro’s gloriously theatrical turnbuckle uppercuts.

The Stardust Section are here again, enjoying the match pleasantly and not interfering for the second week running. I’m not sure what I love more, Viktor just having a whale of a time enjoying the match in full Wastelander gear, or Konnor with his index-card sized sign. If their gimmick is now just “front-row eccentrics”, then they’re rockin’ it.

No one wriggles more convincingly from Cesaro Swing attempts (apart from Sami Zayn) than Rollins, and the very desperation, clawing and struggling that goes on from the champ makes Cesaro seem like a more than legitimate opponent. There are too many good spots in this brief match to mention: a particular highlight being when Rollins gets cocky and tries for his own uppercut in the corner (complete with arm-cannons taunt), only to get floored by an impossibly high dropkick. Then later, Cesaro has Rollins in a crossface, but as Rollins is about to reach for the ropes, he rolls them both 360 degrees horizontally so they’re back in the middle of the ring, crossface still locked in. Please watch this match, it’s a joyful thing.

Rollins gets a clean win with the Pedigree, in a zero-momentum finish, because some things never change.

I’ve appreciated the ring announcers matching their outfits to the middle rope throughout October, but nobody’s really nailed it until Eden, tonight. She’s wearing a coral-pink figure-hugging sleeveless dress, and….

I’m just kidding. Best Dressed is Tyler Breeze. It’s always Tyler Breeze, it will be as long as he sticks around. I may as well not even bother mentioning it from here on out.

“There’s a lot of accusations being hurled around..”

I follow WWE, probably it’s fair to say, more than casually: and watch SmackDown with a positively Sherlockian attitude, yet am still completely confused by Paige and what’s going on in her head these last few weeks. She ditched PCB; she snuggled up to Nattie; she asked to rejoin PCB; she beat Nattie up in a locker room; and now she’s come out to deny it. None of this sequence of events makes any logical sense and it feels like her character has been written by a different author not just from week-to-week, but segment-to-segment within shows. Her ostensible motivations change more frequently than her accent does within a sentence: and that’s saying something.

Charlotte and Becky humour her by hearing Paige out: that she didn’t attack Natalya; that she didn’t mean all those things she said about Charlotte being champion because of nepotism and Lynch being irrelevant. They call her out for being insincere — Charlotte even gets a catch in her voice when she says “You don’t respect me…” — but I’m finding it really hard to connect with any of this while weird, mercurial Paige is the epicentre of it.

Talking of empathy vacuums of characters, the Bella clan interrupt and this leads into…

This starts off as a refreshingly physical match, with lots of satisfying slams and throws, and the emphasis on Nikki showing off to Charlotte who is watching, unimpressed, from ringside. It doesn’t seem to flow particularly well as it goes on, though, feeling like a lot of disparate moves done in order, rather than an organically developing wrestling match. It’s fine, it’s functional, it’s just not got any sort of pizzaz. Nikki gets the win the the Rack Attack.

Generous ex-boyfriend Ziggler is here to say that “Lana is a grown woman and she can do what she likes,” bouncing back from rejection much like he would bump enthusiastically from a particularly stiff lariat. Summer Rae comes out to add that everything’s all cool too—she’s found a new man, in fact—and let’s cut to the chase…

A few questions and thoughts before I just bask in the pure pleasure of Prince Pretty joining us: why would the world’s most gorgeous man be only Rae’s fourth choice for a boyfriend? Why can’t two narcissists with a common goal have an awesome platonic friendship? It’s unsurprising that WWE writers can’t think of a reason why a man and a woman would want to have a partnership based on anything other than romantic attraction, but always disappointing regardless: because there are a wealth of nuanced and complicated reasons why people align themselves together other than just “wanting to bang”. Tyler snubbed even upsettingly beautiful Alexa Bliss when she dared to be in the background of one of his selfies, and never seemed to really grasp the concept of empathy or attraction for anyone else. He’s never expressed an interest in either gender before. This is out of character for Breezey.

Also, why is Summer Rae describing Tyler as a “real man” when his own merchandise describes him as merely “part man”?

So, yes the King of Cuteville is here, throwing some well-deserved zingers at Ziggler’s fashion sense, and claiming that he and Rae are going to give WWE a “facelift”. Ziggler throws a weirdly forced jab about “lazy millennials”, and Breeze goes wild, launching selfie-stick-assisted offence and unleashing a barrage of fists on Dolph in a flurry of fur and feathers. An decisive Beauty Shot ends the scene, and Rae and Breeze take a triumphant victory selfie.

The misplaced European midcarders have all clung together lately, and admittedly, they do seem to have a nice little thing going already. This is a sub- five minute match, and it succeeds in making the European team look like strong, brawling, brutes, compared to the more genteel twirling of the Dragons. At one point Barrett throws his kneecap into the midsection of Sin Cara draped across the top rope with such ferocity that I imagined I heard several ribs cracking clear in half. Rusev smugly sauntering around ringside leaves a window for opportunistic kicks and retaliatory dives. A really fun match, Sheamus gets the pin on Sin Cara.

I’m not sure if I’m just in a particularly good mood this week— or I’m flushed with the excitement of seeing my favourite Sultan of Selfies here on my home-brand— but when Bo Dallas comes out to proudly accept Cena’s open challenge at Hell In A Cell, I had a proper undignified snort-giggling fit that lasted longer than I care to admit. This was exacerbated when Dallas continues to refer to the crowd as “Bo-mericans”.

Ryback’s pink singlet RULES, but I’m afraid it’s a tough week for fashion competition so it’s not a two-week streak for the Big Guy. This is a squash, as you’d expect, and Ryback wins with Shellshocked.

Roman Reigns and Dean Ambrose vs The New Day

28 straight weeks of at least one ex-Shield member in the main event of SmackDown.

Kofi and E are wearing Xavier Woods tribute armbands, tragically, and the man’s presence is definitely missed. At this point, Reigns’ habit of selling as if he’s legally dead for the first portion of the match, only to zoom into super-powered hot-tag mode when the situation calls for it, is getting a little tired. Here he crumples into a pile of laundry at ringside from a few simple hits from the New Day, descending into half-lidded despair and desperate clutching at all of his body at once. You can’t spend all of your time designing Reigns to look strong and powerful and resilient and then make it believable that he also seems to experience pain 100x more intensely than an ordinary person as well.

Luckily, Ambrose is emotionally unscathed from the experience of re-living another bout of Rollins rejection on Monday, and pulls some great dynamic sequences from Kingston while Reigns is AWOL. Of course, you know the routine by now: Reigns gets tagged in, suddenly has the fortitude of ten bears, and wrecks everyone in turn. One particularly nasty spot sees him throw a dropkick at Kofi at ringside which makes Reigns land flat on his own back on the commentary table (with monitors still intact). Good job he’s got that vest on.

Before too long, The New Day just stomp off, knowing that they’re not going to win against powered-up Comeback Mode Roman, but the Dudleys are waiting behind the Tron to usher them back into the mayhem. The whole thing descends into a mess of a… well, a typical SmackDown main event. It is a fun sort of chaos, though, and delays the inevitable Spear victory for a further few minutes.

Final Thoughts: A go-home show with almost zero interaction between any of the feuds going into Hell in a Cell seems like an odd decision— but it was such a refreshing and enjoyable show I barely minded. The introduction of Tyler Breeze was a welcome shake-up, and I’m excited to see how this develops. A well above-average show that I would definitely recommend! 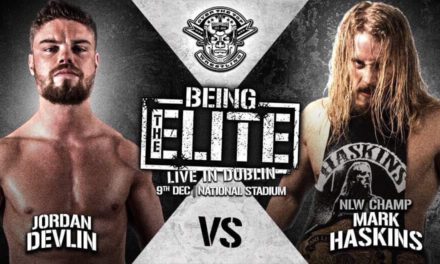