Get excited; NXT is buzzing once again. You could feel it picking up steam when Takeover: Brooklyn sold out the Barclays Center. You could sense that the roster was taking shape once again when Tommaso Ciampa and Johnny Gargano became regular players. You could tell that storylines gained momentum starting in the women’s division when Bayley vanquished Sasha Banks and Asuka debuted to start her inevitably trek to meet Bayley. We can feel it now as NXT expands it’s reach to include some sort of promotional relationship with EVOLVE, the extent of which is still unknown.

Asuka, to the surprise of probably no one, laid the boots to Billy Kay, but Kay wasn’t just enhancement talent here. Kay actually had control early in the match.

More good news for Billy Kay: she’s graduated to having a character now. She’s apparently going to be cocky and… have long legs? That’s a gimmick, I guess. Go for it. Plenty of knee-high boots and corner foot chokes to go around, I suppose.

Also, before we move on, is “cocky” a term also used for women? Is there another term I’m missing? I’ve never heard “cocky” used to describe a woman before, and yes, I see the reason why.

Asuka makes Kay tap out with the Asuka Lock.

This wasn’t so much a match as an extended angle, as sometimes happens on NXT. Enzo was getting whooped up on, as per usual, but scored a rollup on Scott Dawson to steal a win. Both Dash and Dawson put a beat down on Enzo and Big Cass after the match. They even got Cass up for the largest Shatter Machine to date. The beat down actually felt pretty definitive. I don’t think this is going to be a continuing feud, but we shall see. After the “match,” the NXT commentary team led into a promo video for tonight’s main event: Rhyno vs. Baron Corbin. It seemed like a pretty good promo video, but my WWE Network feed jumped ahead after about 2 minutes to Danny Birch’s entrance.

There was a long entrance music lead-in before James Storm came out, and the Full Sail University crowd properly exploded for him, including a “you belong here” chant. The excitement was just as much a product of the stigma surrounding TNA guys’ possibilities in WWE/NXT as it was a product of Storm’s considerable star power.

Storm looked good, energized even. He finished Birch off with the Eight Second Ride.

An Apollo Crews feature, similar to the Finn Balor features leading into Takeover: Brooklyn, followed the match. It was a great look into Crews’ past including EVOLVE clips from Crews’ Uhaa Nation days on the indies. Part two of the Crews feature is coming next week.

Peyton Royce gets a gimmick now too! She’s a flower child which, admittedly, is more of a gimmick than long legs are. For better or worse, Royce and Billy Kay are going to be linked through their journeys through at least NXT if not their entire WWE careers. Thankfully for Alexa Bliss, her wrestling is infinitely better than her hair extensions. Sorry, treading perilously close to Ru’s Fashion Corner. The coming matches between Bliss and Bayley are going to be really, really fun. Bliss wins the match with a Bliss Flip-Sparkle Splash combo and cuts a somewhat-grating (but heel-grating, not Dana-Brooke-grating) promo on Bayley.

Your Main Event of @WWENXT is NOW on @WWENetwork! @BaronCorbinWWE  vs. @Rhyno313! #ManBeast #LoneWolf pic.twitter.com/AmT1UIx5K9

Question for those who have been to Full Sail: is the screaming woman during Baron Corbin’s entrance a WWE add-in or is there someone who comes to every taping and screeches every time Corbin comes to the ring?

These two have great chemistry. Rhyno clearly brings something out of Corbin that only Samoa Joe has been able to so far and Rhyno’s veteran savvy pays dividends in matches like these. Rhyno does all of the little things right. A lot of the main roster will wait for the referee’s count to get to 8.5 before suddenly having all of the energy to sprint back to the ring at 9.999; Rhyno takes his time getting up, but he starts stirring at 7 and lumbers to the apron before rolling in with what seems like a Herculean effort. Unless, of course, that’s actually how slowly he moves. Could be, but it works.

Rhyno hit the Gore in the middle of this hoss fight and, well, Baron Corbin kicked out of the Gore. I don’t think I’ve seen anyone do it before, which doesn’t mean no one has, but for Corbin to kick out of the Gore seems like a little much. Rhyno, incensed, went for another Gore that Corbin countered into the End of Days for the win.

This was a nice match, especially for an hour long TV show and, like the Dash and Dawson match, felt definitive.

Samoa Joe closes the show with a promo on Tyler Breeze’s nefarious actions in last week’s battle royal. That should be another great match, even with Breeze’s, ahem, other endeavors taking up attention (warning: spoilers). 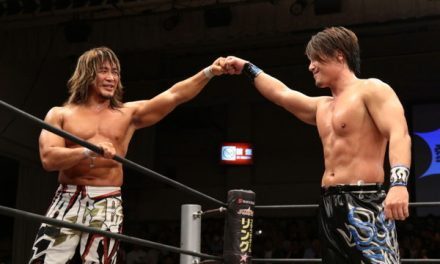