As always, be sure to check out my reviews of Stage One and Stage Two

On a night that will be filled with action, they got in and out while still doing a great job of getting everyone over. Evans heeled it up with a pre-match promo where he tore down everyone in the building. Cage looked incredible on offense, while Evans weaseled his way to a flash win. They had the entire crowd eating out of the palm of their hands. Cage gets his revenge post match by destroying Evans even more. ***1/4

There is no fuck around time tonight. Busick and Hero waste no time getting down to business as they attempt to knock each out with some intense, vicious shots. The pace slows down a bit and what we get is the PWG version of the mini-epic that makes the G1 Climax so awesome. It’s short, but never lets up and bombs are thrown. They build up to an Avalanche Piledriver spot that moves Chris Hero on in the tournament and kills Busick dead. This was pretty great. It’ll be the last time we see Biff Busick in Reseda, and much like his character, he gets a modest curtain call. ****1/4

What starts as a slower paced match ends up being one of the better worked matches of the night. Slow to start as Scurll really lays the arm work on thick as Excalibur and Chuck Taylor talk about Trevor Lee’s shoulder after last night’s Guerilla Warfare match. The match eventually escalated into a classic back and forth bout with Lee really selling the shoulder like a pro. Every time Lee makes a comeback, The Villain puts an end to it with a counter to reinjure Lee’s shoulder. It culminates to the end where Lee gets shoved off the top rope, Scurll hits his tornado DDT and applies the chicken wing for the tapout finish to move on in the tournament. ****

This is clearly a match that could main event and sell out every Indie show in America. The result is a very solid match that lets the crowd eat out of the palm of their collective hands. Pentagon Jr. controls most of the match, but eventually Zack Sabre Jr. reverses a suplex into a kimura and gets Pentagon Jr. to tap out. The match had exactly what you’d want to see from an exhibition between these two. Crowd loved every second of it. While this never quite got to an epic level, it was a very good match with strong work. ****

This was a striking clinic. They kick the shit out of each other throughout the entire match. Both men are high-end strikers and the knees and kicks fly. It’s all crisp and smooth as they build to a big finish. In time, it’s Bailey going to the air that separates the two. Bailey lands his somersault knee drop to End on the apron, brings him into the ring and hits another off the second rope, then finishes End with a dead-to-rights kick to the temple. An incredibly strong match. ****1/2

Will Ospreay vs. Matt Sydal

Reseda certainly is getting their money’s worth this weekend. Ospreay and Sydal had a Match of the Month caliber match earlier in the year and now they get to showcase themselves at BOLA. This ends up being a very good match showing the best of their striking and of course, the aerial flippys and stuff. While not quite as good as their match earlier this year, it’s everything that makes this matchup great, just condensed a bit. Ospreay pulls it out with his 630 splash. ****

Second Round Thoughts: This was straight workmanlike. No drop off in quality. Everything is essentially four stars or better. This may have been the most consistent stage of the entire event.

We take a break from amazing tournament wrestling to have your regularly schedule Mount Rushmore 2.0 match. We open with an open challenge to any group of wrestlers in the back to come out and take on all of 2.0. Out first…

…Fenix. He comes in hot clearing the ring of the Bucks and Roddy before succumbing to Super Dragon…out for the same…Angelico…then the Inner City Machine guns. That was a fun transition to the match. All of the faces fly around to really kick off the match and put the heels in peril. Once the match settles down, Rich Swann eats a long beat down by 2.0. A hot tag to Ricochet gets cut off quickly and then it breaks down into your traditional PWG everybody-in-the-pool melee where everyone gets their shit in and then some. Roddy has a series in this match where he subdues all four faces by himself and it’s a great display to see him realistically destroy four guys with his frantic offense. To finish it off, he superplexes Fenix onto the field to the outside. Pretty incredible spot. The extended go home simply has everyone getting their spot to clear the ring. Eventually, Roddy hits the End of Heartache on Swann to get the win. This was pretty good, but never quite gets to the level you’re used to with these matches and the end didn’t quite put anyone in a grave…so…that is always a tiny bit disappointing. Still, you’d be hard pressed to not think it delivered. ****

Once again Jack Evans grabs the mic and gets some heat. Not only does Evans get some heat, but he makes fun of Hero’s weight…I laughed. However, cranky indie vet Chris Hero is great when he’s cranky. He beats down Evans for a long period. Unfortunately, the match gets a little awkward with Evans starts mounting a comeback and gets a ton of offense. Theoretically, Evans was absolutely destroyed by Brian Cage an hour ago, he comes out bandaged up, and he’s now in a back and forth with one of the top guys in the company. Hero eventually puts him away with the ripcord elbow. The match was good, but I think it could have been structured a bit better. Evans though, looked like a million bucks in this tournament as the little shit talker that took a beating and got himself over as a face in the process. He tells everyone to fuck off on his way out.  Again, I laughed. ***1/2

‘Speedball’ Mike Bailey vs. Will Ospreay

Ospreay comes out with a noticeable limp and the story of the match is Ospreay just won’t stay down as ‘Speedball’ unleashes all of his shit on him. Ospreay would mount some pretty impressive comebacks that really made you believe, however after missing his finisher in one last gasp, Bailey hits a nasty shoot star knees that sets up his knockout kick finisher. The match really put over Bailey as a legitimately strong competitor, not just the try hard underdog. ****

The Leaders of the New School EXPLODE! This is the type of flawless match you’d expect from two guys that know each other as well as they do. They roll in and out of holds flawlessly. It’s a crisp exhibition where each transition is smooth. Perhaps the only major criticism is aesthetically, the two never quite got serious enough for my liking for a semi-final match. A little too much goofing around, which I guess is personal preference. In context, it just didn’t get me invested. Even when things got a little more serious, there wasn’t enough umph to get me thinking they cared about the stakes. This holds true especially when you compare the work of the other semi-finals where bombs are thrown and the aggression was high. Still though, the work is pretty flawless as you’d expect and I did enjoy the final stages where both wrestlers seemed spent and wondered how they could put their friend away. Sabre Jr. finally puts Scurll away after reversing the chicken wing and locking in the arm bar. ***3/4

It’s everything you love about PWG. It’s a comical, crazy, melee ensuing spotfest that gave fans some good fun before the finals. To start, it’s a bit slow as everyone gets their one-on-one in the spotlight. Of course it breaks down. Everyone flies. Everyone gets their dick kicked in. Ciampa sticks his finger up a few buttholes…in slow motion…and it ends up being one of the longest, most synchronized slow motion spots of all time before Andrew Everett and Mark Andrews just can’t fake a high spot in slow motion which leads to 5MB winning with the The Best Friends finishing off the Everett-Andrews duo. Big hugs all around and the crowd showing their appreciation for Chucky T. It was just a fun change of pace. Your mileage may vary on this, but I loved it.  N/A

These are the three hottest wrestlers in the company right now with all of them matching up in some regard on recent events and all having several Match of the Year candidates in PWG. Needless to say, this is the right match.

To start, it’s a series of three-way submission holds that leads to an early stalemate. After some grandstanding, we get down to business…and I hate to be the one to say it, but Speedball gets an all too obvious boner. Anyway…Chris Hero and Mike Bailey have a fantastic one-on-one that really displays their strikes. They just kick the shit out of each other with Sabre Jr. conveniently out of the picture. Hero eliminates Bailey with three piledrivers, the third being Gotch style. Sabre Jr. jumps back into the action, sneaking up on Hero and immediately starts working the arm. It’s a heated back and forth with Hero’s striking and ZSJ’s arm work. Big spot, clearly ripped off by Bayley for the Iron Woman Match where ZSJ locks in a tequila sunrise with boots to the face which was escaped and quickly re-applied giving Zack Sabre Jr. the tapout win as he becomes the 2015 Battle of Los Angeles winner.

Great match that I think was structured a bit differently, but the work was pretty fantastic by all involved. Chris Hero is really coming into his own as the veteran indy guy. ZSJ is legitimately one of the Top 5 best in the world. Mike Bailey has become a star indie talent and BOLA has shot him up the rankings similarly to the way Trevor Lee, Kyle O’Reilly, and Adam Cole have benefited from getting the big push from this tournament.  The work is very good, but the structure of the match knocks it down a peg. ****1/4

Post-match, Roderick Strong comes to the ring and we get the stare down and set up for the championship match in the future.

Sabre Jr. gives his speech and all of the European competitors in the tournament come to the ring and celebrate.

Final Stage Thoughts: The booking wasn’t elite and the match to match storytelling somewhat lacked throughout, but all three semi-final matchups delivered to some degree. Your mileage may vary, but they were all worked at a high level. The two non-tournament matches provided a great change of pace. The final match was structured in a manner that will be slightly divisive, but the work simply overcomes it.

Overall Tournament Thoughts: This is one of the greatest tournaments in the history of wrestling from a match quality standpoint. Its combination of quality and worldliness simply make this the premier independent wrestling tournament we may have ever seen before and it stacks up with those famous Super J tournaments from the 90’s. I’ve got SIXTEEN (16!!) matches at four stars or better and there isn’t a single stinker over all three stages with a run time of nearly eight hours. Even if I’ve overrated some of these matches, even a little, this is still an insane card and is the EVENT OF THE YEAR. Nothing will come close to this as we enter the final few months of the year…so get prepared, sit back, and watch this event. Its mandatory viewing. 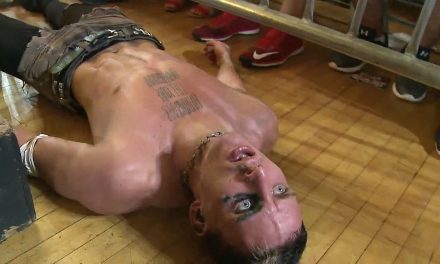