As always, WWE NXT has a lot to live up to following an exceptional Takeover special. Takeover: Respect was headlined by Sasha Banks and Bayley in an ironman match, notable not only because it was a women’s ironman match, but because it was the first time a women’s match headlined an event of this caliber in WWE. These first episodes following Takeovers are often resets and, as a result, lackluster. This time, however, there were literally (maybe) dozens of possible storylines set up for months in the future.

The NXT after a Takeover almost always starts with the triumphant party from the main event. Tonight, obviously, starts with Bayley and the expected explosive reaction that included a strong “match of the year” chant.

Bayley talked about the history that her an Banks made by main eventing and talked about the influence of Dusty Rhodes on both Bayley and Banks at the WWE Performance Center. Her point seriously cannot be overstated. There’s a gulf between NXT’s women’s wrestling and the main roster’s #DivasRevolution. The influence of Dusty, not only on women’s wrestling (along with Sara Del Rey), but on NXT as a whole. Clearly they can’t replace Dusty’s knowledge and the next batch of wrestlers coming through NXT will be under immense scrutiny as a result.

Alexa Bliss interrupts Bayley and comes into the ring along with Blake and Murphy. Bliss gives Bayley a wonderful congratulations that was exceptionally acted, but gleefully transparent. Bliss snatched the title from Bayley and laid the gantlet down. All the while Blake and Murphy were screening Bayley from getting to Bliss. This could be a fun feud. Bliss is well improved and the added element of Blake and Murphy as lackeys has potential, if it’s handled with the proper tone. Can NXT maintain that proper tone? Maybe. The main roster? Absolutely not.

A promo from after Finn Balor and Samoa Joe won the Dusty Rhodes Tag Team Classic last week is aired (it wasn’t on Takeover). Balor and Joe celebrate their win and Joe asks for a title shot from his good friend Balor. Balor accepts, but Commissioner Regal says it isn’t quite that easy. Regal books a battle royal for next week’s (tonight’s) main event. The winner will be the No. 1 contender and Joe is already included.

I loved the Dusty Rhodes Tag Team Classic, but I’ll be honest, I won’t miss typing that out five or six times in every review.

After a commercial, Tye Dillinger, Apollo Crews and Rhyno have short backstage promos declaring their intent to win the 23 man battle royal.

It’s funny to listen to the Full Sail University crowd try and keep up with the spoken intro to the Vaudevillains’ theme. Not as easy as following along with Enzo.

This is a fine match, especially for TV, but it’s very nearly time to have the “what happened to Byron Saxton?” conversation. He hasn’t been the same since that one RAW when he had to do half the show by himself. Suddenly he’s the most earnest and least aware of continuity. He’s creating narratives that didn’t exist and constantly getting the short end of the stick in exchanges with Corey Graves. And that isn’t Graves’ fault. It’s like a child arguing with an adult.

The Vaudevillains get the win with the exceptionally-named Whirling Dervish. Take a look at that, WWE, you can have champions not named John Cena win matches. Remarkable.

The Brainbusters 2k15, er, Dash and Dawson, follow up the match with a backstage promo with Devin Taylor (we’ll miss you, Devin). They’re next in line for a title shot and deservedly so – they were exceptional at Takeover: Respect.

Dawson and Dash do the math … and they think THEY are the rightful Tag Team Champions! #WWENXT http://t.co/MgDuqzUM8o

Evie, who some might know from SHINE, actually got an entrance! That bodes well for her chances, right? Not so much. She’s got major ass kicker Nia Jax in both wrestler’s NXT debut. Jax’s career in WWE is going to be fascinating. She’s certainly not the prototypical #DivasRevolutionary. She can play the Tamina Snuka role, but convincingly. Jax put such a beating on Evie that Full Sail chanted “just stay down.” This wasn’t Asuka levels of brutality, but it was more dominant. Jax won with a mixture of a chokeslam and a Rock Bottom.

Tyler Breeze and Baron Corbin drop a couple of short promos in between commercials as we head into tonight’s main event, the 23 man battle royal to determine the No. 1 contender for the NXT (Men’s) Championship. Before that, however, we’re treated to a special message from Eva Marie who is in Paris. She’s just letting us know that she needs a break after her “grueling matches.”

23 Man Battle Royal for the No. 1 Contendership for the NXT (Men’s) Championship.

Only Rhyno, Corbin and Joe receive proper entrances, everyone else is already in the ring. I love that is battle royal has such a random number of people. In fact, we wouldn’t have any idea as to how many were in it if it weren’t for Dillinger’s promo. The numbers are a little inflated with tag teams; Enzo and Cass, Dash and Dawson, the Hype Bros and Blake and Murphy are all in the match. Gargano and Ciampa made the cut as well, but are they still a tag team? Just as a note, both Bull Dempsey and Mojo Rawley are wrestling in t-shirts tonight. Dress for the job you want, not the job you have. NXT (Men’s) champions don’t wrestle in t-shirts. Foreshadowing. Steve Cutler was first eliminated, and was followed quickly by a couple of fellow jobbers eliminated by Crews and then topped off by Gargano who was launched on the three of them by Crews.

We head into a commercial after Gargano’s tossing, and here’s where…well, here’s where I would normally launch into a tirade about commercials during matches on the network you own. But, if you’re going to put a commercial into a match, it might as well be early on in a battle royal. I’ll allow it. Though, apparently, during the commercial, we missed the first close call of the match. Because of course. Blake was tossed over the rope and had one foot on the ground before pulling himself back in. Guys fell fast and furiously after that, however. Derrick Moss, Big Cass, Dash and Dawson, Enzo and Dillinger all left in short order. Dempsey was trying to throw Corbin out next, but Rhyno came to Corbin’s aid in a nice piece of continuity you’re only likely to see in NXT, at least in WWE properties. There are now nine wrestlers left and it’s nice to see that Zach Ryder is one of them – and that Rawley isn’t. Just as soon as I say that, however, out Ryder goes. At least he hit the top 10. The next elimination was a double cross. Corbin tossed Rhyno. Presumably, this will lead to another Corbin-Rhyno match, which would be OK with me since Rhyno has been involved with all but one Corbin match that was actually watchable, his Brooklyn bout with Joe being the other. We go straight into another commercial which would be OK, as we stated earlier, but CIAMPA WAS ELIMINATED DURING THIS COMMERCIAL THAT DIDN’T NEED TO EXIST. And it was a badass STO on the apron from Joe that eliminated him. I don’t get it, man. Stop it. We’re down the the final four, and it’s pretty predictable: Joe, Corbin, Crews and Tyler Breeze. Joe put the boots to and eliminated Breeze who, as we know, wouldn’t have won a proper match anyways. Corbin tried to throw Joe out, but Joe caught himself and kicked Corbin away. Breeze pulled Joe down setting up another Breeze loss somewhere down the road.

Corbin and Crews square off and get to heavy hitting. Corbin actually has some good power moves -all of which are better than the End of Days – and he pulled out a two-handed chokeslam that looked pretty great. Corbin tried to throw Crews out a number of times, but Crews held on every time. Crews hit three of his signature enziguries in a big comeback spot and clotheslined Corbin over the top rope to win the match. Nice job by the NXT crew, both in the ring and in the booking of the match. Crews isn’t a total surprise to be No. 1 contender, but it’s a surprise to see him getting a run at the NXT (Men’s) Championship this early on.

This was a pretty stellar follow-up from a Takeover. There was no “what are we doing next” holding pattern, storylines that were set up were followed up on and new ones developed from novel pairings. Tons of fun and definitely the best hour of WWE programming you could watch this week outside of two Table for 3 episodes. 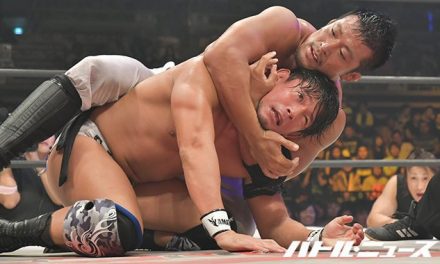