Dragon Gate began 2015 quite lethargic. Monster Express had lost some of the fire it once possessed, Mad Blankey, for as great as they were, lost some direction, and The Millennials struggled to gain approval from the Dragon Gate fanbase. Since August, however, Dragon Gate got the shot of adrenaline it needed. The Millennials and Mad Blankey are gone. Shingo Takagi left Monster Express in shambles after turning on Masato Yoshino and his best friend, Akira Tozawa, and The Jimmyz, now occasionally backed by Don Fujii, have been given a fresh coat of paint.

On paper, Dragon Gate Gate of Victory is very interesting. Nothing stands out with the exception of Takehiro Yamamura and Kaito Ishida being placed so highly on the card as Yamamura teams up with Ryo Saito while Ishida does battle alongside Jimmy Susumu. That being said, Verserk, Takagi’s new unit, has members up and down the card and as I’d soon learn, Korakuen Hall does not approve of their actions!

The real story is the chemistry between Lindaman and Super Shisa as Santa Maria did her usual (yet lovely) shtick and Shachihoko BOY was more of an afterthought. In a year that the #grapplefuck movement isn’t as prevalent, or if you aren’t a fan of that style, Super Shisa is a perfectly viable pick for one of the three Best Technical Wrestler picks for the WON Year-End Awards. He’s so quick, so smooth, and so unique, and now we’re seeing his training pay off as Lindaman is demonstrating the same traits. Lindaman is showing more confidence each time he steps into the ring. I get excited when I watch him. In a few years, he’s going to be on top of the Dragon Gate world. **3/4

Two units with new members do battle in the first official match of the night. T-Hawk for Monster Express, Flamita for Dia. Hearts. Flamita fits like a glove with DH. His high-impact, fast-paced offense obviously blends well with Dragon Kid, who appears to be Flamita’s full-time tag partner. Flamita was the star for his side and this match. Flamita has only had two singles matches in Dragon Gate this year and yet he always manages to standout as someone special in these six-man matches. His offense here was beautiful.

I could see T-Hawk struggling with Monster Express. He’s taking a backseat to Yoshino and Tozawa, which is for the best after being somewhat of a poor leader for The Millennials, but Yoshino and Tozawa are also such charismatic wrestlers that it could leave T-Hawk in the dust. The crowd connected much more with Tozwawa or Yoshino than they did with T-Hawk. A solid, fast-paced opener. ***1/4

Draztik Boy is an absolute pleasure to watch. I really hope he’s able to come back for more tours in the future. He’s short and a little chubby, but my goodness he is fun to watch. Eita, who turned heel and then was turned on in the same month, looked good here. I look forward to seeing where he goes from here. ***

After the match, Verserk, the new heel unit led by Shingo Takagi, came out and attacked Eita. For what it’s worth, Naruki Doi is an incredible promo.

“VERZERK attacked Eita after his match. Doi lamented yet another boring, useless Eita match. He introduced VERZERK & their concept of berzerk fighters to the Tokyo fans. He passed the microphone to the most berzerk of all, Kotoka. Blehhhhzerk was going to take the Triangle Gate in the main event and thus control all the blehhhhhhlts in the company. Blehhhhhhh!”

Susumu, Saito and Dragon Gate’s two youngest talents – yes, please! This was Ishida’s biggest match yet and perhaps with the exception of filling in for CIMA on a few Summer Adventure Tag League shows, this was Yamaura’s biggest match yet. These two brought it! They looked motivated and excited to be there and their performances were very enjoyable. This match started off feeling a little like an exhibition, as the youngsters were taking thing slow and Saito and Susumu showed no intentions of dishing out any real punishment. A flip was switched along the way and this match ended up being a complete slugfest. Ishida has some beautiful kicks and Yamamura is already a solid wrestler. Those that have him pegged as a guy having “it” are going to look pretty smart in a few years. ***3/4

Spoiler: Mondai Ryu did NOT take the fall! I went into this with extremely low expectations as I expected YAMATO and Doi to shine before having Ryu take the fall. Ryu was still physically abused by Masaaki Mochizuki, which was lovely, but in the end, YAMATO was able to score the fall on Hulk after a nasty Galleria. Mochizuki’s stiff offense, combined with Shimizu’s Ryback-like power offense saved this from being a complete bore. ***1/4

This was a major bummer. I like Quu Quu and I love Kness, but these two did not mix well. I was completely on board with Kness joining The Jimmyz, but his performances since joining them have been lackluster. This started so slow that it lost me for a while and then by the end, when Kness was going through some spots that I typically enjoy, I still had no desire to care about this. **1/2

“Horiguchi asked Tanizaki if today’s’ match helped him put the recent troubles with the Jimmyz behind him. He was a pro wrestler, and this is how they settle things. He had a great match with Kness today. Let that wash away his troubles. Tanizaki refused. Everyone was so quick to accept Kness into the unit. Well. Either Kness goes or he goes. Kagetoras’ music hit. He appeared on crutches (and with a large beard) to talk some sense into Tanizaki. He as still going to be out for some time while he rehabs his knee. He wants to return to the Jimmyz, but not this Jimmyz. He asked Tanizaki to reconcile with them, for his sake and for the sake of the Jimmyz. It appeared to be successful. Tanizaki apologized for his recent behavior. When he gets mad about something he does really stupid things. From here on, the Jimmyz would move forward with 7 members. Handshakes and hugs were shared, followed by the first ever 7 man Jimmyz Train.
The peace was short-lived. Tanizaki attacked Kagetora from behind, giving him the Implant. VERZERK came out joined the attack. As was now evident, Tanizaki was introduced as the newest berserk fighter, Naoki Tanizaki of VERZERK. Mr. Quu Quu Toyonaka Dolphin was done. He was once again the out of control Naoki Tanizaki. He stripped off his Jimmyz colours, then donned the VERZERK colours”

By far the hottest match of the night! The crowd was completely behind the trio of veterans and they delivered their best performance of their reign as Triangle Gate Champions. Fujii once again brought the good stuff as he and Shingo brought over some intensity from their 10/4 battle for the Shingo’s Dream Gate title. Kotoka was still not at the skill level of anyone else in this match, despite Dragon Gate seemingly being behind him right now. Even Cyber Kong, especially in these sorts of matches, has a special charm to him. Kotoka just doesn’t have that. This was one of the more enjoyable Triangle Gate matches of the year. The crowd, who sat on their hands for the prior match, was very much into this.

Punch Tominaga delivered the death-blow to Shingo by nailing him with a pair of brass knuckles, allowing Fujii to get the pin. Tominaga has statistically been the worst wrestler on the roster this year and from a workrate perspective, he’s certainly on the lowest tier. That said, Tominaga is a charismatic individual. He took loads of abuse from Takagi over the past month and the Korakuen crowd really enjoyed seeing Tominaga actually dish out some punishment. Verzerk falls in their first Korakuen main event, just like Mad Blankey did. If they can repeat the success of Mad Blankey, well, I very much look forward to seeing what’s in store for Verzerk. ****

“Punch Tominaga interfered in the late stages of the match to attack Takagi. He Osaka06 joined in on a 3 way PT Kick that allowed Fujii to score the pin. VERZERK attacked him, but Eita made the save. He was joined by El Lindaman, Ishida, & Yamamura. Lindaman demolished Mondai Ryu with the Locomotion Germans then a kata-ha-jime. Eita announced that along with PT they were making a new unit for the sake of destroying VERZERK. He asked CIMA to join forces with them. CIMA was flabbergasted at first, but he quickly warmed up to the idea. PT was real fucking cool today. Lindaman was doing his thing. Ishida & Yamamura were already ready to hit the front lines. Yeah. It had been a long time since he had a hand in creating a new unit. He was in. So was Gamma, and so was Fujii….

Fujii apologized. He had some other plans. He talked about the events in Hakata this past weekend. He really hated VERZERK, but he knew some others who hated them even more. He called out the JIMMYZ. He asked them to join him for an all out war with VERZERK. But it would not be the Jimmyz. He talked about the tag league and the Fujii Heya team. Saito mentioned that he did only wear that costume 5 times. Fujii Heya would enter the ring one more time. But this time, all the Jimmyz would wear sumo style costumes. They wouldn’t be the Jimmyz. They would be the Sumoz. All were given Sumo styled names. Both sides agreed to all out war in the November Korakuen. Doi pointed out that there were 7 members of VERZERK, but only 6 Sumoz. Saito asked the new unit if he could borrow PT for one night.

GM Yagi announced the rules. It will be under best 2 out of 3 rules. The first match will be a singles match. The second will be a regular tag team match. The third and final one will be an 8 man tag.
Takagi promised to force Tominaga back into indentured servitude. VERZERK left.

Saito had one more thing, regarding PT. His hairline is pretty similar to Horiguchis’. Kagetora is out for a while. It was decided that for his Sumoz stint, PT will be called Sumo Hagetora.”

Final Thoughts: This wasn’t a Show of the Year contender, or even the best Korakuen show that Dragon Gate has had this year, but regardless it was a really fun show.

Kness and Tanizaki stunk up the joint with whatever they were going for but the post-match angle and main event sent the fans home with a happy ending. If you aren’t a hardcore Dragon Gate fan of someone looking to invest a lot of their time into Dragon Gate, I would suggest checking out the main event and Susumu & Ishida vs. Saito & Yamamura to get a glimpse at the future stars of the company. If you are someone who follows Dragon Gate with a passion like myself, you’ll find much more enjoyment out of this show due to the angles coming off really well, and on a more personal note, El Lindaman finally having some direction with CIMA’s new unit. Thumbs up show.

Thanks as always to iheartdg.com for the translations on promos/stories. 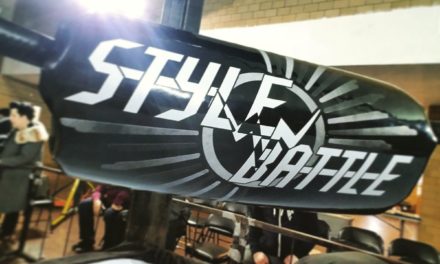 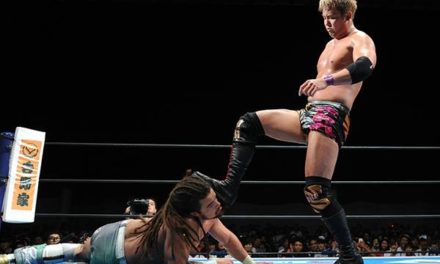