Fresh off a fantastic Uprising show in London, the stars of Revolution Pro Wrestling and New Japan Pro Wrestling headed over to Reading for the first iteration of Global Wars UK. Featuring all members of New Japan’s Big Four in singles matches the show seemed primed to deliver as the last stop before NJPW’s King of Pro Wrestling.

One of the problems I noticed almost immediately was a high and flat roof and that meant the crowd noise dissipated fairly easily. This is a stark contrast the York Hall which is the complete opposite and crowd noise is enhanced by the venue. It wasn’t awful by any means, but the crowd definitely came off significantly quieter and that’s at the very least a part of the reason.

Unlike the previous night in London, we got a very watered down version of Naito. He didn’t bother wearing the suit or the mask, he was less of a dick and he didn’t even bother to spit on any kids in the crowd. I guess one could look at it as some real meta psychology of Naito character being too lazy to go full on dick mode on a lesser show.

I was surprised to see KUSHIDA be the one to take the pin here from Naito rather than Kirby, in what ended up being a pretty miserable week for him getting pinned by Omega, reDRagon, O’Reilly and Naito. Anyway, this was a fun opener where all three guys got their time to shine and everybody came out looking pretty good. It had a nice flow to it and Naito did a very good job of cutting the two faces off. Good stuff. ***1/4

I have to admit I was a shade disappointed with this match. Going in I was expecting it to be hilarious, and while it started off pretty funny it kind of ended up being just a normal match that was just fine. Gedo’s English was very good, and I really enjoyed their early interactions, but when it became just a straight match where Grey won after some basic heel tactics there wasn’t really much of a reason to care. I was solidly worked, but on a card where this was never going to be a standout in-ring wise they would have been better served going the full comedy route. **3/4

My love for Kojima here was completely confirmed. While the match was fine but nothing overly special, with Haskins being the real standout, Kojima talking with the fans while on the apron in broken English was a clear highlight. The best bit was he clearly couldn’t understand at least half of what was being said to him, but that just made it all better. He worked it into the match too, as after falling out with a fan in the front row he started working heel. Just fun stuff. ***1/4

The first of the four big singles matches on the card featured probably the most over of New Japan’s big four in the UK: Shinsuke Nakamura taking on the former Undisputed British Champion Marty Scurll. I’d say that overall this match was on a very similar level to the Damo match the night before. It didn’t quite have the same level of crowd reactions and the peaks weren’t quite as high, but overall it was a far smoother match and didn’t feature any nasty botches that really took me out of the Damo-Nakamura match.

This was classic Nakamura B level effort, where he’s clearly not going all out and getting by with his immense charisma and by running through his signature moveset. Scurll worked really hard here, in many cases working around Nakamura and almost single-handedly making it feel like a complete match rather than just a showcase for Nakamura and came out looking very good as a result. Having a one count kick out for the Boma Ye for the second night in a row didn’t sit quite right with me and made both seem less impactful, but overall this was still a strong match and a good showing for Scurll. ***1/2

We at Voices of Wrestling have made no secret about our lack of love for the Gun ‘n’ Gallows team, but to be fair to them they were actually the better team in this match. As a team Castle and Samuels are boring, and when you throw a DQ finish at a match with them it’s never going to be anything other than skippable. Yawn. **1/2

Will Ospreay vs. Kazuchika Okada

Here we are at the match I was most looking forward to on this show. Ospreay is probably the guy I get most behind in wrestling today, and Okada is my personal favourite of New Japan’s big four so you can imagine going in I was a huge fan of this match on paper. I perhaps had overly high expectations because, while this was very good, I came away slightly disappointed.

That’s harsh, this was a great back and forth flowing contest, full of counters and excitement. The two guys even meshed pretty well together, and seemed to very much be on the same page throughout which isn’t always the case when there’s a language barrier involved. All that being said though, this felt to me like it was wrestled as a mid-card match and that there was plenty left in the tank here. We didn’t get your late match Rainmaker counter that leads into your series of high tension counters that you’ve come to expect from big Okada matches. That’s because this wasn’t wrestled like a big Okada match, but that doesn’t mean it wasn’t still very good. For me it was still the match of the night, but I’d have loved to see this match switch positions with the main event as I feel you’d get a similar AJ-Liger match in this position but in a main event you’d have seen a fair bit more from this one. ***3/4

While the Damo-Nakamura match was taken down a notch by the two guys accidentally dropping each other on their respective heads, this one was far cleaner of an affair but never really hit the same heights. Speaking of dropping people on their heads, Damo put a clever call back spot to the move where he dropped Nakamura on his head by hitting a similar but safer looking variation on Tanahashi that got a great reaction from the significant portion of the audience who had clearly been to both shows.

Like most Damo singles bouts, this one started with an extended Damo period of dominance before an eventual big comeback from the Ace of the Universe. Unlike the night before though we had Damo’s trash talking which was a real high point, making his somewhat boring control periods interesting by really verbally laying into Tanahashi. Unfortunately when it did pick up it never really grabbed me to any huge degree. This was a good and well-structured match, but for me lacked any real buzz to put it over the top. ***1/2

It seems kind of crazy that this was a first time ever match. Liger was super over, as he always is in the UK due to his World of Sport roots and him in general always working super hard when he comes over here. You could also tell that this match meant a lot to Styles, so was giving his absolute all. What resulted was a great match that got the best out of a limited Liger and was a fitting main event.

Styles took the most of this match, as he should do, but gave just enough to Liger in hope spots to keep everybody interested. Liger didn’t do a whole lot but what he did do looked very good, and in recent times AJ has really perfected the art of building a match around the Styles Clash. Liger desperately struggling to try to attempt to escape only to receive a Hollow Point followed by the Styles Clash he’d been so valiantly trying to escape was a wonderful ending to a great weekend of shows. ***3/4

Final Thoughts: While not on the same level as the previous night’s Uprising, this was still a strong show. Nothing was what I’d deem as must see, although Ospreay-Okada came close, but top to bottom it was consistently good and what wasn’t great went short. As I mentioned, switching around the positioning of Ospreay-Okada and the main could have put it over the edge, but as it is there’s still definitely stuff worth watching here, especially if it eventually makes its way onto New Japan World. 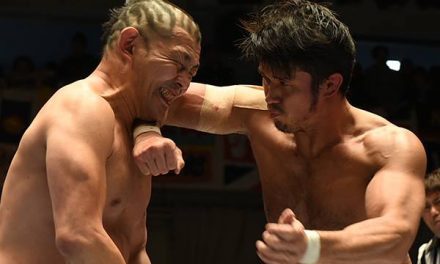