While New Japan Pro Wrestling on AXS-TV is gearing up for its five week run of the 2015 Wrestle Kingdom event, this week we wrap up 2014 with the finals of the annual World Tag League featuring Katsuyori Shibata and Hirooki Goto vs. Karl Anderson and Doc Gallows. While the World Tag League might not have the built-in excitement that Wrestle Kingdom has, could Mauro Ranallo and Josh Barnett breathe life into this match with their English commentary? Could I sit through a second-helping of a 2014 Doc Gallows match? The wrestling world needs answers so let’s get right to it, shall we?

The show wastes no time, skipping the ring introductions, and jumping right into the opening eight man tag match featuring CHAOS ( Kazuchika Okada, Shinsuke Nakamura, Tomohiro Ishii and YOSHI-HASHI) going against the all-star team of Hiroshi Tanahashi, Kota Ibushi, Togi Makabe and La Sombra. With the build to the Tokyo Dome in full swing, the match’s main focus was to give each of the viewers a little taste of what they could expect at the Wrestle Kingdom event. Ranallo and Barnett used this time well to help set the stage for each individual Wrestle Kingdom match while still finding time to dip into their wrestling nostalgia bag-of-tricks. As Nakamura is placed on the receiving end of a quadruple dropkick, Ranallo sifts through his collection of wrestling memories to give us his first old-school tie in.

“Wow! That was a four-way dropkick. I don’t know if I’ve ever seen that before. Well, wait a minute. Maybe down in Texas with the Von Erichs.”

The second big take-away during this match was Ranallo’s plug of New Japan World. It was the second week in a row and it is the perfect way to remind the viewer that some of these matches are clipped but the entire match is available online via New Japan’s streaming service. I am unsure if Ranallo was instructed to do so but I tend to believe Mauro’s professionalism, love of the product, and common sense were the driving factors in this smart decision.

“Yeah, each one is taking a page out of the other’s book as Tanahashi lines him up and charges the corner and gets picked up by Okada.”

“When do those pages run out of those books? We’ve been talking about taking pages out of books for years in commentary.”

The lone disappointment? No post match interviews after the match. The broadcast is dedicating forty minutes to the main event without a second to spare. Wonderful!

The show returns from commercial break with Hirooki Goto in studio looking back on the World Tag League Championship.

“We had the Tag League right when we were struggling to win. We were desperate to win. I remember that well. For me, 2014 was a year of tag matches. If I was going to team up, I wanted to win but we couldn’t win in a tag match. Things weren’t right. I think that is when we reconciled after the singles match at Seibu Dome in G1. We formed a better relationship and decided to start fresh again. That is when the Tag League started. Until then, we only fought in non-serial big matches. We did not prepare together for tag matches. So this World Tag League was our first tour together. With time we built chemistry. I think the whole event made us better as a tag.”

When asked about their opponents being IWGP Tag champions, Goto made his point clear that the IWGP Tag Titles were the goal.

“Yes, it came to mind. We had lost in a title match before that. The fastest way to face them again was winning a title here. We’ve faced them multiple times. We knew how good of a team they were. I knew they’d advance through the tournament, no doubt.”

As they always do better than any other announcing duo, Ranallo and Barnett gave a brief, yet informative, history of the World Tag League reviewing former winners, the rebranding from the G1 Tag League in 2012, and pointing out that Goto and Anderson teamed to win the original, rebranded World Tag League. Barnett kept in his wheelhouse and pointed out Katsuyori Shibata’s MMA training, Goto’s hard-hitting style and the childhood history between Shibata and Goto. Lots of information was thrown at the viewer but all of it was easily digestible. In three minutes, even for those who never watched the product before, you had a firm grasp of what built to this moment. No wacky backstage vignettes or over-produced video packages. At no point does Ranallo talk down to the viewer. Simple, solid professional wrestling broadcasting that did exactly what it needed to do.

The match itself? You had to ask, didn’t you? Well, at the time our review of the match was less than positive. Maybe it was the “American” style, maybe it was the overexposure of Bullet Club, maybe it was the fact that, overall, the World Tag League is a bit of a lame-duck period sandwiched right between King of Pro Wrestling and Wrestle Kingdom. Whatever the case, this match did not have much going for itself then and it isn’t a match I’d recommend seeing a year later. Ranallo tried. Barnett tried. Everyone tried. Ok, Gallows didn’t try but everyone else seemed to try. It was the first time I can remember reviewing these AXS-TV shows where I was searching for the fast-forward button on my DVR remote. Thank God it was stuffed somewhere between the couch cushion and the pillow because I think it would have been used and used well here.

After the match, Anderson and Gallows screamed and yelled in the media presser. It was what you’d expect (full of “F-bombs”) and there isn’t a need to type this out, is there? Good, let’s move along.

In the ring, Shibata and Goto celebrate their win. Shibata, a man of little words, takes the microphone first.

“Can I speak for a moment? Ever since I started wrestling professionally it is not like I’ve achieved anything in particular. Today, for the first time, together with Goto I achieved something that will remain on the record. Now, it is about time. It is time we wear a belt.”

After Goto agrees, we go to the media room where Shibata continues his verbal streak.

“My thoughts on this series? I didn’t think too much that it’s a tag team match. The moment we were paired I started by believing in my partner. It was my very first step. I wasn’t afraid of anything. We haven’t changed at all since high school. I am just hungry to keep moving up. It is comforting to have a partner next to me that I know I can rely on.”

With the match and presser out of the way, Goto is back in the studio to give his final take on the 2014 World Tag League.

“Yes, I realized that we have strong ties. The power was formed through a long series. The series showed us the possibilities. We gained confidence. I was happy to accomplish something. I was glad it led to a title match. I think that was when our tag team became one. He (Shibata) seemed genuinely happy to win but I don’t think he’s the type of guy that stops there. We are definitely hungry for more titles as a tag team.”

Final Thoughts: You know how the WWF used to put on a throw-away match between, oh I don’t know, Brady Boone and Johnny K-9 right before the main event of the night? That was this show. Everyone tried but for whatever reason it was just a bridge to get to the good stuff next week. The matches here were decent, the commentary was very good, the translated interviews were fine. Nothing is going to stand out but nothing is going to offend. Next week is where we really get the good stuff and I am excited to see and hear what AXS-TV has for us. Set your DVRs now. 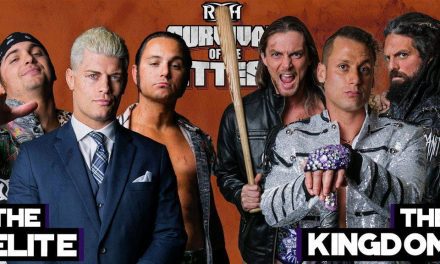