For what it’s worth, I think Dragon Gate is the best booked wrestling company in the world, but they’re not perfect. T-Hawk, while being immensely talented, has failed to capture the audience’s love the way that Dragon Gate had hoped. T-Hawk’s shortcomings are one small fault in a promotion that more often than not delivers quality booking to their fanbase.

The strength of their booking patterns isn’t booking strong units, something the promotion is known for, but rather having individuals stand out for short periods of time. The builds are fast and often unnoticed, as Josh Engleman explored in Overthinking It: Dragon Gate Statistics in 2015 while analyzing Jimmy Susumu.

“Take a look at Jimmy Susumu’s January, for example. In 13 matches, he was able to pick up eight falls. This was a perfect build to challenging for the Dream Gate in February. While he has been on the back burner for the last three months, they certainly got behind him in January.”

Recently, Dragon Gate elevated K-Ness from a low-level position in Mad Blankey to a focal point of The Jimmyz and one-half of the winning team in the Summer Adventure Tag League. Nothing felt forced about it, however. I never got the impression while reading results or watching K-Ness’ recent success that he was a “flavor of the month” or being shoved down my throat. While it may have been unexpected, it all made sense.

While short builds like the one Susumu had in January or K-Ness’ resurgence into relevancy are great, nothing gets me quite as excited as seeing Don Fujii being ushered into Dragon Gate’s main event scene.

Fujii, a former sumo, worked his way through WAR as a trainee before finding his footing in Toryumon as a part of the original Toryumon class. Fujii was a staple in Toryumon’s most popular unit, Crazy MAX, which lasted from 1997 through the transformation from Toryumon to Dragon Gate and into the tail end of 2004.

When CIMA formed Blood Generation in January 2005, Fujii was right there by his side. The birth of “Big Match Fujii” took place in May 2005 as Fujii took his future tag team partner, Masaaki Mochizuki, to his absolute limit in Korakuen Hall.

This match shows the true greatness of Don Fujii. It’s easy to forget that despite being a proficient comedy wrestler, he can certainly throw some bombs. There’s a certain charm to him. The roster is full of quick, nimble men and Fujii sticks out like a sore thumb. Despite his “Nice German Suplex”, his tope isn’t pretty, nor is his powerbomb, and yet that only seems to add to the Don Fujii experience.

The next time “Big Match Fujii” would make a singles appearance would be six years later as he battled Masato Yoshino, once again at Korakuen Hall, for his Open the Dream Gate Championship. On paper, it was a complete styles clash, but in between the ropes, it was magic. Fujii, who was just beginning his first Open the Twin Gate Championship reign with Mochizuki, was looking for more gold. His sense of urgency when trying to defeat Yoshino is a thing of beauty. There’s no joking around when Fujii gets positioned in a big spot. For him, it’s serious business. Fujii tasted Dream Gate gold in 2006 before losing the title to Jushin Liger, now he wanted it once again. The match that ensued is one of my personal favorite Dragon Gate matches ever.

Why is any of this relevant? It’s relevant because Big Match Fujii is making his return on October 4th against Shingo Takagi. The build goes back to what I talked about at the beginning of the column. Fujii, who was in the midst of a comedy team with Ryo Saito in the Summer Adventure Tag League, was hit with a dose of reality when he teamed up with Big Japan’s Daisuke Sekimoto and Yuji Okabayashi to battle Takagi and his cohorts, YAMATO and Cyber Kong. Fujii scored the pinfall on Kong, and while that would normally be an impressive feat, Mr. Takagi wasn’t so impressed. From IHeartDG.com:

“Takagi went off on Fujii for taking the win after Sekimoto and Okabayashi did all the work in the closing stretch. He also mocked the Fujii Heya tag league team. What rank was Fujii when he was a sumo again? Surely not the highest? 3rd tier, surely. He was fed up with his half-assed comedy.

Fujii appreciated his honesty, but talking badly about his sumo days is a punishable offence. Fujii had no idea what Takagi was trying to do these days, but he does know what Fujii wears around his waist. The Dream Gate title. Listen clearly, he wanted a title match.

Takagi was fine with that, as he had no challenger. However, he when he destroys the old man the next show in Mie won’t be Don Fujii Basho. It will be Shingo Takagi Basho. He warned him not to slack on his aerobics.

Fujii admitted he was old. But he was a fiery old timer. He would show Takagi what power an old man can hold. He was so serious about this that he was going to stop drinking while preparing.”

Fujii is taking this match so seriously that he’s going to stop drinking to prepare! If you’ve seen the Kevin Steen Show with Rich Swann, you surely know that Fujii has quite the alcohol tolerance (and it often leads to him getting naked), but Fujii now has a goal to work towards — he’s determined to take the Dream Gate title off of Takagi. Will that happen? I’m putting my money on no. That said, Fujii is going to bring everything he has at Takagi. Awkward dives, vicious powerbombs, and “nice” German Suplexes — Fujii is going to bring Takagi to his limit.

At the end of the day this will just be a bump in the road for Takagi, who is firing on all cylinders in the midst of his third Open the Dream Gate Championship reign. That being said, Fujii is going to bring an element of emotion that’s rarely seen in wrestling. If this delivers the way his matches with Mochizuki and Yoshino delivered, this will be something special. Fujii, a complex man, will once again be putting his game face on for October 4th. 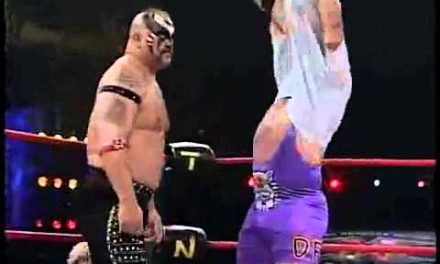