It seems odd to be slightly disappointed with a perfectly acceptable and competent 2-star-ish effort in young lions opener, but the bar has been set pretty high by these four, who I am on record as stating are the best group of lions at the this stage of their careers since the likes of future Hall of Famers Keiji Muto & Masa Chono broke in during the 80’s. As usual the work here was crisp, hard hitting, and technically proficient well beyond what you normally see out of young lions, which is less of a critique of recent classes and more of a compliment to how good all four of thee guys are. Stardom is a very hard thing to predict, but there is no question that all four of these dudes are going to be tremendous workers. I’d argue that they already are.

For the finish, Tanaka locked the single leg crab hold on White. Finlay was throwing all sorts of bombs to break it up, but Tanaka held on, and Komatsu rolled Finlay into a single crab of his own as White was forced to tap. Cool finish. **1/2

You have to give Juice Robinson credit. Here’s a guy who willingly gave up a spot that nearly every North American based indie wrestler would kill to have in order to wipe the slate clean and start from scratch. After asking for and being granted his WWE release, he banged around the indies for a few months, did some work in Europe, and now finds himself in New Japan, where he’s not only taking falls in nearly every match he’s booked in, but has also completely swallowed his pride and has worked young boy duties on shows he hasn’t been booked on. The move is a gamble, with Robinson figuring that if he can achieve some level of stardom outside of WWE, he can go back with a reputation and leap frog the homegrowns and relative unknowns in the pecking order, much like he saw guys like Sami Zayn, Kevin Owens, Hideo Itami, and many others leap frog him for the same reasons. His first tour was rocky, but like any new guy at the office, it still feels like he’s finding himself, and it’s way too early to judge how he’ll fair here until he settles in. For what it’s worth, he looked more comfortable here than he did early on in the tour, once again doing job duties, doing the honors for Yuji Nagata. This was just a match. Skip it if pressed for time. **

Mascara Dorada may have taken the fall here, but he was the star of the match. Aside from one junior title match earlier this year, New Japan hasn’t done much with him. At last word he was scheduled to stay in New Japan for one year, so here’s hoping they’ll squeeze in another push before the year is up, but time is quickly running out. Togi Makabe & Tomohiro Ishii, who are expected to face each other at King of Pro Wrestling next month, basically took the night off, but Ishii provided the most amusing spot of the match when he thwarted a Taguchi flying ass attack with a forearm to the spine. This was fast paced and the best match on the show to this point, largely due to Dorada and his great flying. ***

As expected, Sydal pinned Omega with the Shooting Star Press, which sets the stage for their upcoming IWGP Junior title match, and they looked very good working together which bodes well for the singles bout. **3/4

Naito, channeling his inner Toru Yano, escaped a standing rear naked choke by hitting a blind mule kick to the groin (after grabbing the ref and yanking him around to distract him), then adding a second dick kick for good measure before hitting the Destino for the win. This was one of the best built matches in wrestling over the last few months, but the match itself underwhelmed. There was nothing wrong with it, but based on the great chemistry displayed and epic brawls these two have had in the lead up, I was expecting something more heated, particularly from Shibata, who I thought would show more fire. Naito attacked Jay White (who was attending to Shibata’s sore balls) in the post match, then beat up a cameraman on his way out for good measure before Shibata came flying in for the save as they brawled to the back. ***

Okada & Styles worked way harder than they had to here, going well above and beyond the token one or two sequences that nobody would have blamed them for delivering in the popcorn position.

Cody Hall continued to show in this match the strides he’s made in the confidence department on this tour, as he’s starting to consistently feel like an active participant in his matches as opposed to a green guy looking lost and being carried. His improvements can no doubt be chalked up in large part to working every show on every tour with good workers, which is something the “off the street” NXT recruits badly need, as working out in the controlled setting of the WWE Performance Center helps with fundamentals (similar to working out in the NJPW dojo), it’s working in front of crowds with more experienced workers that has been the key to development & improvement in wrestling since forever. Tama Tonga is a guy who I will constantly preach needs a push until he actually receives one. He’s another dude who has shown steady improvement over the years, and has reached a point where it is all coming together for him, as he has found himself both as a worker and with his character work.

Hall escaping a Sakuraba leg lock attempt (as if) early in the match rubbed me the wrong way, but later Sakuraba tapping Hal ended up being finish. I really enjoyed this. All six guys brought something to the table, and Okada has turned into quite the trios match performer this year. Unlike a lot of NJPW stars, he tends to show up every night regardless of the position on the card or importance of the match. Maybe that has something to do with his age and his body hurting less than some of the others. ***1/4

Very good match between evenly matched teams, with great build and escalation. This was like watching a good MMA fight where neither fighter has a real edge and you’re just waiting for one guy to catch the other with a knockout blow. In this case, it was reDRagon, who eventually hit Chasing the Dragon to retain the titles and continue their run as the most prolific team in the history of NJPW, as they move to 29-1 in straight 2 vs 2 tag team matches, having not lost in that scenario since dropping a junior tag title challenge in their NJPW debut (against these same Time Splitters) at the 2014 G1 Finals in Seibu Dome. Overall, including NJPW/ROH joint shows and multi team matches, their NJPW record is 32-5, but it should be noted that the one and only fall that they’ve dropped was in the previously mentioned debut, as the other four loses were multi team matches where they weren’t involved in the fall. That’s some serious booking protection and an incredible run of kayfabe success when you consider the hot potato nature of the junior tag titles.

The Splitters shook hands with and presented the belts to the champs in the post match. Roppongi Vice showed up, and like the wacky pranksters they are faked a handshake, and left reDRagon laying, including hitting their Strong Zero finish on Fish right on top of his own tag belt. reDRagon is very good at running through a lot of spots without ever having it feel like a spotfest. ****

This was even better than their excellent G1 match, with a long Fale beatdown segment to start things, and three spots that genuinely had me kinda almost sorta fooled on the finish (Fale’s sit down splash, the second Bad Luck Fall attempt, and the Grenade with the super late 2.999 kickout by Tanahashi).

For all of the shit he takes, Bad Luck Fale is having a sneaky good year. Yes, he still puts up plenty of stinkers, and his good matches have obviously had a lot to do with the caliber of opponent (Okada and Tanahashi in particular, and Tanahashi was really good here), but output is output, and at the end of the day he’s got a nice little collection of excellent singles matches under his belt. He’s also an underrated tag wrestler who has done nice work teaming with guys like Tama Tonga and Kenny Omega, producing good under the radar house show matches against Okada & Gedo. With the added weight and methodical pace to his offense, his matches have a very different feel than the rest of the roster, and Fale has become reliable in the role of the monster road block in the way of babyfaces who need a month or two diversion from their ultimate direction. This is what they always wanted him to develop into, and he has. ****1/4

Spectacular match. A major critique of some of the previous matches between these two was that the bouts featured amazing closing stretches, but dry opening two thirds that couldn’t match the final act. This was the match where they put it all together. The selling in particular from both men was pretty great, especially Goto’s woozy wobbly legs after all of the blows to the head. The closing act was the best they’ve put together yet, with counters calling back to the previous matches and incredible drama with believable near falls/taps since the outcome of the bout was genuinely a 50/50 call coming in. Ultimately, Goto was successful fighting off and countering the cross arm breaker, but Nak hit one too many Boma Ye’s and regained the title. Karl Anderson made the next challenge, based on his G1 victories over both Nak & Goto. Anderson back in a major singles match is something many fans have desperately wanted to see, and as an added bonus it also spares us another mediocre heavyweight tag title match at King of Pro Wrestling. ****1/2 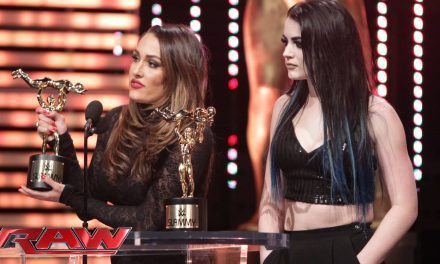