The show opened with Dixie standing in the ring with The Wolves, Lashley and Bram, surrounded by the rest of the TNA roster at ringside while Drew Galloway made his entrance. Drew gave his “Stand Up” speech before Dixie said that as a reward for last week the five members of Team TNA will face off tonight for the right to face EC3 for the World title at Bound For Glory. Dixie called out Eric Young. Young said he has an ironclad contract so Dixie can’t do anything. Dixie said she can’t do anything about it but she couldn’t make promises about anybody around the ring. She then introduced Chris Melendez and booked Young vs. Melendez in a Lumberjack match.

Young dominated most of the match before Melendez made a comeback. Young poked Melendez in to eye and struck him with his prosthetic leg. Young placed Melendez on the top but Melendez pushed Young off the top and hit a missile dropkick to pick up the win. Considering Melendez wrestled this match without his prosthetic leg, this was remarkably fine. Melendez reclaimed his leg and celebrated with the lumberjacks. Hopefully this feud can be left in the past from here as this was a perfectly acceptable payoff. Stick Melendez in a team with Anderson or something. *1/2

I have no idea why this is a title match (a running theme on this show). Jade has never won a singles match on Impact or PPV, and the last time show was on the winning end of a tag was May. This match would have been literally no different at all had it been non-title. Gail Kim vs. Awesome Kong will be the Knockouts title match at Bound For Glory.  Jade jumped Kim before the bell but got caught with a hurricanrana. Jade reversed a roll up into a German and took control. Gail made a comeback and locked on a ringpost Figure Four. Jade escaped Eat Defeat and countered a rana attempt into a sitout powerbomb for a nearfall. Jade missed a missile dropkick and Kim followed with Eat Defeat for the win. Fun little match, I’d like to see them with more time. The Dollhouse attacked Gail after the match before Madison Rayne and Velvet Sky made the save. The Dollhouse and The Beautiful People brawled to the back. Awesome Kong then made her way to the ring and stared down Kim as they plugged their Bound For Glory match. Simple, effective angle set to the backdrop of a needless title match. **1/2

Kenny King (who didn’t even get an entrance) is fresh off being squashed by Bram a few weeks ago. So naturally he’s getting a title shot. You know, thinking about it he never did get a rematch when Spud beat him for the title (and hands up who remembered King was X-Division champion back in May because I barely do) so maybe that’s what this match is. King overpowered Uno in the early stages before Uno came back with his superior speed and flippy skills. King cut off a springboard attempt with a spinning kick for a nearfall. Uno hit a crossbody and an enziguri for a nearfall. King hit a Catatonic into a backbreaker followed by an exploder suplex for two. King scored another nearfall off a spinebuster. King missed double knees in the corner, and Uno followed with a tornado DDT and a springboard frog splash for the win. Basically the less ambitious Uno is the better he is. This was a lot of fun for the time they had. It was also the second straight match where Uno looked good. ***

Spud fired up at the start, taking it to EC3, before EC3 took control. Spud made a comeback punctuated by a flip dive to the floor. EC3 hit a big powerbomb but Spud kicked out. Spud hit a couples of enziguri’s but EC3 cut him off with a TKO onto the knee and followed with a One Percenter to retain. The match was pretty good but it felt like a waste of the Spud/EC3 rivalry to throw it out on TV as a pretty short match solely to serve as a backdrop for EC3/Hardy drama. In fact, it is extremely silly that the last few weeks of TV have been building toward an EC3/Jeff Hardy match that isn’t happening. It’s a pretty bizarre choice considering they clearly knew Jeff wouldn’t be healthy by Bound For Glory. Spud was used here as a cog in a wheel turning toward a match that isn’t happening. And because they’ve spent so much time focusing on EC3 vs. Hardy any alternative feels like a rushed substitute. **1/4

James Storm was in the ring running down how much of a gigantic failure his Revolution has been. Seriously, the stable has existed for over a year now and achieved absolutely nothing, aside from maybe making James Storm significantly less interesting. Abyss had enough of Storm’s nonsense and declared himself an independent man. Abyss talked about he gave his body to TNA (which really is true) and that if Storm ever touches Abyss again he will destroy him. Abyss tendered his resignation from The Revolution. Manik stood up to Storm, said Storm didn’t make Shera and he didn’t make Manik either. Manik removed his mask and walked away. Shera then made his way to the ring and said he’d fight Storm right now. Storm said they only fight on his time and left. Storm’s horrible band of misfits has finally crumbled and not a moment too soon. Everybody involved has been sinking for months.

Bram and Galloway faced off to decide who the better man with long hair and a beard is. The Wolves tried to double team Bram but Bram countered with a double suplex. The Wolves hit double suicide dives on Drew and Lashley before eliminating Bram with a series of double teams. Lashley held up Davey with a delayed vertical despite Drew and Eddie trying to interfere. The Wolves locked Lashley and Drew in submission moves. I really like how The Wolves were totally dominating this match as a unit. Too often in these kinds of matches do they talk about the advantage a team has but you never really see it, whereas here Lashley, Galloway and Bram weren’t able to get going working as individuals against a team. Of course right after I say all of that for some reason The Wolves decide to face off against each other while there are still two other people to be eliminated. Get rid of Lashley and Galloway and then face off. Lashley Speared Davey and Galloway Future Shocked Eddie and both were eliminated. At least the psychology remained somewhat sound there with Davey and Eddie being punished for their hot-headed need to compete with one another. Lashley and Galloway were the final two. Drew hit a top rope clothesline but then walked into a Lashley clothesline. Lashley hit a running powerslam for two. Lashley hit a German followed by a belly to belly. Lashley missed a Spear and Galloway hit his flying boot for the win. This was a really fun match, and unlike most of the title matches on this show Drew actually earned his shot at EC3. The Bound For Glory main event will be Drew Galloway vs. EC3. ***1/4

EC3 closed the show by firing Jeff Hardy for failing to follow orders.

Final Thoughts: Decent show with some fun wrestling, even if the build to Bound For Glory is still somewhat questionable. Even after Galloway won number one Contendership on this show the focus was still on EC3 and Hardy. On the plus side the top matches at Bound For Glory (The Wolves vs. Myers and Lee, Kim vs. Kong, Ultimate X and Galloway vs. EC3) look really solid. 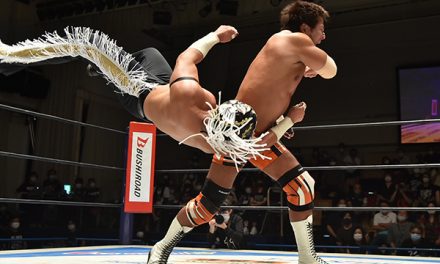