You can catch up on post-G1 New Japan event with @DoctorDala, as Ru brings you all the happenings of this month’s NJPW World Road To Destruction events!

The last time NJPW came to Okayama was last year’s Destruction, taking place one year ago today. The crowd last year was larger, albeit in a different building, seeing 3,600 in the arena compared to the 3,160 this year. Count our blessing, though, folks, as tonight’s NEVER Openweight main event of Togi Makabe vs Kota Ibushi sure does blow away last year’s NEVER title match… Yujiro Takahashi vs YOSHI-HASHI.

Manabu Nakanishi was a beast in this match, often times requiring two opponents to slow him down. Sometimes, two couldn’t even stop him. He needed to be that beast, too, because he was getting no help from Tetsuya Naito in this lowly 8-man opener. Naito’s reluctance to join the match directly led to the finish, as I think we all saw coming. With Jay White looking to make a tag, Naito refused, and Yuji Nagata turned White around into a Backdrop Hold for the win. Afterwards, Shibata and Naito faced off with eachother, with Shibata looking serious as ever while Naito smiled. Naito, however, went one step too far. Smiling, Naito spit in Shibata’s face, sending Shibata into attacked mode that slowed only when all of the young lions and the referee separated the two. **1/2

Sometimes I have this perception that Bobby Fish is one of the bigger Juniors out there. A heavyweight type that wrestles in the Jr division because of his style. However, when I see him in the ring with both Jushin Liger and especially Mascara Dorada, he’s the smallest one in there. O’Reilly and Fish were coming off a few shows with Ring of Honor, missing the entire Road To tour up to this point. Although reDRagon are the IWGP Jr tag champs, this match was non-title. That didn’t change the expectations for the result, however, as this was clearly a tune up match for reDRagon’s title defense on Sunday. With KUSHIDA dropping the Jr. Heavyweight title later in the show, I’d put reDRagon’s reign in serious doubt now coming out of Destruction in Kobe. **1/2

Steve Anthony came to the ring, during the introduction by R. Bruce Tharpe, wearing a black felt-looking cape and a Spartan helmet. The whole ensemble looked pretty low budget. Good on Anthony getting back here to NJPW, even if it was just to drop the championship so Tiger could defend against Liger down the line. The best, albeit most predictable, moment was Bruce Tharpe’s tantrum afterwards when realizing his man did indeed lose. Tiger Mask won a slow match via an armbar to win the title. This is Tiger Mask’s second reign as NWA Jr. champion. His first reign ended back in 2007, as Mike Quackenbush defeated him for the belt in FIGHT SPORTS MIDWEST. Can’t believe that is almost ten years ago. **

Tama Tonga taking the fall here is one of the biggest no doubters of the show, with Tanahashi getting the win before his singles grudge match with Bad Luck Fale on Sunday. Matt Sydal is an exciting presence in NJPW, which is the complete opposite of Juice Robinson. Juice, by the way, was supposed to be in this match, which originally was scheduled to be a six-man. However, due to Yujio Takahashi being out, Cody Hall was moved to up the card and Juice was the odd man out. It was better this way, as a more focused tag match really was preferred to another Tanahashi six-man tag. With Tonga and Fale being a more regular team, they worked well together and toyed around with Sydal and Tanahashi early. The finishing sequence saw Sydal land his awesome Shooting Star Press, which the crowd loudly gasped at, followed by the High Fly Flow for the pinfall. This was a fun match that gave us a window into the excitement Sydal will bring in the Jr division, excitement that those who have followed Sydal for the last decade knew he’d deliver. ***

Darn, darn, darn. DARN YOU SEX FERGUSEN. No title change here, as the Bullet Club retained the tag titles in just over thirteen minutes in what actually was a fun, exciting match. Exciting for me, probably, because of the anticipation on a possible title change. Doc worked hard, he seemed to be more energized in the ring than usual, and the energy flowed throughout. Chad 2 Badd was his usual solid self, and without a Maria to distract him, focused on the match and that made all the difference. As for Kojima and Tenzan, while they were noticeably tired and worn midway through to the end, they pulled off their part and this was overall a successful presentation. It was, indeed, the best match of the night so far! ***3/4

We’re almost to the good stuff! If you wanted to see more of Ishii and Honma, you got it. If you wanted to see Alex Shelley back on a big stage after his injury, you got it. We also got some big hoss battle between Ishii and Goto. Overall, a fun match ending with Captain New Japan being Captain New Japan… which is to say, a loser. CHAOS will be back in the multi-man tag game on Sunday. Alex Shelley breaks away, of course, to challenge for the Jr tag titles with KUSHIDA on Sunday. It was a fun post-intermission match, but with the abundance of tags on this show, they get old quick no matter what personalities might be in there. **3/4

AJ Styles is a pleasure to watch. AJ Styles vs Kazuchika Okada is more so. These two guys are wrestling soulmates that somehow reunited after a missed connection. In this case, TNA. Once the Yanos and the Halls get out of the way, their title match in October at King of Pro Wrestling is going to be amazing. I’m calling it now — AMAZING. Going under ten minutes, and featuring a lot of Yano and Hall in the ring, we only got a taste of Styles and Okada. We need to be a bit patient, as we’ll get a much larger amount of it soon. Hall served himself well in the match, and seems to be getting more instinctual in the ring. That’s a positive, as it has been one of his greatest drawbacks. He just doesn’t look like he knows what to do a lot of the time, but he was better here. Styles and Okada’s interaction with each other was the highlight here, but we didn’t get enough of it. ***

With one of the more contrived and visually WTF distract-the-ref spots you’ll see in NJPW, the Bullet Club took turns beating up on KUSHIDA at ringside while Omega watched on. The help backfired, though, as Omega went for a flying senton from the ring to the floor as the Club was holding KUSHIDA. Escaping was KUSHIDA, causing the inadvertent taking out of the Club at the hands of Omega. It was the mix of high flying, Bullet Club interference, and KUSHIDA quickness that you’d expect, all in one fluid spot. In what may have been some foreshadowing to the result, while also reminding us about the TimeSplitters, Alex Shelley came down to try and even the odds out a bit. He got involved in the match, helping his tag partner take out the Club with some tag team moves. The Club still got the better of the TimeSplitters, though, as Omega pinned KUSHIDA with the One Winged Angel after a Gun Stun from Karl Anderson. ***1/2

Before today’s Destruction event took place, some of the VOW contributors and I outlined what we expected to see in the results. In what I thought was the biggest slam dunk on the show, I thought KUSHIDA would defeat Kenny Omega again to really cement in this Jr. Title reign. Well, I was wrong. As was Rich. As was Damon. As you were, probably, because did anyone think KUSHIDA, after all that hype and emotion coming from his title victory, as well as the potential challengers coming his way, was going to lose in his second defense? He has now only successfully defended the IWGP Jr. Heavyweight title once between his two title reigns. One time. Against Ricochet, a non-NJPW regular. Something’s up. The title change does allow KUSHIDA and Shelley to go after the Jr tag straps, though. This loss for KUSHIDA, to me, outlines a TimeSplitters tag title win quite clearly.

After the match, Kenny Omega cut a promo on Matt Sydal in his epic villainous style. Omega said “at the next show,” it will be Omega vs Sydal for the Jr Heavyweight title. Now, that must mean King of Pro Wrestling, and unlikely to be Sunday’s Destruction in Kobe. Then, things got awkward. Omega asked for his music, but no music played. Omega asked for his title belt, but no belt was found. Matt Sydal was still making angry face reactions outside the ring at Omega’s words, when Omega flatly said, “Well, this is awkward.”

Makabe has consecutively held the NEVER title now longer than anyone else since the original champion, Masato Tanaka, held the title back in 2012-2013 for 314 days. That reign continues, as Makabe disappointed the Golden Star superfans by defeating Kota Ibushi in the main event of Destruction in Okayama tonight. You know the drill. Slow going early, with a quicker pace as we go along, with Ibushi leading the charge against the slower and more powerful brute. There was a sick Ibushi reversal into a deadlift German that I have GIF’d here. Ibushi, cocky late as he gained control, failed immediately afterward with a corkscrew splash from the top, giving Makabe the time needed to recover a bit and even himself back up with Ibushi. Makabe finished off Ibushi after a King Kong Knee drop, successfully getting Ibushi on the mat, beaten, to nail the finisher. The match was slowed when needing slowed, quick when called for, and a well paced affair in contrast to an all out sprint. Makabe’s reign is for real, and Ibushi quite possibly ends his year with the New Japan Cup victory, but failing in individual title matches. **** 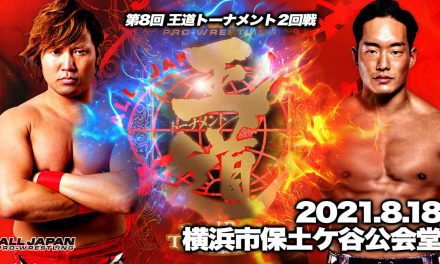