Jeremy Borash opened the show in the ring and brought us up to speed on the history between Dixie Carter and Jeff Jarrett before introducing them both for a contract signing for the main event. The winner is sole owner of TNA. It would be funny if TNA brought Jarrett back to get him to do this segment, only to reveal the contract was legitimate. Sadly such a ploy would be unlikely to hold up to legal scrutiny. Dixie was upset that her relationship with Jarrett had to end like this but she will remain dedicated to TNA no matter what. Jarrett cited Eric Young’s betrayal of TNA last week as a lack of confidence in Dixie. They covered the same ground they have in the last few weeks, Dixie is upset Jeff bailed and Jeff is upset that Dixie replaced him. Both signed the contract. Jarrett decked poor JB and left. Fairly standard hype for the main event, mostly just bringing forward all the story points to date. They aired a few hype videos for the main event throughout the show – the kind of stuff that should have filled the programme for the weeks before the blow off match actually aired.

Abyss’ entrance seems considerably less impressive without his old pyro. Shera danced his way to ringside including dancing along with bigfoot, or at least a person in a bigfoot suit. There’s some…interesting corporate synergy for you. Abyss dominated Shera. Shera working singles matches for no reason is extremely short sighted. Especially against somebody like Abyss at this stage of his career. He’s a functional wrestler, not particularly good, but he should be protected in tags until there’s a reason for him to work singles (and especially against somebody like Storm who can carry him). Abyss got Janice from under the ring but missed. Storm tried to interfere but he hit Abyss by accident. Shera beat Abyss with the Sky High. 1/2*

EC3 came to the ring and introduced Jeff Hardy, insisting he go without music again. Hardy was dressed in a suit with EC3 faces on it, holding the cardboard cutout of EC3’s head. He looked rather ridiculous. EC3 forced Hardy to demand the crowd stop chanting his name, which naturally spurred the crowd to chant Hardy’s name louder. EC3 gloated for a while before Rockstar Spud made his way to the ring. Spud noted that he knew how Hardy felt, being EC3’s subservient assistant. Spud felt Hardy was above such a role. Spud said EC3 was garbage compared to Hardy. EC3 struck Spud with a microphone and went to leave. Spud attacked EC3 but Tyrus dropped him like he did so often in the good old days of January. EC3 demanded Hardy hit Spud and Hardy obliged, but was upset about it. Again it continues to look as if they’re building toward Hardy vs. EC3 at Bound For Glory. Spud apparently will now get a totally unearned World title match next week. That feels like a match that should mean MUCH more. Spud challenging for EC3’s title should be much more important than a backdrop to silly Hardy/EC3 drama.

Only Brooke got an entrance. There was no mention that Tapa used to be Kim’s bodyguard. Kong and Tapa faced off. Brooke, Gail and Kong teamed up on Tapa and dumped her from the ring. Kong hit a splash off the ring apron onto Tapa before Kim followed suit onto Kong. Brooke took out Kim with a crossbody off the top to the floor. Brooke and Gail had a really fun exchange while Tapa and Kong battled on the floor. Tapa blocked a corner charge by Kim and dropped her on her face. Tapa hit Kim with a superplex but Kong came off the top with a splash. Brooke dropped an elbow on Kong and all four were down. Brooke and Kim threw Kong and Tapa from the ring, and Gail blocked a roll up attempt with a pin to pick up the win to become Knockouts champion for a fifth time. Interesting to note Kim and Kong basically didn’t interact here. It’s a shame Brooke was nothing but a transitional champion because she looked good again here. It probably would’ve made more sense to move the title straight from Terrell to Kim instead of the pointless Brooke reign. This match was a lot of fun when Kim and Brooke were in the ring, while Tapa and Kong wisely picked their spots and worked hard. ***

Poor Trevor Lee and PJ Black got dumped in favour of Eric Young. Jarrett just added Young to his team after the contract was signed, because that’s how contracts work apparently, so it was unknown who would be TNA’s final competitor. They were playing it up as if TNA might not be able to get anybody. Is Bobby Roode a little too busy? How about Drake, Robbie E, Godderz, Uno, King or Micah? They were looking to fight for TNA last week.  Sonjay Dutt had his old TNA music because apparently they realised how awful his GFW music was. Dutt and Richards started and did very little of note until Young entered next. Next out was Drew Galloway, a poor tactical move on Drew’s part in my opinion; wouldn’t you get the regular team out there as soon as possible?

Myers had entered during the break. Lashley was the next entrant and finally some life! Lashley hit Dutt and Young with a Spear each and followed with a delayed vertical on Myers. Mordetzky was the next entrant for GFW followed by Eddie Edwards. The thing about these matches is the opening stage is essentially a series of hot tags, and the match is only as interesting as the latest babyfaces hot tag (so lots of fun when Lashley is wrecking guys and The Wolves are running wild but otherwise a lot of waiting for the next guy to come out). Also too often it just descends to nondescript brawling because the ring fills up to much. Jarrett is Team GFW’s final entrant. TNA’s fifth surprise entrant was Bram. The roof lowered and Lethal Lockdown began!

Team TNA dominated for a little while but GFW got the weapons and took over. Dutt and Myers missed Galloway with double superkicks and accidentally hit Mordetzky. The Wolves hit Dutt with an Alarm Clock. Lashley hit Mordetzky with a Spear and Team TNA surrounded Jarrett who tried to escape out the camera hole screaming “Don’t let them take me!”. Team TNA destroyed Jarrett for a little while. Everybody hit their move before The Wolves hit Jarrett with a double Van Terminator. Galloway hit Myers with a big boot followed by the Future Shock on a trash can giving Team TNA the win. The TNA/GFW feud ended as it existed – perfectly fine but nothing particularly memorable. This match picked up after the roof came down but the opening stages were a little dull. Lashley Spearing everybody will never not be fun though. I really like Lashley. ***

Final Thoughts: A straightforward, fun second hour made up for a scattered, uninspired first. Impact is always much more watchable when it’s streamlined like this though – the longer segments make it a much more pleasant viewing experience. Now we have two weeks for TNA to rush together a card for their “biggest show of the year”. 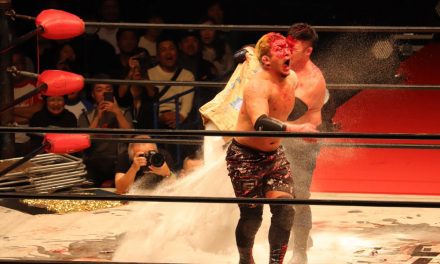