Find the rest of Voices of Wrestling’s Wrestling Observer Hall of Fame articles and podcasts at https://www.voicesofwrestling.com/category/columns-2/2015-won-hall-of-fame/

You know you’ve been a wrestling fan for a long time when wrestlers you’ve watched since day one become eligible for the Observer Hall of Fame. It’s great in the sense that you have a full grasp of a wrestler’s career during the era it took place, although it’s bad in the sense that it means your best years are clearly behind you, and you spent many of those years thinking about wrestling way too hard.

Anyway, there are some interesting candidates this year, but the one I’ve thought about the most is CIMA from Dragon Gate. So let’s break this down by asking some questions.

Was he a good wrestler?

I would call him very good, good at minimum. No one really talks about him as a worker, and his matches never really got hyped. As a singles worker, he had big title matches I enjoyed, and others that I thought were the dictionary definition of overkill. He’s had dozens (hundreds?) of good tag and trios matches, but it’s hard to single him out in these situations.

Weirdly, for a modern candidate and someone who wrestled in Dragon Gate, in-ring work really doesn’t play that much of a factor in his candidacy.

Was he a draw?

Yes. He was the face of the promotion as they grew from scratch (which is a key point) to the #2 group in Japan. He has ten main events at Kobe World Hall, and when he wasn’t in the main event he was often in key matches. At the company’s first Sumo Hall show, his match against Yoshino garnered a lot more interest than Naruki Doi vs. Koji Kanemoto. And he was second from the top against Dragon Kid at the 2009 Dead or Alive show, and believe me people weren’t beating down the door to see Doi vs. Akebono.

I would say yes. The Dragon Gate style he was at the forefront of has seeped into junior heavyweight wrestling not only in Japan, but certainly on the U.S. Indies (more on that in a second). You can argue if this was good or bad, but you can deny it’s made a mark.

Has he won titles?

He’s won all the titles. Of the four main Dragon Gate titles, he has a combined 20 reigns totaling more than six years (including a mammoth 19 month run with the Dream Gate title). It’s rarer that he doesn’t have a belt around his waist than he does. That doesn’t even get into tournaments, leagues, and stipulation matches. Bottom line, he wins a lot.

How is he viewed in Japan?

I’ve been watching CIMA in Japan since I bought a copy of “Toryumon Comes to Japan” off of EBay (my preferred puro source for several years, for some reason). I watched the days of Crazy Max, the amazing El Numero Uno tournament in 2003, and his epic 19 run as the Open the Dream Gate champion. I feel like I have a good grasp on his career. But Dragon Gate isn’t made with me in mind. I’m not in Japan, I’m not attending the shows, I’m not reading the magazines, and I’m not buying merchandise. Is it possible I’m missing something?

To find out, I asked Dragon Gate Jae, who not only exhaustively covers Dragon Gate at IHeartDG.com, he’s been to DG shows in Japan, and for all I know he’s in a fantasy football league with CIMA. Here’s what he had to say:

“Heart and soul, the face, the backbone, any superlative you want to use. It’s the same for Japanese fans.”

So there you go.

How did he do outside of Japan?

Early in his career, CIMA had brief runs in Mexico and WCW, where he faced grappling greats like Ernest “The Cat” Miller.

But he had a several year-run where he was a major player on the U.S. Indies. He was a part of the Dragon Gate six-man from Ring of Honor’s Supercard of Honor

, which was awarded five-stars by Dave Meltzer and won the Observer MOTY that year. He won the 2007 Battle of Los Angeles

. He was a huge part of Dragon Gate USA, which was a successful independent for several years. But mainly he was part of a style that had a huge influence on wrestling in the independents. The independents would look a lot different without DG.

8. When I saw him in 2012 for DGUSA, I thought it was cool as hell to see the guy who went to the 2000 J-Cup finals against Jushin Liger live. I should also point out (a) I likely place a heavier emphasis on seeing wrestlers live than most, and (b) I gave Ebessan a 10 when I saw him in Ring of Honor.

How have his peers done in the Hall of Fame?

No one else from Dragon Gate has been on the ballot, nor does that seem likely to change anytime soon (you could make a case for Masaaki Mochizuki, but that’s a stretch). If anyone from DG is going in, it’s going to be CIMA.

His closest peer in the Hall would be his trainer, Ultimo Dragon, who happens to be the worst guy in the Hall. Worse, Gran Hamada was an even better candidate them CIMA (especially when you factor in influence), and he couldn’t get the necessary 50% to stay on the ballot. If he doesn’t go in, should CIMA go in?

I’ve often warned against the dangers of thinking “Wrestler X made it into the Hall of Fame, so wrestler Y should be in as well.” It starts a slippery slope, and soon you can make excuses for anyone to be in. But isn’t the inverse true? If you think “Wrestler X didn’t make it in, so no one worse than him should go in,” aren’t you denying potentially worthy candidates? Yes, in a perfect world Wrestler X would go in, but it’s not a perfect world, and keeping worthy people out doesn’t seem like the answer.

Will he go in?

I asked Jae for his thoughts:

“I don’t think he will get in because of the general opinion of Dragon Gate that exists amongst the old guard in Japan and in general in the rest of the world. It’s still seen as flippy floppy shit that is only the number two by default. The fact that some people somehow consider DDT to be the #2 in Japan proves that.”

I agree with that. There are some big new names this year (Shinsuke Nakamura, Daniel Bryan, Samoa Joe and Randy Orton) on an already bloated ballot. It’s fairly easy to see CIMA falling through the cracks, which is a shame.

Should he go in?

Again, I’ll turn to Jae (who probably deserves a co-author credit at this point):

“He should be in because he was the ace and top draw for a company that has been attracting large (not huge) crowds consistently for his entire 16 year run. He was the standard bearer for a style that influenced the 2000s in numerous ways, not the least of which was making ikemen junior heavyweights into a viable business model. Should anyone else from DG ever go in? Probably not, but CIMA absolutely.”

Personally, I don’t have him on my mock ballot right now, but that’s more of about trying to get lucha guys in than any sort of reflection on CIMA. I think he’s a worthy candidate that at least deserves close consideration. 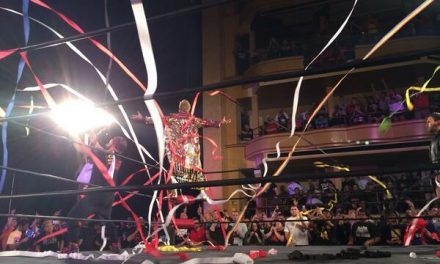