Did you know last week’s WWE SmackDown had the lowest amount of viewers in SmackDown history? That’s right, a record-breaking SmackDown! Go read the review and see if you can figure out what went wrong, and then read Brandon Howard’s frighteningly in-depth piece about wrestling TV viewing figures and what it all means.

In fact, the ratings were SO bad, that this week, Jerry Lawler has been reduced to teasing his own on-air death just for that cheap “snuff movie” pop:

3 years ago today I kicked the bucket on #Raw! Will it happen again tonight on #SmackDown? Tune in and see! Now there's a tease! @SyFy

“Roman doesn’t care about any single one of you”

Bray opens the show en famille, and cuts a promo about how Roman Reigns is secretly a master manipulator, a much cannier man than we all give him credit for. Every time Wyatt repeats “Roman is a very smart man,” a little bit of my week’s reserve of Suspension of Disbelief evaporates. A handsome man, yes. A strong man, definitely! Smart… I’m not convinced, even by spooky cult leaders in atmospheric lighting.

He then proceeds to describe Ambrose, in comparison: “He is missing more than a few pieces upstairs,” Bray says, which is a much more sensitive euphemism than commentary have ever come up with. It seems that the new perspective on the Shield boys that Bray is claiming, is that Roman has cynically led the weaker, more vulnerable Ambrose astray, through charismatic guidance. If you dig a little deeper here, Wyatt is holding up a mirror. He’s describing himself, and his “brothers”, not Dean and Roman. He can’t imagine that two people would want to stick together as equals who care about each other. It’s basic bad-guy logic, and it’s the most sense Bray has made in ages.

Cesaro vs The Miz

There are sometimes brief moments it crosses my mind that perhaps all the Cesaro hype is a tiny bit unjustified, and we’ve all just got swept up heaping praise upon him. Then there’s moments like the opening few seconds of this match, where Cesaro does an exaggerated sarcastic “removing sunglasses” taunt and then proceeds to ferociously double stomp the Miz in the stomach, and all doubts dissolve. The predictable targeting of Cesaro’s taped ribs is a bit boring, because Cesaro is much more interesting when he’s throwing people around than when he’s selling — but I suppose it’s the only realistic way that Miz could get any offence in. Anyone else substituted for Cesaro in this exact match would have been a damp squib of an opener, probably sub one star, but as it is, it’s an enjoyable, spirited five minute bout.

Rarely, this is a RAW rematch that ends with a more definitive finish, as Cesaro gets the win with the Tyson Kidd Tribute Sharpshooter.

Both teams escort their wrestler to the ring, but quickly get ejected by the ref for getting pushy before the bell rings. At least this makes this a true singles match where there’s a ghost of a chance of a clean finish. This starts out like a pretty standard bout between these two, albeit nowhere near them at their best — Paige hasn’t been at her best for months now — but then disintegrates into that particularly unpleasant WWE flavour of cat-fight, where they’re rolling around together, tearing at each others’ hair extensions. Fighting like jilted ex-girlfriends on Jerry Springer rather than the skilled athletes that they are.

Some over-enthusiastic and inconsistent reffing here — eg, “checking if Paige is physically able to continue” after a pretty standard slap to the mouth — foreshadows a screwy finish, and things get even weirder when a new ref is called out just because their tussle spills to the outside. The two referees paw at the girls to try to tear them apart, but the bell hasn’t rung, and they haven’t broken any rules: why not let them carry on the match? The whole thing is inexplicable. After this, the rest of the women’s respective teams run out to join in, and everyone piles in the ring to pull hair and scratch and slap each other, while Booker T yells “This is the revolution I’m talking about right now! A real Divas’ revolution!” and I slide further and further down in my chair until the match is totally obscured from my vision and I can pretend it’s not happening.

A no contest, I guess? The bell never rang…

While Jimmy Uso being on commentary for the past eight weeks of SmackDown didn’t have the instant empathy building effect of, for example, the Finn Balor short documentary serialised on NXT, I’ve found myself rooting for him in spite of myself. Every Thursday without fail, he’s been there with his reactions, enthusiastic yelpings of “Uce!” and wistful musings on the tag team division. It’s been an extremely slow burn Redemption of Jimmy Uso plotline, which I personally think should culminate in him winning the WWE Heavyweight Championship at Night of Champions, but I appreciate that booking may be too bold for current WWE. Instead, the triumphant return of Jimmy Uso comes in the form of playing gooseberry to the Broken Shield boys. In a backstage scene before this match, Ambrose insists to Reigns “he’s your blood, so he’s my blood” and if you’re not heart warmed by that, I don’t know what to tell you. Jimmy’s enthusiasm is infectious, and his face paint is lurid, and he’s ready to go.

This match is predictably super-fun, with Ambrose looking like he can actually be bothered to be there, for a change; Big E deflecting aggressors just by flexing his pecs, and Jimmy Uso being genuinely thrilled to be in this match and having a great time. Despite Woods being a legal participant in this match, he can’t help but multi-task, and retrieves his trombone from the timekeeper for the obligatory corner-stomp spot. Will this ever get boring? I’m not sure it possibly could?

Xavier runs straight into a Superman Punch and is lying flat out, as Jimmy Uso is poised for the hot tag, but then there’s the trademark Wyatt blackout. After the lights go back up, the Wyatts are standing menacingly by the tron, and Jimmy Uso is dangling helplessly from the chokehold of Braun Strowman. As much as interference finishes are trash, this was actually pretty impressive, because I mean, Jimmy was right there, I saw him…

The Ascension vs The Lucha Dragons

The Ascension are accompanied by their new overlord Stardust: so we’ve got watermelon-patterned dragons vs mystical cosmos cronies. The Ascension got the win in under two minutes with the Fall of Man — which was a bit weird — maybe Stardust used his powers over space and time to transport us back to 2014 NXT? After the match, the Cosmic Wasteland pile in to kick the scales off the hapless Dragons, but Neville dashes out to protect them. This plotline is silly and cute, and while it has Neville treading water somewhat, at least it isn’t damaging him at all as a credible character or as a wrestler. He seems to be the lone man keeping his head amongst this ridiculousness. Neville is the protagonist of the SmackDown midcard.

This is my lumberjack match review debut, and I have to say I’m equal parts thrilled and nervous.

SmackDown needs more of this fluffy nonsense. Now it’s been proven beyond a shadow of a doubt that there’s no risk of quality of wrestling being a factor on SD, let’s just aim for quantity of wrestlers.

Rollins claims he requested this match, so he can “show those doubters in the locker room firsthand that Ryback can’t beat (him)”, which seems characteristically foolhardy, being that Rollins has a tendency to lose everything, all the time, in increasingly embarrassing fashions.

The poor defeated Lucha Dragons from literally five minutes ago are here in lumberjack capacity, which is hilarious. I like lumberjack matches probably for the wrong reasons: I’m obsessed with the little fake conversations the wrestlers at ringside pretend to have amongst each other, and I’m also fascinated by which ones opt for ring gear and which are in some sort of casual daytime outfit. It’s like there’s not really any rules, you’re just told to turn up and do your best. A nice thing in this match, that you can’t take for granted, is that they do use this opportunity to further a side plot: and that side plot is Kevin Owens.

The actual in-ring action is good: Rollins keeps things fast enough to not get boring, taking dramatic bumps and going for daring highspots at every opportunity. For some not clearly explained reason, Big Show starts indiscriminately throwing KO punches halfway through this match, and then storms off in a strop. After that, everyone gets angry with each other and starts fighting amongst themselves, before the heel lumberjacks decide to join forces and beat down Ryback instead. Everyone, that is, apart from Owens, who just stands patiently at ringside, chewing gum, looking completely disinterested.

After this dramatic scuffle has been resolved, Rollins is left briefly vulnerable and ends up in the unfortunate position of being in a fireman’s carry on Ryback’s shoulders. Owens slides an arm under the bottom rope and tripes up Ryback, causing him to slip disastrously and drop Rollins, and then Owens just walks away. With that crucial piece of interference, Rollins has a moment of separation to go for the Pedigree, and get the win. Rollins stands tall, with both belts aloft, and Owens is still walking away, staring back from the ramp.

Final Thoughts: The triumphant return of Jimmy Uso is a great moment for anyone who’s been paying attention during the Summer of Uso, although it’s a shame he had to get murdered pretty much immediately. The main event over-delivered and teased future Owens/Rollins alliances, which could be very interesting indeed. 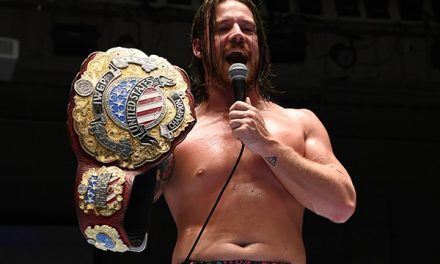