Tonight, NXT continues the tournament with the best logo in sports (entertainment), the Dusty Rhodes Tag Team Classic. Tonight’s portion of the tournament includes Johnny Gargano and Tommaso Ciampa vs. Bull Dempsey and Tyler Breeze as well as Samoa Joe and Finn Balor vs. The Lucha Dragons which, for some reason, is coming from Providence, RI. As you know, we here at Voices of Wrestling wish you the best in keeping up with NXT’s location and filming continuity.

Peyton Royce didn’t just get an entrance, she came out after Carmella! That, unfortunately, didn’t help her cause as much as we’ve been trained to expect. Royce did, however, get a lot of good offense in during her “official” debut.

If we were relying one these two to carry the mantle of the NXT women’s division right now, we would be in trouble. They do, however, show the promise and general athleticism that appears to be lacking from the Eva Marie Era. A little more fluidity and confidence in movement and both Carmella and Royce could reap big gains.

After the match, the announce team recapped a few Dusty Rhodes Classic matches from NXT’s house shows. Enzo and Cass defeated Sawyer Fulton and Angelo Dawkins with Air Enzo, also Dawson and Wilder eliminated Elias “The Drifter” Sampson (lolz) and Tucker Knight with the Shatter Machine. Also, the Dusty Rhodes Tag Team Classic has a new red, white and blue star logo. It’s vastly inferior to the original logo and should be banished to the deepest depths of hell along with Heidenreich and King Barrett’s crown.

Are Johnny Gargano and Tommaso Ciampa BULL-FIT? Also, did Dempsey go to Bowling Green University? The logo on his singlet reminds me of Bowling Green. Readers, this is where you come in, let me know in the comments or on Twitter (@voiceswrestling or @AlexWendland).

The Full Sail University crowd delayed the start of the match by chanting “Bull is gorgeous” and “this is Bullfit.” They’re good chants at face value, but we’ve only got an hour here, guys. You could occasionally cool it.

Gargano and Ciampa got the win with a surprise roll-up when Dempsey was distracted after knocking Breeze off the apron. Breeze didn’t take it too well after the match and attacked Dempsey. I guess we know who Breeze will lose to at the October Takeover.

The Lucha Dragons have a promo in which Kalisto speaks perfect English and translate’s Sin Cara’s Spanish. Both men are Americans, for the record.

Dana Brooke also had a pre-match promo in which she continued to speak slowly and, if I heard correctly, said “child please.” She spent two minutes on a 30-second promo. Please send help if she ever opens a RAW.

In between Brooke’s promo and match, we were treated to a Tye Dillinger promo that opened with a count-up to 10. The counting graphics made me think it was a commercial for a new retro countdown show on the WWE Network. Cool graphics, but the result left me somewhat disappointed.

Billie Kay got an entrance, so good for her, and she’s our second new-ish women’s competitor and they’re both from Australia. There’s something there, I’m sure, but I was distracted by Rich Brennan talking about what long legs Kay has. Outside of Brennan’s creeper comments, the NXT team is really great. Corey Graves straddles the line of color commentary and heel announcer better after six months than JBL has in six years. The only complaint, if I have one, is the glaring differences when voiceovers are recorded later on for

As offensive as Dana Brooke’s promos are, she’s pretty solid in the ring. She’s not on the level of NXT’s Four Horsewomen, but she’s the furthest along of the next batch, excluding Emma. I’m also a fan of the Chuck Taylors in the ring and it fits her gimmick, too. Brooke controlled about two-thirds of the five minute match and won with her unnamed Samoan driver.

Apollo Crews had a very short promo backstage after the match and they’re really pushing Apollo Nation as Crews’ “thing.”

Suddenly, we’re at the main event once again. This happens more quickly every week.

Samoa Joe and Finn Balor vs. The Lucha Dragons

Brennan “throws to Tom Phillips and Jimmy Uso” for the match from Providence that was clearly taped as a dark match for SmackDown. I think it’s great that NXT wrestlers are getting opportunities to wrestle in front of proper WWE crowds — even if most of the ones doing so are already more comfortable in front of them than half the RAW roster — but it is kind of insulting to try to tell me that a match is “too big for NXT” when it was obviously filmed as a dark match for the B show (apologies to Ru Gunn).

Even if this was a dark match, the crowd was really excited to see Samoa Joe and Finn Balor. Chants of “NXT” and “this is awesome” rang out before the match even truly began. Just as Balor got rolling, however, they cut to commercial. You know what that means…

THERE IS NO REASON THAT WWE SHOULD BE CUTTING TO A COMMERCIAL IN THE MAIN EVENT OF AN HOUR LONG PROGRAM ON THEIR OWN NETWORK. They own the distribution platform and the content, and there are plenty of other spots for advertisements – Dana Brooke’s promo spot comes to mind immediately.

This was a really fun TV match. Great pacing, classic tag team spots and both Joe and Balor’s finishers mesh well together as a Muscle Buster-to-Coup de Grace combo. If I had one complaint, and this is really picking the nit, it was that we were supposed to believe the Lucha Dragons were semi-equals to Joe and Balor despite both Joe and Balor’s successes outside of WWE being their selling points. Either way, this was good fun and was probably the best match at whatever SmackDown taping it opened (apologies to Ru Gunn).

Final Thoughts: The Dusty Rhodes Tag Team Classic is starting to heat up and properly take shape. The only major storyline I see so far is how far can the contract-less newcomers, Gargano and Ciampa, take their run. This is what I would consider a should-watch episode, if only of the main event match. 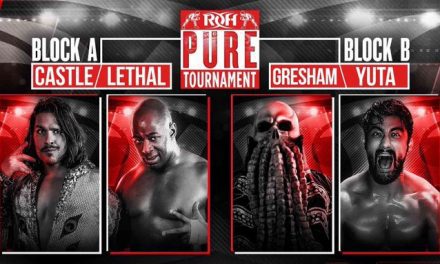