EC3 opened the show and gloated about beating Matt Hardy last week. He then introduced his new assistant Jeff Hardy. Jeff came out to his own music but EC3 demanded the music be cut off because personal assistants don’t get entrance music. EC3 gave Hardy a present — a cardboard cutout of EC3’s head which Hardy has to hold at all times. EC3 had Hardy introduce him in the most flattering way possible. Hardy didn’t seem best pleased at all this. EC3 is really very, very good.

EC3 and Tyrus vs. Matt Hardy and Rockstar Spud

Cast your minds back to the August 12 Impact. Remember when Bobby Roode demeaned Spud and then attacked him, leaving his lying at ringside. TNA don’t apparently. The reason I enjoyed that particular segment was because I felt it defined Spud character. That he was the underdog who would never give up, who no matter how badly beaten he’d keep coming back for more. Well it would appear that beating by Roode was enough to make him stop trying to fight to the end, because he’s seemingly not all that bothered by it. They haven’t interacted since and Roode was turned face. Now you would understand to a degree an oversight like this in the week to week, plans change world of the WWE. But these were bulk TV tapings. Every element of this was planned out in advance and taped at once. So in that instance there is absolutely no excuse for a segment like that Roode/Spud segment to go absolutely nowhere.

Hardy and Spud were dominating EC3 until EC3 dumped Spud over the top and Tyrus dropped him on the floor. EC3 wanted Jeff Hardy to attack Spud but Jeff refused. Spud made the tag to Hardy who got a near fall on EC3 with a Side Effect. EC3 wanted Hardy to hit Spud with a chair but Hardy refused. Tyrus beat Spud with a big spike. It looks as if they’re building toward Jeff Hardy vs. EC3 at Bound For Glory. This match was more of a backdrop for some EC3/Hardy drama. *1/2

Jeff and Karen Jarrett made their way to the ring. Josh Mathews said the next week’s Lethal Lockdown match will be the biggest match in the history of TNA. If that’s the case, then why isn’t it even on the biggest show of the year?

Anyway, Jarrett called out Bobby Roode and demanded he return the King of the Mountain title. Roode declined saying the KotM title belong to him and belongs to TNA. Karen said Roode and Jeff were acting like children. She said it would be stupid for both of them to fight. Karen said Dixie was outnumbered. Erm, by my count there are nine people from GFW invading TNA right now and there are 42 currently active members of the TNA roster. I’m not entirely certain how TNA are outnumbered. Jeff and Karen then left. I honestly have absolutely no idea what this was supposed to achieve. It did absolutely nothing. It went absolutely nowhere.

Hey look, it’s TNA’s midcard! This match came about after they brawled backstage over who would be better to represent TNA combatting GFW. I don’t know why King is being paired with the heels after he turned last week. The faces ran wild before Micah was cut off. Jessie threw his pretty sweet dropkick. Micah hit Drake and King with a double clothesline and made the tag to Uno. Uno hit a double dropkick and went up top but he got cut off. Uno hit King with a tornado DDT and made the tag to Robbie. Everybody hit their move before Robbie hit Jessie with the Boom Drop for the win. This was a fun little match. It was also the crispest Tigre Uno has looked in a while. These six aren’t world beaters but they could form the basis for a really solid midcard. **3/4

This adds to the extremely long list of title matches lately that have received no promotion at all. Title matches of any sort should be an event. For some reason Josh was trying to undermine to consensus opinion that Gail Kim is one of the best wrestlers in the company. These two had a really good match at Sacrifice 2012 (which was actually a really good show with Bad Influence vs. Magnus and Joe, Brooke vs. Kim, Aries vs. Bully, Styles vs. Angle and RVD vs. Roode). Brooke got the better of Gail early but eventually Gail took control. Brooke revered a charge into a reverse chin lock which looked really neat. Both hit a crossbody before Lei’D Tapa made her way to ringside. Brooke hit the Tess-shocker but spotted Tapa at ringside. Tapa hit Brooke with the Knockouts title to cause the DQ. Tapa laid out Kim with a TKO. Kong’s music hit and she ran off Tapa. Kong may not quite be the same wrestler she was eight years ago but she still has the performance aspect down. She still comes across like a badass. This was a really fun little match before the DQ. Kim is great and Brooke is underrated. **1/4

The Wolves started with a series of suicide dives. The Wolves hit a Falcon Arrow/superkick combo on Lee but Myers made the save. Lee took Edwards down with his flipping crossbody and the GFW delegation took over. Edwards made the tag and Richards ran wild punctuated by a superplex for a nearfall. The Wolves hit Lee with a German/enziguri combo but Myers made the save again. Myers hit a flatliner on Edwards followed by a deadlift German by Lee but Edwards kicked out. The Wolves hit the Alarm Clock and followed with the Force of Nature but Sonjay Dutt pulled the referee from the ring. Earl Hebner came out and decked Sonjay as revenge for how he was treated last week. The Wolves hit a Tombstone/punt combo to win the titles for a fifth time in 21 months. Hopefully there can be a little more substance to this reign. As usual The Wolves bring a much needed dose of energy to Impact, and Myers and particularly Lee would be useful permanent additions going forward when all the GFW/TNA malarkey is done with (simply have Dixie be a gracious winner and offer an amnesty to the GFW guys). ***1/4

Chris Melendez made his way to the ring on crutches. Melendez said he was standing on his last leg and still looking to kick some ass so he called out Eric Young. Young came out with Melendez’ leg, with “My Leg” written on it. Young took credit for taking out Kurt Angle. I assume Angle vs. Young will be a Bound For Glory match if Kurt is ready on time. Young pushed Melendez over and called him pathetic. Young agreed to wrestle Melendez again and said Melendez is never going to come back after it. I’m not a great fan of Young’s shouting lunatic act.

Here’s a fun fact, the team with the man advantage in Lethal Lockdown has only ever won once. And the heel team has never, ever won Lethal Lockdown. I don’t have high hopes for Team GFW’s chances next week. The GFW lumberjacks are Lee, Myers, Dutt and D’Amore. The TNA lumberjacks are Richards, Edwards and Lashley. They brawled for a while before Mordetzky pulled Galloway off the top and took control. Mordetzky hit a Sky High for two. Both men spilled out to the floor and started exchanging chops. Back in the ring and Galloway hit the Future Shock but the GFW lumberjacks pulled Drew to the floor. The Wolves took out all the lumberjacks with dives. Jarrett looked to hit Galloway with a guitar but Eric Young stopped him. It was a SWERVE! though as Young betrayed TNA and struck Galloway with the guitar. Mordetzky pinned Galloway to gain the man advantage. Like the opener this was more of a backdrop for everything else to happen around it, rather than the match trying to be something worthwhile of its own. **

Final Thoughts: It’s remarkable how much they’ve rushed through the TNA/GFW angle. In the last two weeks alone they’ve run through around six weeks’ worth of angles. And as usual PPV means absolutely nothing to them as Bound For Glory is on the horizon but it still feels like an afterthought at this stage. At the end of the day this show had one broad purpose – make the viewer care about the TNA/GFW match next week. And in that regard it largely failed. 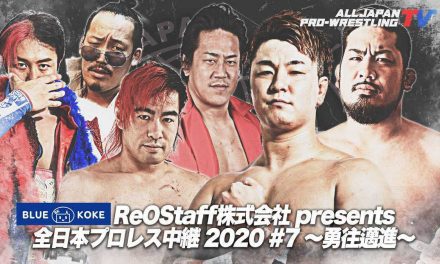