The New Day are over; there can be no doubt about it. Through sheer force of will and talent, the trio of Kofi Kingston, Big E, and Xavier Woods have managed to become the most entertaining act that the WWE has to offer.

But this was not always the case. When they debuted as a babyface unit back in November of last year, they were met with nothing but indifference. Nobody cared about The New Day and their positive preaching. The team seemed like a bust.

As the months went on, this indifference turned into annoyance as the crowd became more and more hostile towards the three men. “New Day sucks” chants from the audience began to overpower the trio’s own “New Day rocks” chants. WWE wisely decided to turn them heel.

This heel turn ended up being the best thing for The New Day. Now that they were heels, Kingston, Woods, and Big E could play up their annoyance factor to the nth degree. They could be as loud, exaggerated, and insufferable as they wanted. Xavier Woods now can’t go five seconds without running his mouth at ringside. Big E’s strength and agility is matched only by his goofy dancing and preacher-like annunciations. And the greatness that is the new and improved Kofi Kingston can be summed up in one gif:

All it took was one heel turn and a slight tweaking of their gimmick for The New Day to go from zero to 100 in no time at all. The VOW Twitter account asked if there were any comparisons to this type of turnaround:

Is there any comp for the New Day turning a gimmick that was absolutely dead and making it the most compelling thing on TV every week?

And after giving it a bit of thought, the person who suddenly came to mind was Owen Hart.

For years, Owen Hart had nothing to offer in the personality or storyline departments. Don’t get me wrong, he was a great wrestler. But he had nothing else. Owen was simply, for all intents and purposes, Bret Hart’s kid brother. While Bret was winning the WWF Intercontinental Championship at WrestleMania VIII, beating Ric Flair for the WWF Championship, and wrestling in main events against the likes of Shawn Michaels and British Bulldog, Owen was toiling away in nothing matches against guys like Skinner and the Beverly Brothers. His two tag teams, The New Foundation with Jim Neidhart (where Owen was basically the Blaze Bayley to Bret’s Bruce Dickinson

) and High Energy with Koko B. Ware, both went nowhere.

That said, a change would soon come for Owen Hart and it would happen at Survivor Series 1993. The match was a Traditional Survivor Series Elimination Tag Match between the Hart Family (Bret, Owen, Bruce, and Keith) vs. Shawn Michaels and His Knights (don’t ask). The match at first seemed like it was going to be a clean sweep for the Harts as all three Knights were eliminated first. But then, Owen accidentally ran into Bret while he was standing on the apron. Michaels rolled up Owen and eliminated him. Owen would be the only member of his family eliminated as Michaels walked back to the locker room, giving the Harts a countout victory.

After the match, a different side of Owen Hart emerged. He yelled at Bret for causing him to get eliminated. Bruce and Keith tried to get him to calm down, but Owen was incensed. The crowd began to boo Owen. Helen Hart, the matriarch of the family, was visibly upset. For the first time in his WWF career, Owen Hart had a purpose.

While Owen still had a ways to go, the seeds were sown. Owen started wearing pink and black attire, Bret’s trademark sunglasses, and began using the Sharpshooter as his finishing move. Owen challenged Bret to a match, but Bret refused. Ultimately, it seemed like Owen had calmed down and his relationship with Bret had mended because the two were scheduled to challenge The Quebecers at Royal Rumble 1994 for the WWF Tag Team Championships. Partway through the match, however, Bret injured his leg. He couldn’t make the tag to Owen. The referee finally stopped the match due to Bret’s injury, giving The Quebecers the win.

Owen finally snapped. He attacked Bret after the match (which Owen infamously described as kicking Bret’s leg out of his leg), cementing his heel turn. Owen’s reasoning was that he was sick and tired of living in Bret’s shadow. He knew he was a better wrestler than Bret, but he never got the recognition he deserved. The only thing people knew him as was Bret Hart’s kid brother.

Owen Hart went from nothing to something in the exact same manner as The New Day. He took his gimmick of being Bret Hart’s younger brother and tweaked it. Whereas before Owen’s sibling relationship with Bret was merely a descriptor, now it was the entire basis for his actions. It encompassed his character’s motivations completely. He was now obsessed with proving to everyone that he was better than Bret. It was really enticing stuff and a great chance for Owen to showcase his promo skills, but the best was yet to come.

Owen eventually got his wish. He wrestled Bret in the opening match of WrestleMania X. In an absolute classic match, Owen pinned his brother clean for the victory. He had done it; Owen had beaten Bret. And after beating him, Owen’s entertainment value skyrocketed. How? He became the most obnoxious man on the planet.

Loud. Boastful. Vindictive. This was the new Owen Hart. Everywhere he went, Owen bragged about how he was better than Bret, how he had proved to everyone that he was better than Bret at WrestleMania. The guy just wouldn’t shut up. His ego grew even more when he won the 1994 King of the Ring Tournament and dubbed himself “The King of Harts,” another jab at his brother. The man even had the nickname printed on his tights so no one would forget. Seems like typical heel stuff, I know, but I feel there’s a bit more complexity than meets the eye. The new Owen was louder and a lot cockier, sure, but I also think there was a strong current of self-consciousness. Owen constantly boasting about beating Bret, after years of living in his shadow, was his attempt to tamp down his own self-doubts; to not only remind the audience of his wrestling superiority, but to reassure himself of his abilities as well.

Another interesting thing to note about Owen’s new personality was that it not only generated a great deal of heat from the audience, but it was helped illuminate the characteristic divide between the two brothers. Bret was stoic; Owen was emotional.

After winning the King of the Ring tournament, Owen had one thing left to do: beat Bret again. This time he would get the opportunity at SummerSlam 1994 in a Steel Cage match for the WWF Championship. Owen had done it before; he could surely do it again. Alas, Owen would this time end up on the losing side. The match came to a close when Bret and Owen had both climbed over the top of the cage and were battling to see who could drop down first. Bret smashed Owen’s head into the cage and Owen’s leg became stuck between the bars. Owen could only dangle upside-down and watch helplessly as Bret reached the floor and retained his title. It was quite a fitting ending, as Bret won merely on the sheer luck of Owen’s leg slipping and getting caught in the cage. Owen had pinned Bret at WrestleMania. But Bret hadn’t pinned him here. In Owen’s mind, he knew he was still better than Bret because he beat Bret clean and decisively. Bret merely won in a fluke. It was more fuel for the fire for the frustrated, self-conscious, egomaniacal, and entertaining Owen Hart. The feud would continue on for many months, but this eight-month period was definitely the peak of the Bret-Owen rivalry.

Owen Hart and The New Day are two amazing examples of how wrestlers can have a gimmick that initially gives them nothing in return. But by creating a simple twist on that same gimmick, it can change their careers and make them utterly entertaining. Rest in Peace, Owen Hart. This New Day gif is for you: 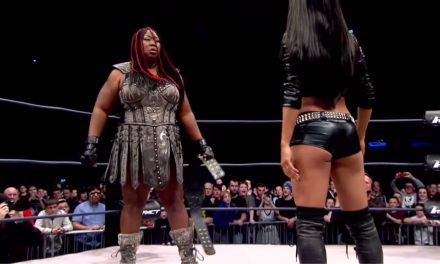 Trials of Strength: The Saga of Gail Kim vs. Awesome Kong 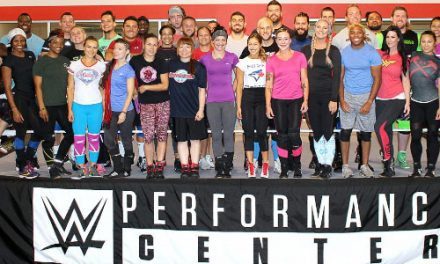