Who says reality television is mindless, soulless junk with no redeeming qualities? This week’s episode of “Total Divas” is a veritable Raisin Bran of valuable lessons, packed with scoop after scoop of lifelong learnables.

First off, we’ve got Naomi/Trinity Fatu, who grew up in a broken home and consequently wants to make precious memories for her family. She attempts to do this by piling a large selection of various Fatus, including her husband Jon (Jimmy Uso) and his cousin Tamina Snuka, into a rented motor home for some forced recreation. (Tamina is mostly there to shout things like “Keep your eyes on the road!” and “Are we there yet?”)

Of course, everything that can go wrong does go wrong — the A/C breaks, the shower backs up, and a planned inner tubing outing is canceled due to weather. Fed up with Jon’s complaining, Trinity blows her top and has to be talked down. The trip is salvaged by the universal peacemaker: s’mores. (The other reason Tamina is there is to teach all the kids the right way to toast a marshmallow.)

Then there is Nikki Bella, who is learning that being Divas Champion for a near-record length of time means living with a punishing, brutal, unrelenting schedule for months on end. At one point, she arrives at a TV filming with sister Brie and says she doesn’t even want to get out of the car.

“You have to put a smile on your face and leave all this in the car, ’cause that is our job,” Brie tells her. “We walk in together, we have our big ol’ smiles — just know you have me to lean on.”

The twins go to see WWE’s own Spectre of Corporate Forboding, Mark Carrano (who to them apparently is some kind of weird father figure? I am more baffled by him than ever after this episode, especially since he does the whole meeting with the Kane mask in the glass case on a table behind him), and after some tough love, he agrees to give Nikki a couple of days off (on any day but a Monday). The Bellas and their sister from another mister Renee Young decamp to Napa, where the wine flows and Brie gets less and less shy about proclaiming that she thinks Nikki should seek professional help for her state of exhaustion.

“I feel like you would benefit from therapy,” Brie says.

“And I feel like you would benefit with a muzzle around your face,” Nikki replies.

“See how you just got angry right there?” Brie asks. “A therapist would tell you, like, you should’ve said something else or went a different way.”

A fair point, but I have to stick up for Nikki here; I’ve been to therapy, and it is the worst. Worse than camping, even.

Sober Brie limited her therapy comments to quiet exchanges with Mama Bella; Napa Brie (who is not in full Brie Mode, but is en route) talks about it to anyone who will listen, including a bartender who looks like he’ll need therapy of his own afterward.

“Do you serve buzzkill? Because she wants to drink it,” Nikki says to the bartender.

Back home (or on the road; who can tell with this crowd?) Nikki seeks counsel from John Cena, which is either the best or worst idea possible; likely no one knows more about life on the road as the champ, but on the other hand, he’s done it so much longer that who even knows if he’s capable of being sympathetic about it?

Except that John Cena is, of course, Total Divas’ resident font of suave, sophisticated sensitivity (if Daniel Bryan is the show’s Yoda, that might make Cena Obi-Wan Kenobi… or maybe Emperor Palpatine?), and he quickly talks reason to Nikki when she says vacation is her therapy.

“But you don’t get a lot of vacation time,” he points out. “You felt good when you had time to just think about nothing — why not schedule a time every week when you can do that?”

Turns out Nikki was scarred by a bad family experience when the Bella parentals got divorced — the rest of the family laughed at her when she started to cry during their one and only session. After The Champ points out that her family won’t be in therapy with her this time (and compares it to “mentally working out”), Nikki agrees to give it a try.

Back at work, Nikki gushes to Brie about how great therapy is and how much she’s gotten out of it already.

“We ended up going two hours,” Nikki says. “She goes so deep into your past, and what you realize is what happened to you as a child is what you carry on, you know, in life. She’s like, ‘So that’s why you’re defensive in this, and that’s why you’re this and that.’ It’s a trip.”

Which makes me wonder if maybe her therapist isn’t some kind of… I mean, I hate to just toss around the word “quack.” But that’s an awful lot of breakthroughs for just one session.

Back in Los Angeles, Eva Marie is still focused on getting her career back on track. She reminds us for the one thousandth time that her new manager also manages The Rock, and incredibly she is talking not about the music-themed pizza chain but wrestler-turned-actor Dwayne “The Rock” Johnson. Feeling neglected in all this is husband Jonathan, who is tired of having a relationship with the back of Eva Marie’s hands as she replies to emails on her phone.

“My brain doesn’t shut off,” Eva whines when Jonathan busts her working in the car.

“Well, your brain may not shut off, but you have direct control over your phone,” he points, out, reasonably, in a manner that resonates deeply with any person whose spouse is permanently attached to his or her mobile device ARE YOU LISTENING, SETH PARTNOW?

The couple plans a work-free day that is of course interrupted by a phone call from Carrano, ringing up on a Saturday to let Eva she’ll be back on the road two weeks earlier than planned. Eva immediately starts fixating on ring gear and music and training, which (long story short) leads to a string of events that culminates in her cell phone being dropped out the window of a moving vehicle.

, to which Eva has been personally invited by The Rock (to be clear, he is never Dwayne Johnson to Eva. He is only The Rock). Actually, to be clear, she never says he’s invited her personally; she says The Rock wants her to go. Which sounds almost vague enough to be technically true. 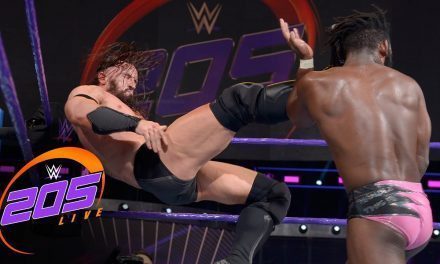