The podcast week in review, brought to you by Adorama (or our Amazon and WWE affiliate links).

Talk n’ Shop #58 (8/15/15): Lots of talk about, um, self pleasure this week, as Karl has a run-in with the window washer while in the middle of the act. AJ’s disgusted reaction to his stablemates’ loudness cracked me up pretty good. Plus, no one threatens to choke anyone from the website. That checks all my boxes. THUMBS UP

MLW Radio #195 (8/30/15): Konnan, Disco Inferno, and Court are the crew for this week. They talk about hanging out with Dennis Rodman, Curt Hennig’s pranks, and Disco Inferno trolling ROH fans, which isn’t any more interesting than the first time he talked about it. Nothing yet about Triplemania from Konnan, in case you’re keeping score. And Disco and Konnan then leave abruptly, so MSL joins the show as Court talks about the first Nitro and SummerSlam 1993. A ramshackle show; the undisputed highlight is Disco singing Sabu’s old theme song. THUMBS DOWN

Taz Reaction Show #35 (8/31/15): Taz kicks off the show explaining how he’s a 3 time world champion (apparently the FTW title counts). They also talk about the new Taz Show starting September 14th, and then Taz reacts to Deam Ambrose almost getting stabbed, as well as Taz’s run-ins with fans over the years. They touch on Kanye West to close things out. A pretty rambling show, Taz’s cold streak continues. THUMBS DOWN

Steve Austin Show #251 (9/1/15): Steve and Wade Keller…break down SummerSlam? No clue why they didn’t do this last week, as those shows were interviews with Kelly Kelly and Chael Sonnen, which surely could have been delayed. Anyway, I’m of two minds here. The discussion is actually really good, with Steve and Wade being a lot more critical of things than you may expect. But at this point, you’ve probably heard endless breakdowns of SummerSlam, so do you really need another? And they don’t even cover the whole show; with part two coming on the Unleashes show. THUMBS IN THE MIDDLE

The Ross Report #81 (9/1/15): UFC Fighter, pro wrestler, and commentator Josh Barnett joins JR this week. They cover a plethora of topics, including calling wrestling matches that aren’t new, his upcoming fight against Roy Nelson, the glory days of Pride, current New Japan stars, Billy Robinson and Danny Hodge, training men vs. training women, Bellator, pro wrestling submissions in fighting, and more. Barnett is always a solid guest, and if I’ve enjoyed his appearances on Steve Austin’s podcast more, this was a fine outing. Also, Ross has added a Larry Zybyszko impersonation to his repertoire. Game changer! <Barnett’s interview starts at 19:53> THUMBS UP

WOOOOO ™Nation #18 (9/2/15) Ric and Conrad chat talk with…sigh…Vince Russo. It’s the usual Russo interview, where he takes credit for the WWE’s boom and no blame for what happened to WCW or TNA, throws out dubious figures, and states the usual “fans don’t want wrestling on wrestling shows” deal. Even if you mainly listen to these shows for Flair, he’s quiet for lengthy segments as Russo just goes on and on. The first Flair show I really didn’t like. THUMBS DOWN

Talk is Jericho #174 (9/2/15): Jericho sits down with Titus O’Neil and Darren Young, the Prime Time Players. Lots of talk about how they got together as a team, being on NXT twice, where “Millions of Dollars” came from, lots about Darren coming out as gay, Titus’ story and why he has an affinity for the homeless, Khali duty, Pancake Patterson, Titus being dad of the year, and a lot more. Young and O’Neil come across as great guys and this show makes you happy for their recent success. THUMBS UP & BEST OF THE WEEK

Human Podcast Machine #36 (9/2/15): It’s Fantasy Draft time again, as this time Taz, Mike Tenay, and Producer Seth run down their current 10 wrestlers. This is a topic they visited way back in episode #4 in January, but it’s one ripe for a redo, and it’s interesting to see who has dropped off the list. As usual, there’s some good discussion and everyone gives everyone else a hard time. While it’s one of the lesser Fantasy Draft shows, it’s still Taz’s best show in a while. THUMBS UP

Bauer & Pollock (9/2/15): The show this week reads like the police blotter, as they run down the Jimmy Snuka murder charges, the shooting outside the Performance Center, the Hulk Hogan apology on Good Morning America, TNA and Lucha Underground’s possible future, talent movement in the WWE, Sting in the main event, NXT on the road, Palmer Cannon (?), and Narcos (which has nothing to do with wrestling, but does involve drugs). A nice recap of a busy, if not outright depressing week. THUMBS UP

Art of Wrestling #266 (9/3/15): Another live show from Edinburgh, this time with Mickie James (her angle with Trish), Billy Kirkwood (various topics), someone named The Wee Man (wrestling raps), and Grado (Grado things). I’m a broken record by now, but this was the usual decent but not great outing. Really hoping this is the last one and we can get back to normal next week. THUMBS IN THE MIDDLE

Steve Austin – Unleashed #252 (9/3/15): Part two with Wade Keller breaking down SummerSlam, covering from the Rollins/Cena match onward. Again, the discussion is good, but do you still want to hear about SummerSlam in September? And they still have to talk about the NXT Brooklyn show! And if you’re wondering, there’s no profanity on a show despite it being Unleashed, so you won’t hear Keller drop an F-bomb. THUMBS IN THE MIDDLE

The Jim Cornette Experience #93 (9/3/15): Jim & Alice run down sales of Jim’s Midnight Express book, the shooting at the Performance Center, that County Clerk who won’t issue gay marriage licenses (and her dognapping daughter), Top Guy Bumps, Mike Huckabee, and more. Then Kenny Bolin and his lawyer join the proceedings to discuss Jim’s introduction to Bolin’s new book, and shenanigans involving Bolin’s son Catbox. You don’t really need me to grade this one for you, do you? <Bollin’s interview starts at 29:42> THUMBS DOWN

Talk is Jericho #175 (9/4/15): Iron Maiden frontman Bruce Dickinson joins Y2J to hype the band’s new double album “The Book of Souls.” Lots of talk of releasing an album in today’s musical climate, WWII planes, his bout with cancer, cutting off his famous long hair, good times in Uruguay, winning a piano in a raffle, and a lot more. It’s a decent show with some good stories, but it’s never as interesting as you might expect an interview with Bruce to be. <Dickinson’s interview starts at 21:38> THUMBS IN THE MIDDLE 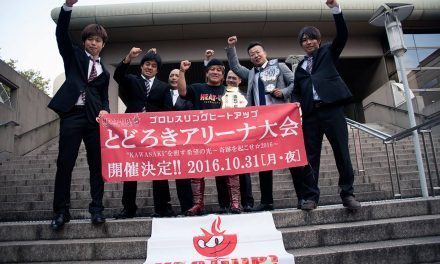