“A table is a terrible thing to waste”

There’s not much more I think WWE could do to set off SmackDown on the right foot than to open with the New Day. I involuntarily started beaming as soon as their music hit. This Tables Rights Activist plotline is probably one of the sillier stories WWE has run with lately, but I love that it also emphasises the inherent ridiculousness in the Dudleys’ decades long gimmick. Basing your personality– across multiple promotions– on your desire to destroy furniture is not a badass awesome cool guy trait. It’s weird as heck, and The New Day challenging this with protest signs is the sort of absurdly perfect bathos that wrestling sometimes stumbles across quite magnificently. Self-referential lampshading of nonsensical wrestling tropes is my jam.

It’s doubly good though, because The New Day aren’t mean-spiritedly dismantling beloved wrestling cliches. They’re not standing on a podium saying “Bubba, this tables thing is weird, what the dickens is up with that”. Instead, they emerge claiming that “tables are the backbone of human achievement,” which is such a lovable phrase that I’ve never been more infuriated with piped in negative audience reactions. Big E comes into his own whenever a promo requires him to be evangelical about anything, no matter how trivial, and he’s particularly convincing here.

Of course, the Dudley Boyz take umbrage at this furniture love-in, and emerge to embarrass themselves by being 10% as good on mic as Xavier Woods on a bad day, with Bubba Ray twice-embarrassed by being dressed in clashing-camo, collared, sleeveless, overalls. I know that’s what he wears, but are we all just okay with it? Is no one going to say anything?

The Prime Time Players’ whistles hit shortly afterward, and Titus has some quips about earning your keep. This is another thing I think is really great about this whole story. While PTP initially seem superfluous to the drama in the tag division, they’re necessary to be a genuine babyface team, saying sensible things and having honour and pride and believing in respect. The Dudleys being default unchallenged faces because of nostalgia alone would be pretty awful. Whether O Neil and Young are big enough personalities to have people root for them over the Dudleys remains to be seen. I feel like it would have been wise to postpone this matchup for that reason, but they very rarely consult me about these things…

The Dudley Boyz vs The Prime Time Players

We get The New Day on commentary, which is an unmitigated joy, and I found myself somewhat maliciously wishing that Xavier Woods had the arm injury and got to be guest colour-commentary for nine weeks instead of Jimmy Uso. Woods starts off catty straight away:

“This is better than when you have them on commentary, because you’ve got Titus just screaming for no reason, and Darren is totally silent! We’ll give you quality commentary, and we’ll keep this table safe!” Woods then hands over to Big E, who does his best play-by-play voice, and it’s hilarious. I’m at real risk of transcribing the entire thing, so just go and watch this match right now, just for that. It’ll make you smile, or you’re clinically dead.

Did I mention we now have Rich Brennan joining us permanently? I haven’t made up my mind about him yet, apart from that he’s a far superior commentator than he is a backstage interviewer, where he leant towards being awkward and perspiring. He’s also willing to learn which endears me to a person massively. Being stuck between Jimmy Uso, who has the enthusiasm and coherence of a puppy; and Lawler, with his painful, rambling old-fashioned ex-wife jokes and random Dragon Ball Z references– well, that’s no mean feat.

Oh, right, the match itself! It’s nothing exciting, apart from the part where Bubba Ray is red-faced, gripping on to the back of Darren’s tights for dear life, futilely trying to prevent the inexorable Titus hot tag. The Dudleys aren’t flexible or bouncy enough to make Titus look like a real monster though, so the sequence is a little flat. Then, with no real connection to the rest of the match, the Dudleys hit 3D for the pin on O Neil. The New Day make a rapid escape with their bubblewrapped table in tow.

You know how, when you’re fantasy booking on Total Extreme Wrestling, and you lose energy for original awesome ideas, so you just go with something that worked moderately well a couple weeks ago and copy and paste it? I mean, the crowd will give it a solid C regardless, and it’ll probably go down better than that experimental intergender fourway cagematch that you tried on Main Event. So that’s what this feels like. It’s just the same pairing from umpteen prior SmackDowns, that even sort of had a blowoff at SummerSlam, and it’s here again.

As if the sneaky SmackDown gods, playing a great big macro TEW in WWE HQ, heard my grumbles, this match gets interrupted before it even starts by…sigh, The Ascension. They lay a beatdown on Neville, and drag him to the ring for Stardust’s approval.

It transpires that the Ascension are Stardust’s new comic book villain lackeys, which is a more believable partnership than the Cosmic Kings, and the Ascension being a “muscle” role to Stardust’s drawling, rambling bad guy rhetoric sort of fits. “Welcome to the Cosmic Wasteland,” Stardust declares.

I irrationally hate everything that Sheamus does, and perfectly reasonably adore everything within a three foot aura around Cesaro, so this match made me feel conflicted, before I decided to just give up and enjoy it. Cesaro is so great at wrestling that he kicks Sheamus in the face almost incidentally while merely entering the ring. This is a fun, hossy match like you’d expect, but wasn’t as good as I think it ought to be. The theme is that Cesaro has injured ribs, and Sheamus keeps trying to capitalise on that whenever possible: this means a lot of Cesaro clutching himself and scrunching up his face, rather than being an impossibly strong superhuman and throwing people around. After a few minutes of struggle, Sheamus gets the win with the Brogue Kick, and then dribbles into his beard braids for a bit, so avert your gaze if you’re squeamish

CW for discussion of domestic violence.

More than once on this episode I felt sad that the whole show wasn’t just devoted to the Tables Rights Activist story, because that is a thousand times more compelling and human and real than whatever abomination is occurring in the Summer/Rusev/Lana/Dolph love polygon. This is an episode of Miz TV based around squealing and running away happening in the background of other scenes on RAW, I guess? That seems like a really tenuous basis for a segment, but ok. Did you know Summer Rae has a tron video with the Bulgarian flag in the background now, and all the clips have been replaced with her worriedly holding Rusev’s hand aloft? The men in this plotline have drained the women empty and replaced their spirit with themselves.

This is horrible and uncomfortable, and I think the people who are defending this story as being schmaltzy harmless soap opera stuff need to watch this segment pretty hard. Summer Rae has a black eye, and is sobbing (albeit unconvincingly), over her guilt at “being seduced” by Dolph and succumbing to his advances when she had “the perfect man” in Rusev. She grimaces when she says “seduced”, by the way. So, we’ve got sexual predator vibes from Ziggler and this horrible underlying thought of “what will Rusev, a man with a creative brain for violence, and a belief that women should stay in their place, do to Summer Rae when he finds out?”. It’s like watching a domestic abuse confession, but the Miz is there whooping and yelling and trying to get the crowd involved. Is this helpful? How do you think the 22% of American women who have been abused by a romantic partner feel when they watch this? The 2.3million women in the USA who have been raped or physically assaulted by a boyfriend or husband every year?

Then this section gets all girl-hatey and Summer’s all “guess what honey” to Lana and they dredge up footage from RAW in June of 2014, and it’s like, literally no other plotline has these sort of callbacks, why are they doing it for THIS? It descends into a(nother) catfight, and Summer Rae screeches “you bitch” a lot, and it’s, well, the opposite of feel-good.

Come on, couldn’t they have squeezed this match on with the other infinite collection of Bo Dallas matches on the last few Superstars  episodes, and made Joe Lanza’s day more boring instead of mine? This match is preceded by a replay of Dallas getting suplexed by Brock Lesnar on RAW two weeks ago, which is a seven second clip and it blows this match out of the water.

Much like the Superstars match of the same name, this is a long chinlock and me trying not to get hypnotised by Dallas’ gently jiggling stomach as he breathes in and out. Bo wins.

After a succession of uninspiring and impossibly brief women’s matches on RAW, I’m feeling less revolutionary than ever. This is the most mismatched combination you could make out of the current cohort of female wrestlers, and it shows. Commentary talk about how both women have got famous fathers, and the pressure that creates. Awkward.

The match starts with an extended lock-up and both women seem to be frozen in stasis, knuckles interlocking, arms wide, like two awkward albatrosses that got their wingspans entangled. Nothing else noteworthy happens. Charlotte wins with Natural Selection.

Dean Ambrose and Roman Reigns vs The New Day

Big E and Reigns exchanging fists here is very enjoyable, and the two big men having an extended chance to slug it out turns out to be a great combination. As the match goes on, and Dean and Roman end up in the ring at the same time, it’s clear that the Shield instincts that let them lay out every opponent for months are still near to the surface, and they employ impressive teamwork to dismantle the New Day. Motivated Ambrose is so much more fun than last week’s ragdoll, gloomy Ambrose. Reigns toys with Kofi gleefully for the last segment of this match, then Xavier gets involved for a DQ.

I sort of feel like if Dean and Roman want to beat the tag champs, they should come slum it down in the tag division for a while. It would be fun, they could steamroll through everyone, once the Dudleys thing has blown over, and the midcard needs some star power. As it is, this would have been a meaningless victory for the Shield boys, so the DQ might have been the right call.

It’s also hard to complain too much about any match accompanied by Xavier Woods on trombone.

Final Thoughts: These new Mattel Create-a-Superstar kits look very good for creating a wrestler with the body of John Cena and the head of El Ligero, but not much else. 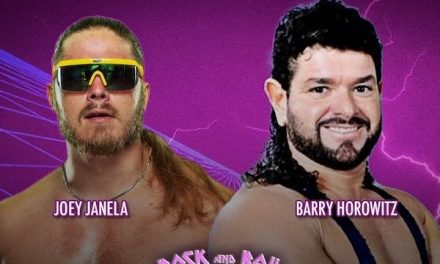