The opening video began with the line “When Bully Ray was attacked by a mysterious attacker” which is funny because he looked perfectly fine on Raw. The Hardys opened the show talking about Matt Hardy’s quest for another World title shot. Hardy said he will become the TNA World heavyweight Champion which drew out EC3. EC3 said he already conquered Matt so Matt wasn’t going to get another shot. EC3 reconsidered and said he’d give Matt another shot only if he gets Jeff as his personal assistant if Matt loses. EC3 let The Hardys stew on that. It feels like they’ve missed the boat on a really good story you can tell with Matt challenging for the World title. Matt is the father of a newborn child and has been known as a career tag team guy, a solid hand. Well now he wants to prove more he’s more than that, he wants to step out of his brother’s shadow and prove he belongs on a World title level. Because sadly the way they’ve done this everything is still all about Jeff – Matt just happens to be wrestling the match. They’ve given the audience no real reason to invest in Matt unless they have a natural proclivity to like him already. Later in the show Matt and Jeff agree to EC3’s stipulation and the match will be next week.

Eric Young vs. Chris Melendez – Melendez’ Leg is on the Line

Young dominated early before Melendez made a comeback and got a nearfall off a roll up. Melendez escaped a piledriver attempt but Young rolled him up and put his feet on the ropes to score the win. I have no idea why Young cheated here. He destroyed Melendez in their last two matches and didn’t look in much danger here but yet still cheated. You’d say one thing if Melendez had Young on the ropes but he didn’t. As a result of the win Eric Young won Chris Melendez’ prosthetic leg. Eric Young cackled and left with Melendez’ leg. This whole feud, both in conception and execution, has been a total mess. *

Last time Zema Ion picked up a singles win on Impact or PPV was November 2012. Sonjay Dutt, fresh off a comprehensive loss to champion Uno a couple of weeks ago, last won a singles match in July 2013 (which is actually more impressive considering he hasn’t worked full time for TNA since 2009 and Ion has been in TNA for three years now without winning a singles match on TV (he has won some One Night Only and Xplosion matches but TNA never acknowledges their existence)). And yet here we are with both men receiving an X-Division title match. This is why nobody cares about the X-Division anymore and this is why nobody cares about title matches (of which there were three on this show) in this company. Most of the match was two men in, one man out fast paced action with Dutt working heel. Some fun spots but like pretty much every X-Division match for the last nine years or so it was too short to really develop into anything other than a fun sprint. Uno pinned Ion after a springboard Frog Splash. **1/2

TNA World Tag Team Championships – The Revolution (Manik and Abyss) vs. The Wolves©

Once again I have absolutely no clue whatsoever what Manik and Abyss did to earn a title shot. It feels like the word “why” never enters the equation when they book these shows. The Wolves dominated early until Manik cut Davey off and The Revolution took control. Davey made the tag to Eddie who ran wild including a suicide dive on Abyss. Abyss tried a double chokeslam but The Wolves escaped, hit a double enzuigiri and hit Abyss with a double Van Terminator. Storm tried to interfere but Mahabali Shera made the save. The Wolves hit the Alarm Clock followed by the Force of Nature to retain the titles. The Wolves are one of the only acts on this show who break it out of the doldrums. They actually bring some energy to what generally feels like a lethargic show. This is where Abyss is best used these days too, where he can pick his spots. ***

I honestly kind of forgot Brooke was Knockouts champion. Even as champion she seems to be at most the third most important thing in the division. As it turned out she was the least important thing in this title match. They were having a solid enough match before Jade and Marti Bell ran out and attacked Velvet (who assisted Gail Kim last week in getting revenge on Taryn). Rebel, who hasn’t been seen in ages, ran out to make the save but it was a SWERVE! Rebel attacked Velvet and was then revealed as the newest member of The Dollhouse. The title match was merely a backdrop for the angle. *1/2

Mr Anderson vs. Bobby Lashley vs. Bobby Roode vs. James Storm – King of the Mountain Title Number One Contenders Match

They started with a brawl around ringside. Lashley suplexed Roode on the ramp. Lashley and Anderson teased teaming up with each other before they had a fun exchange of counters. Roode and Storm faced off and started exchanging punches. Matthews and Pope began talking about how they were surprised former partners Roode and Storm weren’t teaming up with each other, clearly unaware of how that team ended. Roode took out both Lashley and Storm with a Tower of Doom before Anderson pushed Roode off the top and missed the Kenton Bomb. Roode had Lashley in the Roode Bomb but Storm hit him with a Codebreaker. Anderson hit Roode with a Mic Check but Storm made the save. Anderson hit Storm with a Green Bay Plunge but turned into a Spear. Lashley looked for a Spear on Roode but Storm cut him off with a Last Call. Storm and Roode went face to face and hit the old Beer Money suplex on Anderson before immediately turning on each other (they do that spot in every multi-man they’ve had since they broke up). Roode dodged a Last Call and hit the Roode Bomb on Storm to pick up the win. This was a lot of fun. It was really nicely paced, with the action constantly ticking over and I’m looking forward to Roode vs. Black next week. ***1/4

Dixie Carter made her way to the ring to give her decision on whether or not she’ll let Jarrett run Impact. She has new entrance music. Jeff Jarrett joined her in the ring. Just as Dixie was about to appoint Jarrett as the new authority figure Drew Galloway interrupted. Drew said he put his criminology degree (which is legit) to use for the first time in his life and revealed that he believed Jarrett was responsible for the attacks on himself and Bully Ray. Jarrett swore he had nothing to do with it. Karen came out and revealed she was responsible for the attacks. She said she did it for Jeff even though he didn’t ask her to because he deserved it. Jarrett attacked Galloway and decided to go along with Karen. The Global Force roster attacked as Spud, Andrews, Robbie E, and The Wolves all tried to make the save one by one and failed. I guess the rest of the TNA roster don’t care all that much. You know, considering how often people have tried to take over TNA it must be pretty great. I really hope this angle at least gives Impact some juice for a little while.

Final Thoughts: This was a pretty easy show to watch for the most part. Nothing too good aside from the very fun four way but the time passed pretty quickly. I’m hopeful for the TNA vs. GFW feud. I really hope they do a good job capturing why everybody is fighting for the side they choose and what TNA or GFW actually means to them. They have to capture why the people involved are willing to go to war over their respective companies. 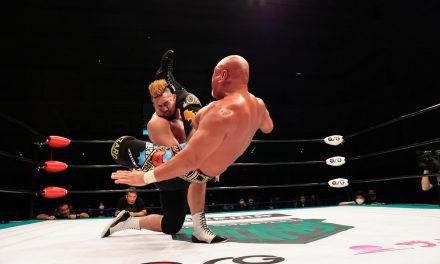