No Podmass next week, as I’m on vacation and spending time with my family, rather than listening to Jim Ross tell wrestlers to slow down for the millionth time. You’re on your own. Vaya con dios.

The podcast week in review, brought to you by Poker Stars (or our Amazon and WWE Shop affiliate links).

Talk is Jericho #169 (8/14/15): Jericho talks to Matt Tuck & Moose from Bullet For My Valentine, which I guess is a band. They talk about their new album and their pursuit of a heavier sound (so basically the same interview every band gives with a new release). They also discuss the trials and tribulations of being an opening band and the state of the music industry. I know nothing of BFMV, but this didn’t engage me at all. [Tuck & Moose’s interview starts at 19:02] THUMBS DOWN

Talk n’ Shop #58 (8/15/15): Karl and Doc catch a ride with “Hacksaw” Jim Duggan after a GWF show and chew the fat. Hacksaw talks about getting into wrestling, various territories, dressing as a gorilla in Mid-South, being busted for pot with the Iron Sheik, and a lot more. Hacksaw is on point and as usual comes off a lot wittier than you might expect, and Doc and Karl are in awe of the old territory days. A supersized episode at 1 hour, which is funny because it’s still considerably shorter than your usual wrestler podcast.  THUMBS UP & BEST OF THE WEEK

MLW Radio #191 (8/16/15): MSL is back, so he, Court and Konnan dust off the old mailbag. Note: due to scheduling, this episode was a recorded a few weeks back, so there’s no mention of Triplemania or any current events. That said, the show is entertaining despite its “evergreen” nature, including a lengthy discussion on whether size still matters in wrestling. MSL may want another hiatus after this show, as he takes a beating for numerous responses, especially when he reveals he doesn’t really watch wrestling anymore. THUMBS UP

Steve Austin Show #247 (8/18/15): Sean Waltman is the guest this week. No real reason for the interview, they just talk about a bunch of random topics, including Waltman’s early training, the whole early run with Razor Ramon, getting hurt wrestling Bill Wilcox (who he took the Kamikazi Kid name from), and shooting meth before wrestling AJ Styles (yes). It’s a solid interview that covers a lot of topics you may not have heard before. THUMBS UP

Human Podcast Machine Reaction show #27 (8/18/15): Taz reacts to Raw. Well, that’s the idea, but he spends the first half hour talking about his pool, College Gameday, and other nonsense. When he and Seth finally start discussing the show, Taz reveals he missed part of it, so Seth handles a chunk of the review. None of the discussion is all that great, and Taz even dumps on Botchamania! Now that’s a bridge too far! THUMBS DOWN

The Ross Report #79 (8/17/15): Tony Schiavone returns after a year to catch up with JR. They talk about WCW closing, memories of Dusty Rhodes, calling shows together, the NWA/UWF merger, if Tony would return to wrestling, college football, partying with Ric Flair, Ole Anderson, Jim Cornette, and more. Ross explaining Lucha Underground to Tony is something else. There’s an odd sourness to the episode when it comes to current wrestling and fans, and Tony just seems disinterested overall. It’s not nearly as good as his first outing. [Schiavone’s interview starts at 18:26] THUMBS DOWN

WOOOOO ™Nation #16 (8/19/15) Bruce Pritchard joins Conrad and Ric (not in studio for some reason) to tell some stories. Lots of tales about Eric Bischoff taking on Gerald Brisco, bringing the Undertaker into the WWE, how Bruce got into WWE, the folly of working in TNA, Ric changing his vote in Gut Check (which is verified here), working with Stone Cold and Rock back in the day, booking SummerSlam, Hulk Hogan’s booking power in the WWE, Triple H’s rise to power, working the gorilla position, and more. Lots of fun stories and the insight into how the Undertaker was created is fascinating. THUMBS UP

Talk is Jericho #170 (8/19/15): Sex therapist and podcast host Emily Morse joins  Chris to talk about, well, sex. Orgasms, toys, positions, you name it. Plus more about how Morse became a sex expert, hosting Loveline, getting her podcast started, and hosting the Podcast Awards with Jericho. I’d call it a pass if you’re prudish or the kids are in the room, but beyond that, this is a fun and funny podcast. [Morse’s interview starts at 18:26] THUMBS UP

Human Podcast Machine #34 (8/19/15): Taz previews NXT Takeover and SummerSlam. That’s about it. It’s a short show at about 40 minutes and Taz doesn’t have any great insight. There will be a ton of shows previewing SummerSlam this week that will be a lot better than this. Taz needs to get a guest on or do a fantasy draft, because his shows have been fairly lackluster the last two weeks. THUMBS DOWN

Art of Wrestling #264 (8/20/15): Part 2 from Edinburgh. The lineup this time includes comedian Dylan Gott (talking a lot of old random topics), female wrestler Nikki Storm (wrestling in Japan), comedian John Robertson (again, a lot of wrestling topics), and wrestler Big Damo (testicles). Storm doesn’t add much as a guest, but the other 3 are decent enough, which adds up to your usual mixed bag live show. THUMBS IN THE MIDDLE

Steve Austin – Unleashed #248 (8/20/15): Part 2 with Vampiro. They get more into his character work, martial arts, WCW (Vamp does not have fond memories), his feud with Konnan, injuries, Bruiser Brody, Eddie Guerrero, Art Barr, getting promo tips from Che Guevara (!), commentating for Lucha Underground, the scene in Mexico, wrestling in Japan, working with the Insane Clown Posse, and much more. Again, I can’t verify everything Vamp says, but he remains a supremely compelling interview.  THUMBS UP

The Jim Cornette Experience #90 (8/20/15): The show opens with an interminable intro where Jim talks more shit on the Young Bucks and sings the Underdog theme song. Things pick up when former UFC fighter and current commentator Chael Sonnen joins the proceedings. He talks teaching Anderson Silva to draw money, fighting with Wanderlai Silva, hooking up with Global Force Wrestling, attending Roddy Piper’s funeral, and a lot more. Sonnen remains a blowhard, but at least he’s an entertaining one. [Sonnen’s interview starts at 31:40] THUMBS UP

Talk is Jericho #171 (8/21/15): In a wise bit of cross promotion, Jericho talks to the Final 4 of Tough Enough. The interviews are broken up, with Amanda and Sara Lee up first, followed by Josh and ZZ. The interviews are similar; discussing how everyone found their way onto the show, auditioning, their approach to the competition, and why they should win. The finalists were all surprisingly cordial to one another. I don’t watch Tough Enough but this interview was decent if a little bland overall, and even if you’re a diehard fan of the show I can’t imagine you getting a lot more out of it. [Amanda & Sara Lee’s interview starts at 23:57, Josh & ZZ start at 1:04:04] THUMBS IN THE MIDDLE 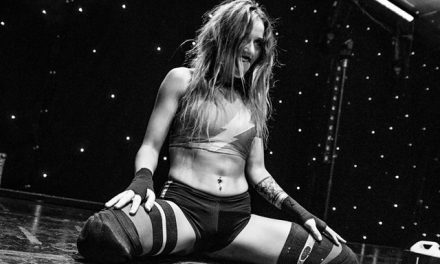