EVOLVE looked to wrap up its weekend on a high note in lovely Long Island. Biff Busick and Timothy Thatcher were given the main event slot to settle their grudge in a No Holds Barred Match. The undercard looked just as promising as the main event. Zach Sabre Jr. looked to end his summer run in EVOLVE with a win over Chris Hero. A newly turned Rich Swann was scheduled to take on his former best friend Johnny Gargano.

Page came to ring carrying the Open the Freedom Gate championship belt and doing his best impression of smarmy Johnny Gargano. As much as I loved the psychotic iteration of his character from the night before it was good to see Page back to hamming it up as only he can.

Hometown boy Tony Nese got nice a reception from the Long Island crowd. Buoyed by having the crowd in his corner, Nese ditched the uber slow heel style he has been working for months and went back to the flying/power game that got him over in the first place. I hope the change is permanent because Nese matches have been bathroom break quality lately and the guy is too talented for that to be the case.

Nese vs. Page was a competitive opener and both athletes got in their signature sports. It was nothing fancy but it was an easy watch. The closing stretch was outstanding and contained some great counters and reversals but in the end a 450 Splash earned Nese the clean pin fall win. If I were booking I would have had Johnny Gargano cost Page the match but that’s just me being overly critical. ***1/4

Post-match Page got on the stick and feigned a heartfelt speech about how he felt he let all of his fans down. That brought out Johnny Gargano who looked like he was sick of Page’s mockery and was ready to make him eat those words. Rich Swann blocked Gargano’s path to this rival. Gargano tried to talk Swann out of fighting him but his former best friend sucker punched him instead and that let into the second match of the evening.

Gargano wanted nothing to do with Swann in the early stages of the match. At one point he took him down with a weak headlock and tried to talk some sense into Swann instead of using the hold to wear him down. Then when an opportunity presented itself to superkick Swann, Gargano was not able to pull the trigger and missed a chance to take control of the fight.

All his early hesitation faded away once Ethan Page sauntered ring side. A fired up Gargano took the fight to Swann but also had to deal with Page at ring side. Despite a valiant effort the numbers game was too much for “Johnny Wrestling” to overcome.

Referee Brandon Tolle went down late in the match after an inadvertent kick from Gargano. Page hit the ring and tried to take out Gargano with a belt shot but instead ended up on the canvass. Gargano picked up the belt and debated whether to use it. Swann made up his mind for him and blasted a Superkick into his former friend’s face. One Frog Splash later and Swann scored the 1-2-3.

I didn’t mind the interference from Page because it fits into the context of the feud. The issue I had with this match was how rushed the story was. Gargano struggling to fight his former friend was good stuff but it only lasted two to three minutes. As soon as Page came the tone of the match shifted instantly and undid the narrative that was established in the beginning. The effort was there to cultivate a good in ring story but the execution was sorely lacking. **1/2

Page cut a promo over the fallen Gargano that declared him and DGUSA dead.

In the past I’ve criticized Premiere Athlete Brand matches for having a distinct and awful style. They are purposefully slow and rely on outside antics to keep heat on the match. I bring that up because Caleb Konley worked slowly during this match and I enjoyed it. The difference is that this time the deliberate pace was not selected in the name of stalling. Konley wrestled methodically and made his moves count in contrast to Baretta’s hurried offense. Like Nese earlier in the night, I hope Konley sticks with this style because it made this match enjoyable.

In theory the crowd should have been salivating for a Baretta comeback but the Long Island faithful’s enthusiasm was rather subdued all night. So, when Baretta made his comeback it felt flat and that is a shame because Baretta worked damn hard all match long.

The finish came after a nice closing stretch. Baretta was going up top to try to finish his former stable mate off. So Cal Val screeched at him and provided enough time for Konley to crotch Baretta and hit an Avalanche Samoa Driver for the win. Val’s interference made sense and was the only logical finish that would allow the feud to naturally continue.

You could not ask for a better wrestled or constructed mid card match than this one. ***1/2

Post match, So Cal Val ran down Baretta on the mic. As a nice consolation the crowd gave the hometown boy a standing ovation on his way to the locker room.

A lot of the buzz online surrounding this match was that it was “Grapple Fuck” at its worst. After watching it I don’t think this match is nearly as bad as other reviewers have said it is. The grappling made sense. Williams and Gulak used it to ground their high flying opponents and keep control of the contest.

The real issue with the match was that the teams involved did not have any chemistry. It’s hard to put together a twenty minute match without it.

The closing stretch of bout was entertaining and put a little juice back into the match but not enough to save it. Gulak & Williams picked up the win via pin after a Williams’ Piledriver on Mike Bailey.

Contrary to popular opinion this match is not an indictment of the grappling style but a causality of too much allotted time. **1/2

During his 2015 EVOLVE excursion, Zack Sabre Jr. has been booked to consistently out think and out wrestle his adversaries. Even in defeat at EVOLVE 47 he looked every bit the equal of Timothy Thatcher. At EVOLVE 48 fans got to see ZSJ fight from underneath for the first time on American soil.

It is easy to forget that Chris Hero is a skilled mat technician but I doubt anyone will neglect that fact again after watching Hero stymie every ZSJ attempt to take the fight to the ground. Hero canceled out Sabre’s mental advantage by Piledriving him early in the match and then clubbing him from behind with a handful of elbow strikes.

ZSJ found a few openings and tried to cinch in a Kimura or an Arm Bar but his luck ran out quickly on each occasion. Hero’s lanky frame helped him reach the ropes several times and once he successfully blocked Sabre’s attempt at a Cross Arm Bar.

By the match’s end Sabre Jr. could barely stand and was in a mental fog. He was easy pickings for Hero who reared back and put the British phenom down for the count with a Rolling Elbow.

If Gabe Sapolsky is trying to build Chris Hero as the main threat to Tim Thatcher this match did the job. Hero looked dominant against the one man that befuddled the very best EVOVLE had to throw at him. Sabre sold well for Hero and played the overmatched underdog to perfection in a fantastic match. ****1/2

Thatcher and Busick quietly built quite the rivalry over the course of a few months. The issue between the two began when Thatcher inadvertently broke Busick’s thumb. A couple of shows later Buick attacked Thatcher and injured his ear. Due to the injury Thatcher missed five weeks of competition. During Thatcher’s convalescence Buick insulted the Englishmen. At EVOLVE 48, the two would do battle in a relaxed rules match to end the feud once and for all.

Plain and simple this was not a wrestling match, it was a damned war between two men that loath one another. Busick made it clear he wanted to deafen Thatcher. The Bostonian repeatedly slapped at the sensitive and vulnerable ear.

Thatcher abandoned his signature arm work and focused on something much more sinister. The EVOLVE World Champion constantly clawed at the protective tape around Busick’s thumb. His persistence paid off and when the digit was exposed Thatcher broke it. Moments later he locked in a Fujiwara Arm Bar and made Busick tap out.

This was an appropriate and satisfying end to an underrated feud. ****1/4

Thatcher said in a post-match interview that Davey Richards should be next in line for a shot at his title. That comment brought out Drew Gulak who stated that Thatcher had never beaten him and that Gulak would one day take his belt. Neither man saw Chris Hero coming and after a trio of Rolling Elbows the “Knockout Artist” ended the broadcast standing tall.

Final Thoughts: Overall, EVOLVE 48 could not hold a candle to the company’s recent offerings but that does not mean that the show was a bust. The Premiere Athlete Brand finally found its in ring footing and the final two matches are worth seeking out. More importantly, the closing segment did an excellent job establishing Tim Thatcher’s next wave of title challengers. 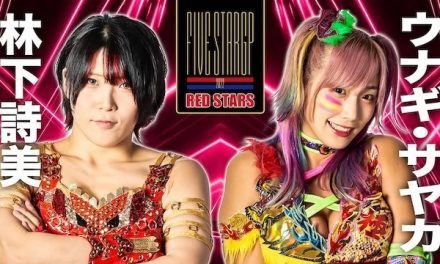 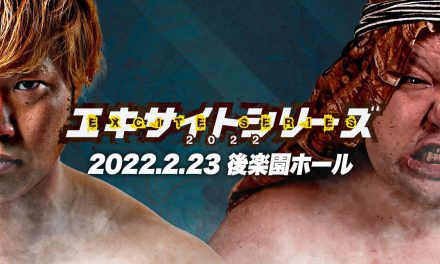