We’re onto the go-home for the biggest show in NXT history, NXT Takeover: Brooklyn. Expect a lot of T’s crossed and I’s dotted, unlike RAW where T’s are dotted and I’s are crossed.

NXT MVP & Commissioner William Regal opens the show (YAY!) with a contract signing for the NXT Women’s Championship match (BOO!). The good news is that Dana Brooke isn’t the No. 1 contender or the champion; Bayley and Sasha Banks are delights, even without that comparison, and it’s great to see the women’s division for the opening segment, even for a contract signing. Bayley signs the contract after what constitutes as trash talk for Bayley, but Banks gets the greatest of heel heats by telling the Full Sail University crowd that “there’s a reason Takeover is in Brooklyn and not here.” Golden.

Bayley does a great job calling out the history of contract signings as Banks is about to leave, but Banks goes straight for the jugular and tells Bayley isn’t on the main roster with the rest of the NXT women’s top tier because she’s a loser. This was very nearly the second NXT contract signing to end without violence this year, undoubtedly a WWE record and an assurance that William Regal is the greatest commissioner in WWE history, but Bayley couldn’t stomach the insult and attacked Banks as she walked up the ramp.

The Apollo Crews vignettes are getting tiresome, but thankfully they’re over after tonight! Crews is almost certainly the next big breakout star in NXT and is actually unlikely to be long for developmental, I think.

Jobber Dude didn’t get an entrance, or an ring announcement… or a name from the commentary team (Editor note: It was independent wrestler Rob Ryzin). Breeze comes out with a Jushin Thunder Liger mask, providing a great segue for the announce team to explain to the WWE Universe who Liger is, but definitely not the name of the guy in the ring. They could hardly finish talking about Liger, however, before Breeze hit the Super Model Kick and scored the pinfall. Breeze put the Liger mask on Jobber Dude after the match and cut a promo for the match at Takeover, including picking Jobber Dude up for a Beauty Shot and a self-counted cover.

The Hype Bros, Enzo & Cass vs. A Handful Of Jobbers I Didn’t Even Realize Were In The Ring Until The Bell Rang

This was as much of an enhancement match as an 8-man tag match can be. Yet somehow Enzo still got beat down for… a lot of the match. Enzo eventually gets a tag to Cass and Air Enzo gets the victory. I’m not sure Zach Ryder was ever the legal man. (The four opponents were Jesse Sorensen, Aaron Solow, Jesus de Leon, and an unknown new signee.)

Jason Jordan, Chad Gable and Dash & Dawson all cut a promo for their 8-man tag match at Takeover against The Hype Bros, Enzo & Cass (a match that will be broadcast on a future NXT episode). As an aside, Dash & Dawson now have awesome windbreakers that look like hand-me-downs from the Brainbusters.

Steve Cutler fared as well against Samoa Joe as Jay Cutler fares against the Green Bay Packers. Rear naked choke ends the match quicker than I could make that joke.

Baron Corbin attacks Joe on his way up the ramp, fights him back to the ring and hits an End of Days. Corbin may or may not be any better in the ring – we wouldn’t know because he hasn’t wrestled on TV for more than 30 seconds in months – but at least he’s showing some personality.

In what is likely the final BULL-FIT promo, Bull Dempsey tells us we’re getting the new and improved Bull Dempsey next Wednesday – another match that will be taped prior to the live airing of NXT Takeover: Brooklyn on Saturday.

The Vaudvillains came out after the match. Alexa Bliss came up the ramp and slapped the challengers twice as they tried to explain their plan to neutralize Bliss at Takeover. Despite some classic Vaudvillains mic work, we still don’t know the plan! Apparently slapping folks who have news you don’t want to hear works. Try that one with your boss next time.

Kevin Owens comes out to offer his thoughts on Saturday’s upcoming ladder match and, fittingly, he’s carrying a ladder. Subtle, Kev. Owens addresses the Full Sail crowd booing Brooklyn and goes so far as to call Full Sail THE JOHN CENA OF WRESTLING FANS. This was awesome stuff. He hardly talked about the match, but still sold the event, himself and played an amazing heel. He continued to use the crowd as a conduit for his aggression and as a motivation for beating Balor at Takeover, and it all worked. Kevin Owens is the truth. He’s the best on the mic in NXT and pretty damn close on the main roster. He has a Heyman-esque ceiling on his promo work when it’s all said and done. If you’ve ever had frustration with the NXT crowd’s self-serving chants or show hijacking, you need to seek out this promo. Not only is he incredible on the mic, he’s justified and often correct. If there’s any criticizm, its that his mic work makes it hard to hate him. This was masterwork.

The lights went out and Balor appeared sitting on the top turnbuckle – in full gear, oddly enough. Owens climbed down and the two went to fighting. Balor went to hit Owens with the ladder and Owens high-tailed it out of the ring. Balor closed the show holding the title on top of the ladder.

Final Thoughts: As expected, this episode of NXT crossed a lot of T’s and dotted a lot of I’s headed into Takeover on Saturday. Look for the NXT Takeover: Brooklyn preview later this week, follow the show live @VoicesWrestling and stay tuned for the review right after the show. Happy wrasslin’, y’all. 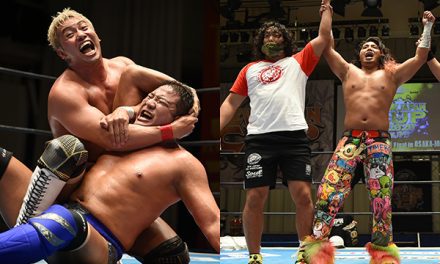 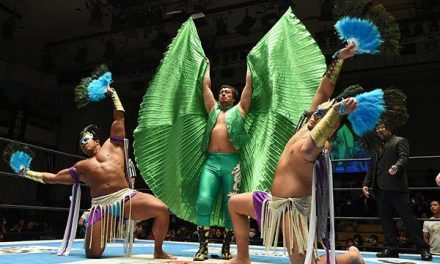