Lost in the mania surrounding the finals of New Japan Pro Wrestling’s G1 Climax is the fact that EVOLVE has a stacked double shot in New York this weekend. EVOLVE 47 featured the return of international sensation Zack Sabre Jr., he was scheduled to challenge EVOLVE World Champion Timothy Thatcher in the main event. A promising undercard was headlined by Mike Bailey vs. Chris Hero and the next chapter in Ethan Page’s war against Johnny Gargano.

With the eyes of the wrestling world fixed on Japan, EVOLVE and its talented roster made their bid for the spotlight, did they succeed or remain an afterthought?

Confession time, I goofed and forgot the show started earlier than normal so I missed most of the opening match. Thankfully, VOW reader David Naismith came to my rescue and provided the following cameo review of the opener!

Williams came out with Drew Gulak and some other fellows that look to be a new stable in WWN called “Catch Point”.  Story of this contest was that Williams had a counter to everything that Busick attempted.  This match featured some excellent chain wrestling that had the crowd really invested, then turned into a hard hitting slug fest. Tracy Williams scored the upset win when he made Busick submit to a Crossface.

This match should definitely come up if are thinking about bringing Williams back to EVOLVE anytime soon. ***1/2

Drew Gulak got on the mic and congratulated his protégé on the big win but the moment was interrupted by Rich Swann who cut a quick promo that segued way into his famous rendition of “All Night Long”.

Gulak is a mixed bag in the ring. His ventures into “Grapple Fuck” territory are painfully dull affairs, but when he wrestlers as a straight technician and picks an opponent’s arm or leg apart he thrives. The “Legal Eagle” was in the mood to stretch on this night.

The former CZW World Champion’s assault on Swann’s arm was unique.  He used dead lifts as well as the usual twists to soften said limb. Swann’s high energy comebacks provided a nice contrast to Gulak’s methodical offense and kept the crowd buzzing. Just when it looked like Swann was about to pick up the win with a Standing 450 Gulak scored a kick to the head out of nowhere. That was enough to keep Swann down for the count.

The finish was pretty sweet but made Gulak’s earlier arm work mean nothing. I mean why build that narrative up and then ditch it in the closing moments of the match? It makes no sense and can sour the perception of the contest in an instant. Anyways, nitpicks aside this a fun match that kept the crowd hot. ***1/4

A jubilant Gulak grabbed a microphone and challenged Johnny Gargano. That brought out “Johnny Wrestling” who said that there would be a time for them to fight but this weekend was all about him ending Ethan Page. Interestingly enough Gargano did not check on his best friend Rich Swann during the promo. More on that later.

EVOLVE World Champion Timothy Thatcher made a surprise appearance as Gulak was heading to the locker room. The two teased a future title match with a stare down. Thatcher brought the Open the Freedom Gate Championship with him and said that he remembered Gargano’s request that the title be retired and then vacated it. He went on to say that since he never wrestled for DGUSA  and that Gargano should be the last man to wear the belt and proceeded to hand over the belt to the its greatest champion. This promo was a quiet and dignified way to close the DGUSA brand.

Mike Bailey needs to come out to “You’re the Best Around”, it is the perfect entrance music for him.

The previous two matches kept the crowd energized so by the time the bell rang for this one the fans were molten for the first big match of the evening. Bailey came out kicking and his lightning fast offense had the slower Hero on the ropes early. Desperate to regain the advantage Hero resorted to mind games. He picked Bailey’s prized black belt up and casually tossed it to the ground. When “Speedball’s” tempter got the better of him Hero struck and started to put his size advantage to good use.

Chris Hero’s year in EVOLVE has gone criminally unnoticed in my opinion. His work rate is always excellent but this year his character work is nothing short of brilliant. No one embodies the duality of a tweener better than Hero. His mind games, customized vintage NBA jerseys and promos mocking his opponents reek of a man who believes his own hype. On the other hand he digs deep when challenged and wins all his matches clean, and if you beat him he will shake your hand.

After the nifty opening portion the match settled into a predictable pattern of a big man vs. little man match sprinkled with a good story of Bailey’s kicks doing just as much damage as Hero’s famed elbows. The smaller Canadian had the crowd behind him and scored several agonizingly close near falls. In the end size and elbows carried the day, Hero scored the pin after a nasty Rip Cord Elbow.

Mix two great wrestlers, a rowdy crowd and great character work by Hero and the result is a **** match!

Trent Baretta and Rey Horus were about to lock up for their scheduled fight but the voice of So Cal Val ensured both men would have to wait to get it on. Flanked by the Premiere Athlete Brand, Val gloated over firing Baretta from the PAB.

Baretta responded that he quit and then challenged the PAB to a tag match. His former stablemates balked at the offer until Baretta said that Val was more of a man than either of them. The vivacious redhead’s reaction was priceless.

I want to preface my comments by stating I like the PAB gimmick. Konley and Nese are freak athletes and So Cal Val has been a revelation as their manager, but something about the trio doesn’t fit the direction EVOLVE is going in. Their matches are slow, have a lot of interference and slow down the momentum of the show.

The closing stretch of this tag proves that the PAB can wrestle an exciting match. Konley and Nese both broke out long neglected impact moves and insane dives but they had too. It was hard to give a damn during the early portion of the match. Nese and Konley took turns taunting Rey Horus and putting him in rest holds. That’s not a style fits either man and it holds them back from getting over with the crowd. Because of the slow start they had to mash as many dangerous spots as they could into the match’s final minutes, no one should have to work that hard in a filler tag match. Nese got the pin on Rey Horus after a 450 Splash.

Other than the usual PAB garbage this was a good spotfest. ***1/4

My wish list for a professional wrestling street fight is very simple, I just want two guys who hate each other to fight. No melodramatics or digging for buried treasure under the ring, just a good old brawl fueled by disdain. Gargano/Page came so close to doing that.

In a touch the hard makers will love, both guys came to the ring dressed to work construction and not to wrestle. The fists started flying early and the action spilled all over the arena. Each man was willing to break his own body in order to destroy his opponent, a sentiment highlighted by Gargano’s Somersault Senton off of the bar.

Ethan Page was on fire during the match. “All Ego” is great at playing a cocky, prick heel with unlimited wit. This match showed he can be a psychotic mother fucker as well. Watch the sequence where he pulls out a rope and chokes Gargano with it. The look in his eyes is chilling.

The match was moving along well until Rich Swann hit the ring and swerved us all by turning heel and helping Page win the match. To be fair, I think his turn fits in perfectly within the context of the feud. Page is trying to make Gargano’s life a living hell and turning his best friend against him is a great way to do that. The moment wasn’t right though. Gargano is scheduled to face a mystery opponent of Page’s choosing at EVOLVE 48. Flip the events and the turn is perfect. Do it out of order and it feels awkward, which this was.

Without the odd booking this would have been a low-level MOTYC. Even with it this was a fun brawl that added another chapter to a feud I am really enjoying. Not a bad consolation prize at all. ***3/4

Post-match, Swann explained his reason for stabbing Gargano in the back. In Swann’s opinion Gargano’s actions in the second half of his first Open the Freedom Gate title reign made him a bad person and proved he was only out for himself. Swann was tired of being in his shadow and decided to change things. To pour salt in the wounds Swann fastened the Open the Freedom Gate belt around Page’s waste.

At its core this contest was a chess match between two technical masters. Each early trip to the mat resulted in a stalemate, except for one exchange where Thatcher locked in a brief but painful Ankle Lock. With no clear advantage each man went back to the drawing board.

ZSJ showed the world his fists are just as lethal as every submission hold in his arsenal. Some of his slaps on Thatcher were cringe inducing.

Thatcher kept targeting the ankle with while keeping an eye for just one chance to lock in his patended arm bar.

Both men are known for their arm bar and there was a portion of the match where they tried to best one another to see who was more proficient with the hold. Sabre Jr. dominated that portion of the match but became fixated on finishing the champion with it. His temporary fall into obsession cost him the title. After going for the same hold over and over Thatcher was able to catch ZSJ and counter into an arm bar of his own. Even when got to the ropes ZSJ seemed convinced that the game of arm bars would continue. For a second that was true…until Thatcher feinged going for the arm but instead locked in a hold on ZSJ’s injured angle, leaving him with little choice but to tap out.

During ZSJ’s EVOVLE run he has always been able to out think his opponents and find ways to trick them into opening their guard. Roderick Strong and TJ Perkins fell for it but Timothy Thatcher did not. In fact, Thatch beat him at his own game which further cements the champion’s claim of being EVOLVE’s ace.

Fantastic main event with an equally as fantastic story. ****1/2

Final Thoughts: Aside from some clunky booking EVOLVE 47 was another day at the office for the promotion. While it may not match the acclaim of EVOVLE 45 or steal New Japan’s thunder this weekend, the show was the next in a consecutive quality outings for Gabe and company. The main event was a technical masterpiece and set up Thatcher as a crafty champion. Bailey vs. Hero would have a stolen the show on any other night. Tracy Williams had a breakout performance and the Page/Gargano saga moved along smoothly.

For any fan looking to cure their G1 hangover start with EVOLVE 47. 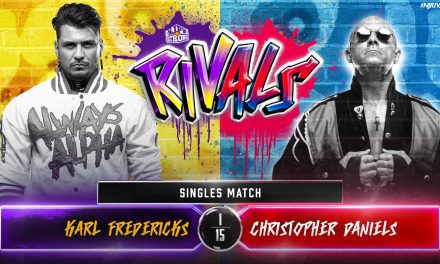