I’ll be in Cleveland this weekend for Wrestle Geek Fest, so come say hi! Due to travel, Chris Jericho’s Friday podcast will be included in next week’s Podmass, along with anything else that may pop up today. No flagship Voices of Wrestling podcast timestamps this week either, as I’m saving the show for my trip.

The podcast week in review, brought to you by Public Morals (or Amazon & WWE Shop)!

Talk n’ Shop #57 (8/8/15): It’s the Bullet Club on a bullet train, as the crew (Rocky, Doc, Karl, & AJ Styles, plus cameos from Tama Tonga and Beretta) records a show on the way to the airport. The show was recorded right after New Japan Pro Wrestling DOMINION, so everyone is on a high after the Okada vs Styles main event, which gives the proceedings an even more jovial atmosphere. Nothing much of note is said, but it’s the usual good time. THUMBS UP

MLW Radio #190 (8/9/15): AAA’s Jack Evans and Angelico join Court and Konnan to help hype Triplemania. They talk about how both men found their way to AAA, living in Mexico, burying Raven, Cyber Kong at adult establishments, Jack’s Mortal Kombat skills, psychology in Lucha, backstage shenanigans at LU, the dark mind of Australian Suicide, name association, and a lot more. Very fun show with a lot of stories and trash talk. And appropriately, there’s an audio slip up, as a commercial for Triplemania plays in the middle of the show while everyone’s talking. THUMBS UP & BEST OF THE WEEK

Steve Austin Show #245 (8/11/15): This is the audio of the Paige interview that aired last week on the WWE Network. If you didn’t hear it, it’s an OK chat that runs out of steam as it goes along (Austin even apologizes for being discombobulated). Steve adds an epilogue but doesn’t say much, so if you heard it on the Network there’s no need to revisit it here. THUMBS IN THE MIDDLE

Human Podcast Machine Reaction show #25 (8/11/15): Taz reacts to Raw, in theory, as he lightly touches on the show, but also delves into thoughts on the NXT/ROH rivalry, and an excruciating discussion on the difference between a T-Bone suplex and an exploder. I’m usually a stickler for such things but even I was throwing my hands up by the end. A bit of a mess; Taz does much better when focused on a single topic. THUMBS DOWN

The Ross Report #78 (8/11/15): Ross doubles up this week, as first he is joined by Brian Solomon, who used to work for the WWE is the author of “Pro Wrestling FAQ.” The book discussion with Solomon isn’t much, but he does have some good stories about Vince McMahon and Ric Flair. Up next is Paul O’Brien, author of the “Blood Red Turns Dollar Green” series (as well as JR’s upcoming book). They discuss the books, the research O’Brien put into them, feedback he’s gotten from wrestlers, and the series’ potential future on television. I’ve heard O’Brien on other shows and there’s not a lot new here, but it is an interesting discussion on marketing wrestling material to non-fans. [Solomon’s interview starts at 21:00, O’Brien’s starts at 57:11] THUMBS IN THE MIDDLE

WOOOOO™ Nation #14 (8/5/15) The guest this week is… Ric Flair. Flair was in the midst of traveling to Roddy Piper’s funeral, so he and Conrad just open up the mailbag. Lots of discussion about John Cena potentially breaking his record, Wrestlemania VIII, regrets, biggest bar tabs, laughing during a match, David Flair, what drove him, different kinds of rings and ropes, if Carlito was pissed at Flair’s epic promo on him, who would ne the Horsemen today, the joys of wrestling in Florida, Wahoo McDaniel, promoters, the fighting prowess of Haku, and a lot more. This was a fun diversion from the usual format, and I would have no problems if they revisited it down the line. THUMBS UP

Talk is Jericho #166 (8/12/15): Sasha Banks joins Y2J this week. They talk about the Diva Revolution, being Snoop Dogg’s cousin (!) and going to Wrestlemania with him, winning a fantasy camp to train at Chaotic Wrestling, her huge Eddie Guerrero fandom, following your dreams, learning from Dusty Rhodes, being called ratchet, the Four Horsewoman (of NXT), and a lot more. Sasha has always come off as very likeable, but you’ll end up liking her even more after this show. [Banks’ interview starts at 19:02] THUMBS UP

Art of Wrestling #263 (8/13/15): Colt begins his annual series of live shows from the Edinburgh Fringe Festival. The multiple guests include Brendon Burns (comedian and Colt’s co-host), Sha Samuels (UK wrestler), Carl Hutchinson (comedian), and Grado (Grado). It’s an OK show – no one bombs but I can’t say any guest is a must-listen. And it looks like we’re in for a few more weeks of this level of show. THUMBS IN THE MIDDLE

Steve Austin Show – Unleashed #246 (8/13/15): Vampiro is the guest this week. He and Steve talk a lot about the match with Pentagon Jr. (who Vampiro thought was going to drop the ball, interestingly), the structure & story, how being hit with light tubes set on fire feels (spoiler: bad), and the reaction backstage. The front half of the show is all about Vampiro’s early days, his musician days, being a bodyguard for Milli Vanilli, learning from Abdullah the Butcher, the Vampiro gimmick, his rock star wrestling days, drugs, and more. Vamp is nothing if not compelling, and while there may be some embellishment here he definitely comes across earnestly. THUMBS UP

The Jim Cornette Experience #89 (8/13/15): No interview this week, as Jim and Alice catch up and run down the Charlotte Fanfest, the death of Roddy Piper, and Jim’s quasi feud with Vader. Then we get the usual shots at Vince Russo, the Young Bucks, Hulk Hogan, and Donald Trump. If you can’t tell from that description, this one’s a pass. THUMBS DOWN

AAA Triplemania XXIII Postmortem (8/13/15): Court Bauer apologizes for the technical difficulties that plagued Triplemania and explains some of them in more detail. He also touches on the fact that creative was also poor, which surprised me. At seven and a half minutes it’s a quick listen, but the real main event will be this week’s MLW Radio. THUMBS UP

Human Podcast Machine Reaction Show #26 (8/13/15): Taz reviews this week’s NXT, but spends as much time talking about Frank Gifford and Geno Smith. The second half is a Taz Tale about Taz meeting Paul Heyman for the first time, which isn’t nearly as interesting as you’d think. THUMBS DOWN 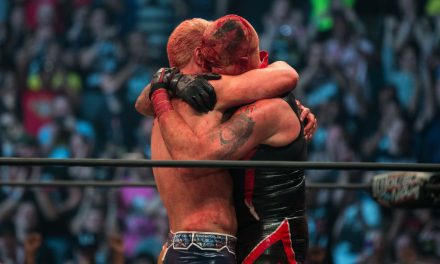